The Anatolian Shepherd Dog is originally from Turkey, but American breeders were engaged in the formation and recognition of the breed. Dogs of this breed have proven themselves well in guarding and patrolling, they can hunt large wild animals and are excellent helpers for shepherds. They can rightfully be considered the most popular sheep breeders and shepherds. It is currently not an FCI-recognized breed. 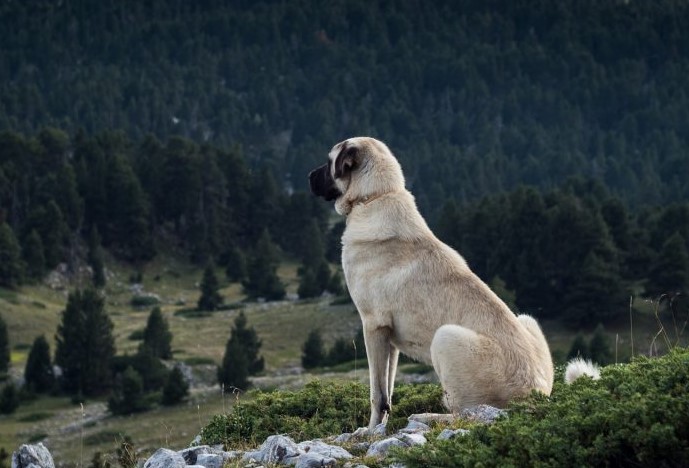 Anatolian Shepherd Dog is one of the most ancient breeds. Her ancestors – large dogs, resembling in appearance Great Danes, lived even during the existence of Babylon. They were used to hunt lions and horses, and over time became the protectors of flocks of sheep. The glorious history of these dogs is reflected in the frescoes and bas-reliefs that can now be seen in the British Museum.

Breeding the breed took more than one century – Hounds participated in the breeding of the Anatolian Shepherd, which made his physique lighter and added speed to him. Perhaps even wolves took part in the emergence of the breed. This is probably why the dog looks so serious. The name “Anatolian Shepherd Dog” was not assigned to the breed by accident. Most of her ancestors worked on the Anatolian plateau, and it was from here that people began to export dogs to other countries.

It is interesting that in Turkey there are several varieties of this breed – Kars, Akbash, Kangal. Another interesting fact: according to some dog handlers, the breed actually appeared in Belgium. There is no exact evidence of this in history.

Dogs came to Europe and America in the second half of the twentieth century, where they became faithful companions of man and guards of housing. Despite the centuries-old history, the Anatolian Shepherd was officially recognized only in the 90s of the twentieth century. This is a rather rare breed and still, the largest number of its representatives lives in Turkey. 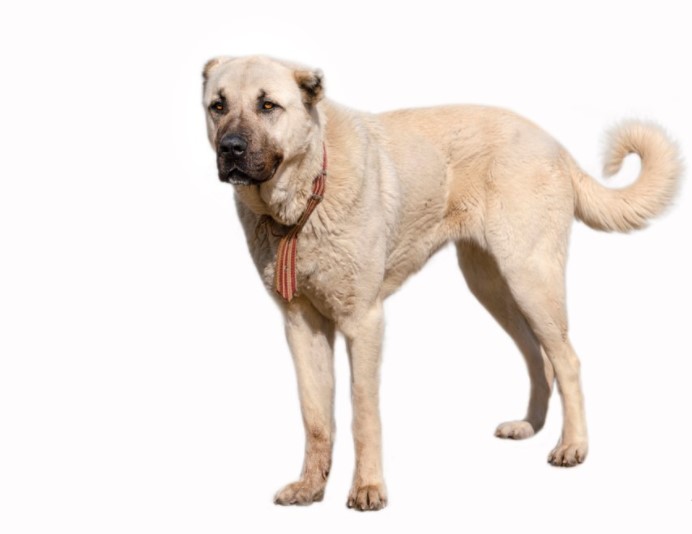 The Anatolian Shepherd is a large, powerful dog that demonstrates strength, agility, and endurance in all its appearance. The skeleton of the dog is strong, the muscles are well developed. The growth of males is 75-80 cm; females -70-79 cm. Weight of males 60-65 kg; females – 40-55 kg.

The head is large enough, powerful. almond-shaped eyes of medium size. color can only be brown from light to dark shade. The eyelids should not be loose or saggy, well pigmented. ears set low, hanging on cartilage, about 10 cm long, with rounded tips. A noticeable furrow descends from the forehead between the eyes. The jaws are strong, the lips are slightly pendulous. The neck is slightly arched, strong and muscular, of medium length. the skin on the neck forms a slight dewlap. In general, the body is very well built. deep chest. the belly is noticeably tucked up. The tail is long, in a calm state it can be slightly curved, in an excited state it rises to the back. The topline is curved, gradually descending behind the withers, rising on the croup, and then dropping to the tail. The hind legs are distinguished by wide, strong thighs, the front legs are relatively long and straight. Feet with well-curved toes, oval in shape.

The coat is short and loose. the length of the hair on the body is about 2.5 cm, on the shoulder blades, thighs, and neck it is slightly longer, up to 4 cm. The undercoat is very short and dense. Any colors are allowed. Preference is given with reddish-brown and beige. 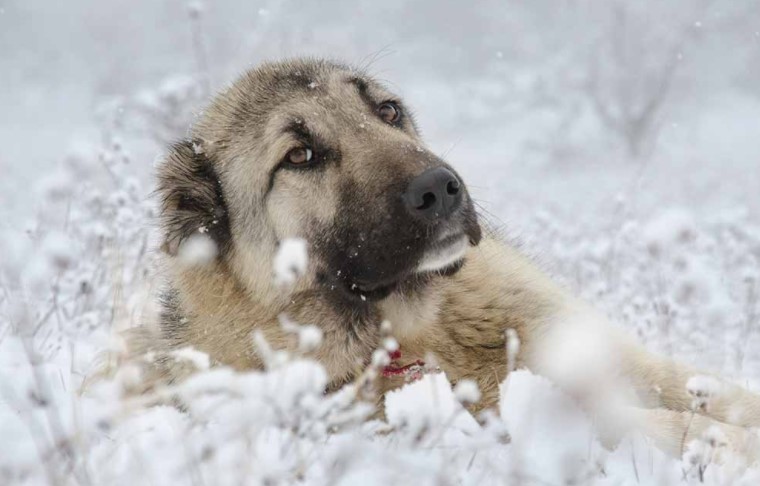 Although the dog has a rather stern appearance, meanwhile, it is a very loyal, affectionate, and gentle animal, with a gentle character. At home, the dog is not at all aggressive, often tries to dominate, but shows independence. Anatolian Shepherd easily gets used to the owner and new habitats. He is wary of strangers. Expression of emotions is not typical for this breed of dog, although the pet perfectly captures the intonation of the owner. Anatolian Shepherd is distinguished by a sharp mind, confidence, courage, dedication, and reliability. The dog has an excellent memory, the dog will not forget the insult and will always remember his friends. Anatolian Shepherd is careful and prudent with an instant reaction, these qualities are necessary for him to work, to protect the herd on his own.

The Anatolian Shepherd loves to dominate. Considering himself a leader, he is always ready to defend all family members and animals, whom he considers his charges. Along with this, the dog may show aggression towards strangers, perceiving them as a potential threat. The pet treats all family members well, especially children. 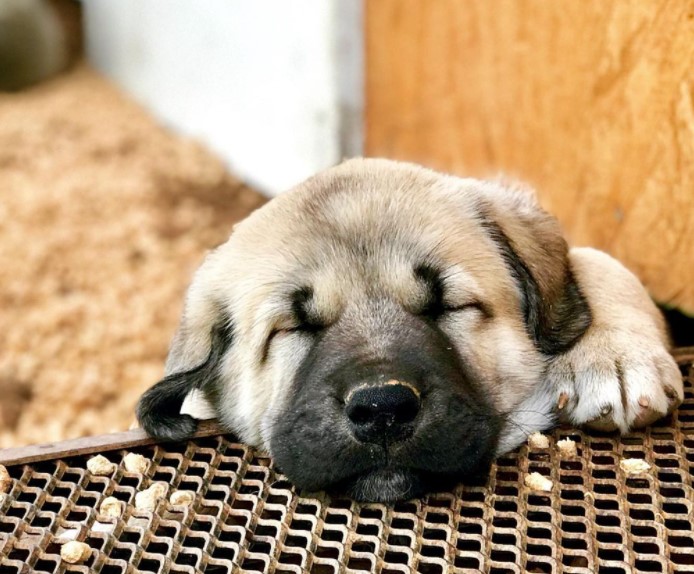 Anatolian Shepherd is a watchdog, so it does not need to be kept on a chain, because it can become uncontrollable and very aggressive. It is best to allocate for him a securely fenced area of ​​the territory, providing complete freedom of movement. The dog perfectly tolerates any weather conditions. Anatolian Shepherd Dog is a very beautiful and noble breed of dog, which is best used for guarding, rather than just as a pet for the whole family.

To prevent tangling of the coat, brush it twice a week. The dog does not need to be washed often, only when necessary. Care should be taken when combing out the undercoat during shedding. The dog has a white coat.

Anatolian Shepherd Dogs are usually unpretentious to food. they should be fed with a well-balanced diet, moderately high in protein and fat. In Turkey, dogs are preferred to be fed with natural food, while in America, most Anatolian Shepherds eat ready-made dry food. most manufacturers produce rations that are appropriate for the size of the dogs: small, medium, large and giant. The Anatolian Shepherd is a giant breed. 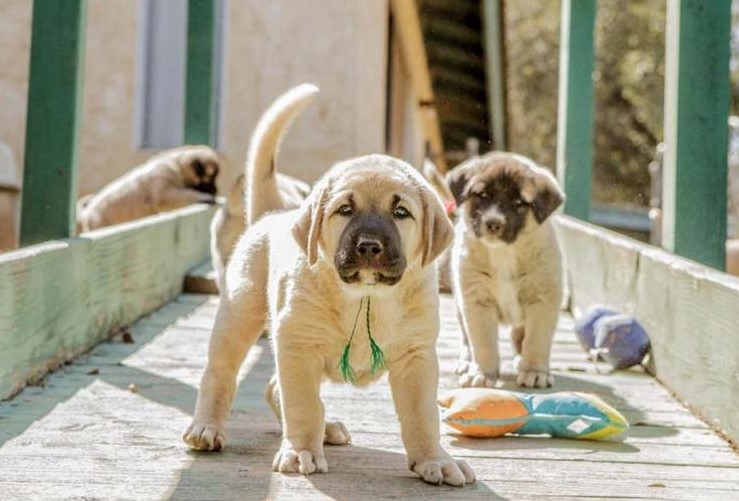 Most often, Anatolian Shepherd Dogs suffer from hip dysplasia. The predisposition to the disease is inherited, and therefore breeding producers are recommended to be checked for carriage. In addition, large breeds are prone to bloating and volvulus. This is a dangerous condition, which can lead to death in a few hours, and is provoked by an improper diet. Anatolian Shepherd Dogs are sensitive to anesthesia. Otherwise, they are strong, hardy dogs with good immunity. Life expectancy is 10-11 years.