The cichlid family has a wide variety of species. In it, you can find both real giants and very small fish. Dwarf Apistogramma cichlids belong to the second group and are certainly one of the most beautiful aquarium fish. But, in addition to beauty, they are also distinguished by a calm disposition and the most interesting forms of behavior: for their size, fish have high intelligence.

Apistograms are a group of ray-finned fish from the Tsikhlov family that live in the waters of South America. A distinctive feature of these fish is their small size – usually no more than 7 cm – and a bright rainbow color of the body, most pronounced in adult males. Females and juveniles are much more modestly colored.

The group’s Latin name comes from the Greek words “rapist” (fickle) and “gram” (line). This is due to the fact that their lateral line (an organ that catches water vibrations), stretching horizontally from head to tail, has its own characteristics for each species: it may be barely noticeable, in the form of a dotted line or another pattern.

The taxonomy of fish has been repeatedly changed and supplemented, some species have changed more than one name.

Under natural conditions, apistograms prefer small rivers with a weak current, a sandy bottom, and a large amount of aquatic vegetation. They live in shallow water near the coast. There, the fish are hiding from predators. Despite their diminutive size, apistograms are territorial fish like most cichlids. Having occupied a small area, they jealously guard it against relatives and drive away uninvited guests with lightning-fast attacks, which, however, have one goal – to scare, and do not cause any harm to other fish.

Apistograms are small predators. They feed mainly on insects, plankton, and detritus.

Due to their size and color, they are one of the most popular aquarium fish. But they are quite sensitive to the conditions of detention, therefore, before starting such a pet, it is better to acquire some experience in aquaristics. 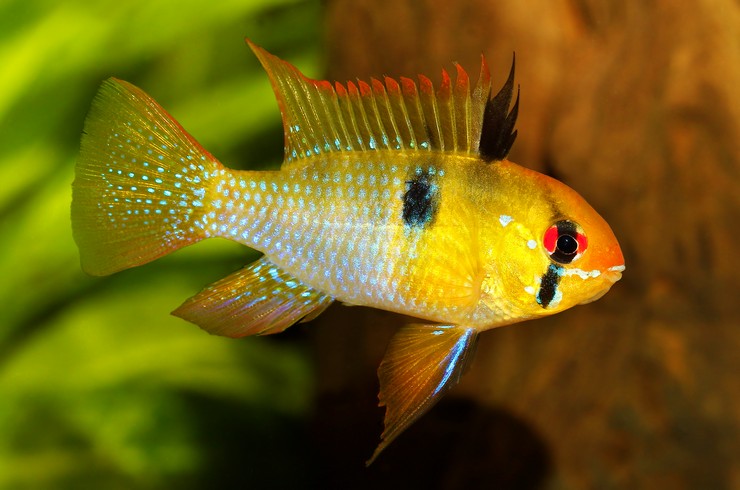 Apistograms have a moderately elongated and laterally compressed body. The head is pointed, with large eyes. These dwarf cichlids range in size from 3 to 12 cm. Males are larger than females. 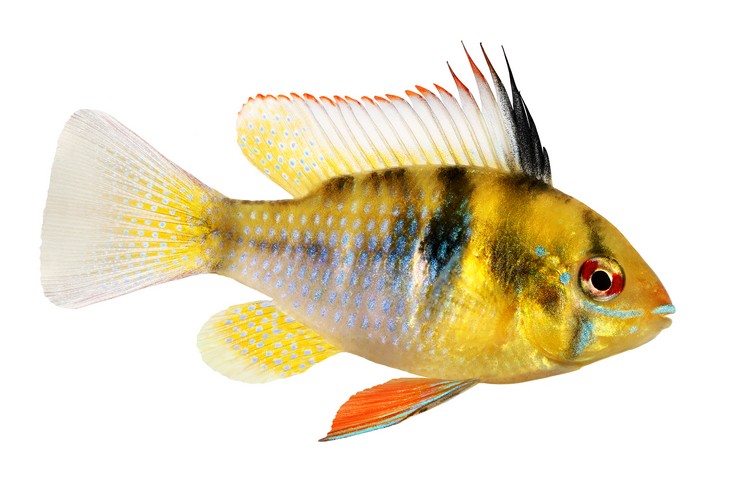 The most important feature of apistograms is their color. It is bright, juicy, and versatile, which makes these small fish noticeable despite their size. The torso often contrasts with the fins. The latter is characterized by a bright border or black rays. Breeders have obtained forms with veil fins.

Almost all colors can be present in the color: yellow, blue, red, turquoise, etc. Numerous breeding forms have been developed. For example, the Apistogramma of Ramirezi Electric Blue has a solid “neon” color.

The color intensity of apistograms directly depends on their mood. The males, ready to spawn, show themselves in all their glory, showing all possible shades. In a state of aggression in fish, the sides and abdomen darken.

Sexual dimorphism in this group of species is usually pronounced: males are larger, brighter, and have long, pointed fins.

The most popular species in the aquarium hobby. It occurs naturally in Venezuela and Colombia. The maximum size is about 5 cm.

The main color of the body is yellowish-red, turning into blue closer to the tail. Dark spots are located behind the gills closer to the dorsum. The iris of the eyes is red; a dark vertical stripe passes through them on both sides. The fins are gold or reddish with blue dots. There are several breeding varieties (balloon, veil, electric blue). 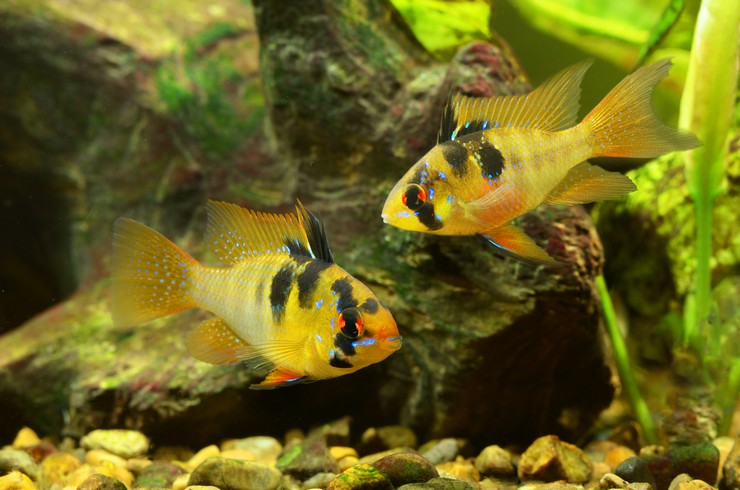 For maintenance, an aquarium of 40 liters or more is required. They love soft, slightly acidic water, without pollution. Get along well with the most peaceful fish species.

This artificial variety of Ramirezi’s Apistogramma was obtained as a result of the long and careful work of breeders. Its distinctive feature is the bright blue color of most of the body. Only the head has a brownish-orange tint, the iris of the eyes is red. A school of these fish looks very impressive in an aquarium. The maximum body length is 6 cm. Females are not inferior in color to males. For maintenance, you need an aquarium of 40 liters or more. Water is best used soft and sour. Get along well with calm species of fish. 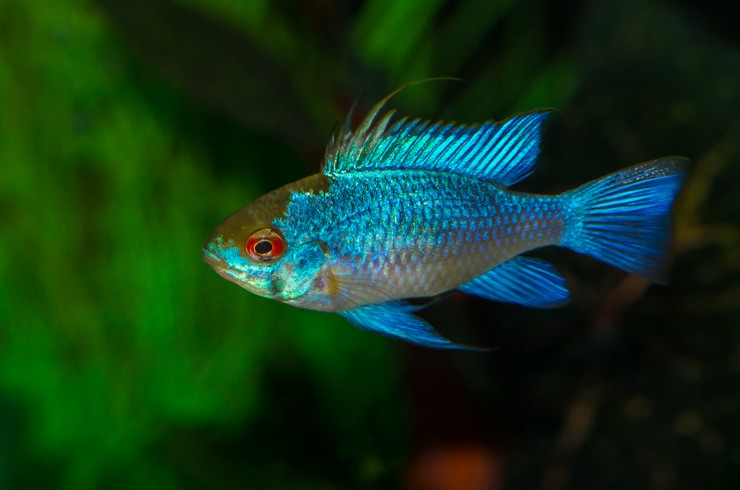 Another selective form of the Ramirezi Apistogramma with well-developed and elongated fins. Their presence imposes slight restrictions on the conditions of detention. For example, you cannot use decorations with sharp edges when decorating. Fish are not suitable for living together – those who like to pluck fins, for example, Sumatran barbs.

Lives in the central part of the Amazon. The maximum size is 8 cm. The color is quite variable. The main body color can be greenish, blue, or brown. The abdomen is yellow or pink.

The central ray of the caudal fin is very elongated, so the tail is shaped like a diamond. A horizontal dark stripe stretches along the entire body; numerous turquoise spots are present on the head. 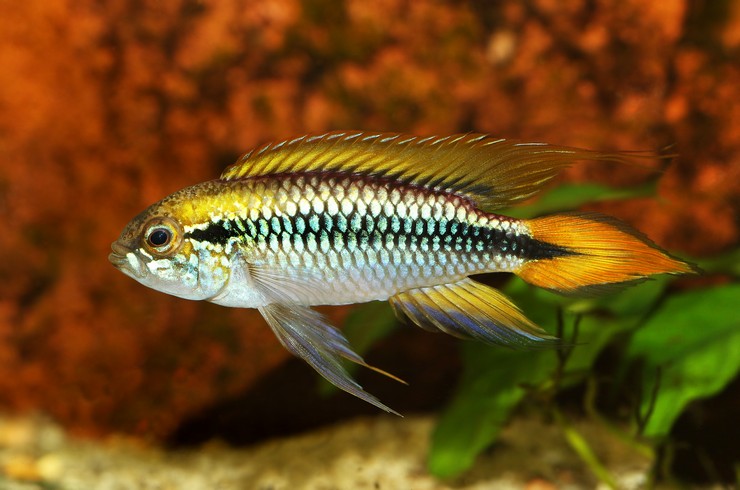 For maintenance, you need an aquarium of 40 liters or more. It is considered the hardiest species among apistograms. Water needs soft and acidic. Peace-loving fish, however, during the spawning period, will actively drive away uninvited guests from the clutch.

Found in southern Brazil, Paraguay, northern Argentina. The maximum size is 7 cm. It is a polychrome species, that is, the color of the fish depends on the region of residence. Usually, blue and yellow tones with turquoise spots on the head predominate. The bases of the fin rays are usually blue and the fins themselves are yellow. During spawning, the coloration of males and females becomes almost the same, differing only in intensity.

The Borelli Apistogramma is a polygamous species that need a large area, so it is best to opt for aquariums from 50 liters. Like other apistograms, this species requires soft, acidic, and warm water. 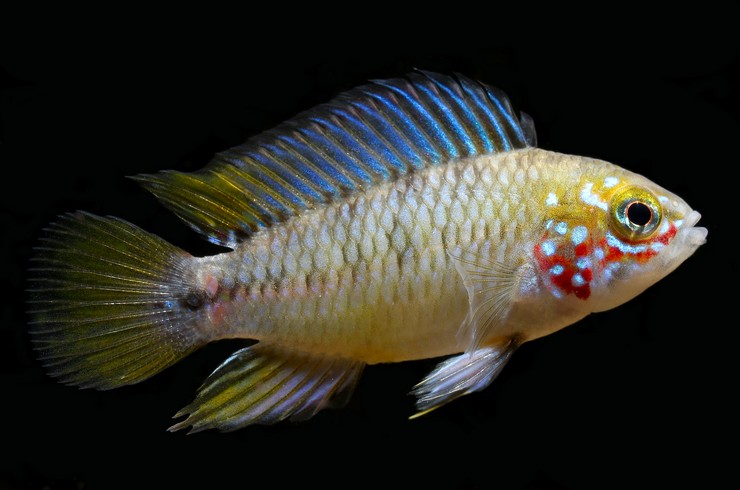 Found in Brazil and Bolivia. This species is easily distinguished from its relatives. First of all, cockatoo apistograms are larger than other species and have an elongated body. Males grow up to 8 cm, females – up to 6. Sexual dimorphism is pronounced. Males are not only larger and brighter in color, but they are also distinguished by the long and sharp rays of the dorsal fin, giving them similarity to the crest of a cockatoo parrot. The color of the fish is variable. The main body color is gray, sometimes with a greenish tint. There is a wide dark stripe on the side. Fins can be from fiery orange to red with black dots. Anal and pelvic fins are blue-yellow.

For maintenance, you need an aquarium of at least 70 liters. It is necessary to provide high-quality filtration and aeration. Numerous shelters will be useful. The water is suitable from slightly acidic to neutral. Hardness should not exceed 19 dB. 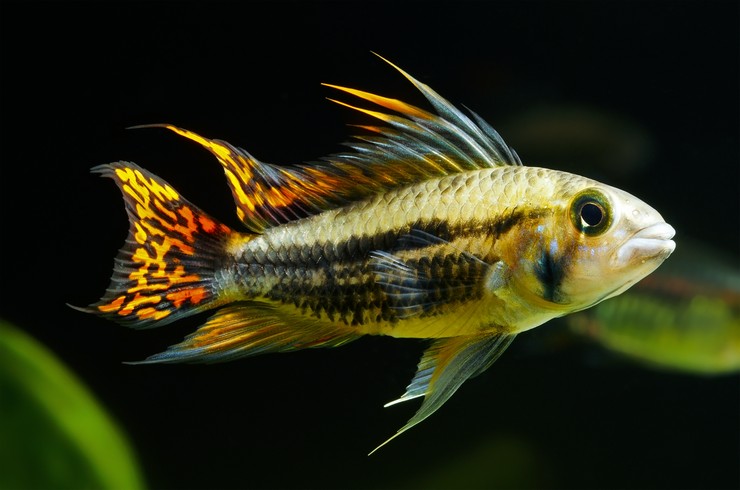 In nature, the fish lives in Bolivia and Brazil. Outwardly, it is very similar to the popular Ramirezi Apistogramma, but the color of the fish is not so bright. The size of an adult is up to 8 cm.

The main body color is pale yellow, the head and chest are bright oranges. There is a black spot in the middle of the body, a dark strip stretches across the eye. On the back of the body, vertical gray stripes are visible, extending to the tail. 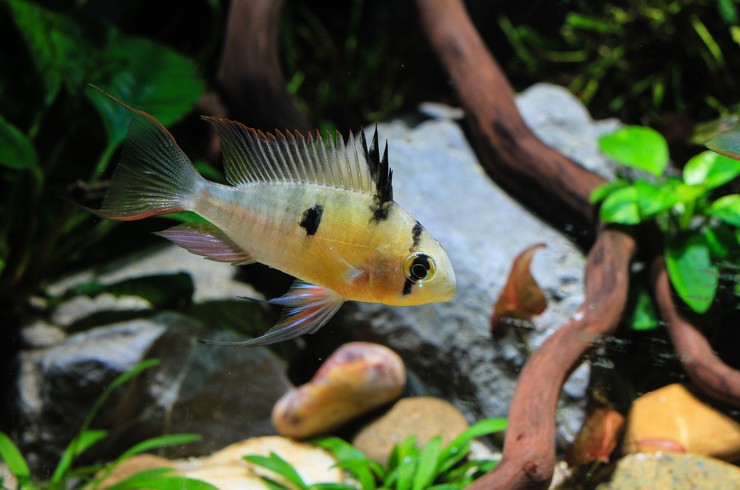 Sexual dimorphism is not pronounced. An interesting fact: the formed couples remain faithful to each other all their lives. And the pairs formed by the aquarist are often unstable and can eat their eggs.

They are distinguished by a calm disposition. To keep a couple of fish, you need an aquarium of 40 liters or more. Sandy soil and a large number of living plants are required.

For the comfortable keeping of most types of small apistograms, you will need an aquarium of at least 40 liters per pair of fish. For larger species – at least 70 liters.

The fish look best in an aquarium decorated as a natural biotope. Sand or fine pebbles are used as soil. It is necessary to plant dense bushes of aquatic vegetation along the walls. To divide the territories between several groups of fish, put a variety of shelters in the aquarium – driftwood, pots. A couple of flat stones will not be superfluous, they will become a great place for spawning. To enhance the color, you can put fallen leaves on the bottom. And to create the effect of “dark” tropical water, use the Tetra ToruMin conditioner. 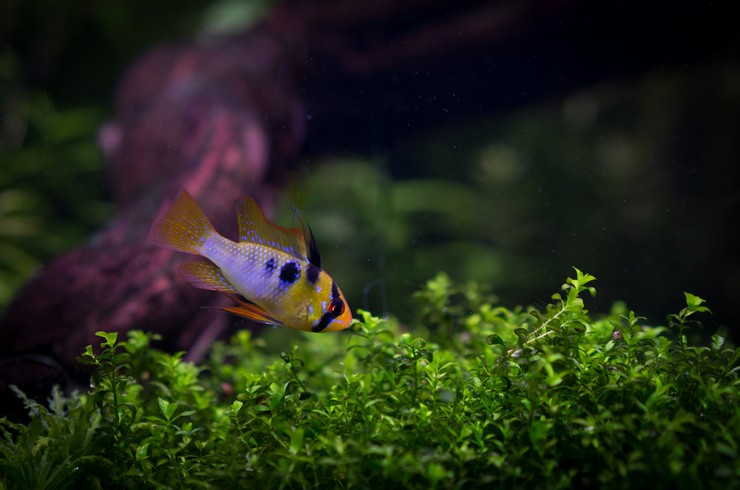 Apistograms are very sensitive to the content of nitrogenous compounds in the water, so the aquarium should be equipped with a powerful filter (preferably external) and a compressor. Water changes are necessary once a week – up to 30% of the volume of the aquarium. Apistograms are heat-loving fish, a comfortable temperature for them will be 25-30 ° C, so a thermostat will also be needed. In cool water, fish are highly susceptible to disease. They do not like apistograms and bright lighting, so it is better to launch floating plants on the surface of the water.