All the species diversity of Lake Malawi cichlids can be divided into two main groups – Utaka and Mbuna. The first group includes cichlids that live in open water and feed mainly on plankton and small fish. But Mbuna cichlids are real vegetarians, whose diet consists mostly of plant foods. The features of behavior, food addictions, and care for these interesting cichlids will be discussed in our article.

Mbuna is a group of cichlids from Lake Malawi, whose life is closely associated with the rocky shores of the reservoir. Even the very name of the group, loosely translated from the language of the natives, means “fish living by the rocks.” Why are unfriendly rocky gorges so attractive for these fish? The fact is that the food resources of Lake Malawi are rather limited, and in order to survive in such extreme conditions, some cichlids have switched to feeding on algal fouling that covers the coastal rocks. It was they who formed the group that we know as Mbuna. To make it easier to scrape off algae from stones, the mouth apparatus of fish has changed: the teeth of these cichlids resemble a grater. 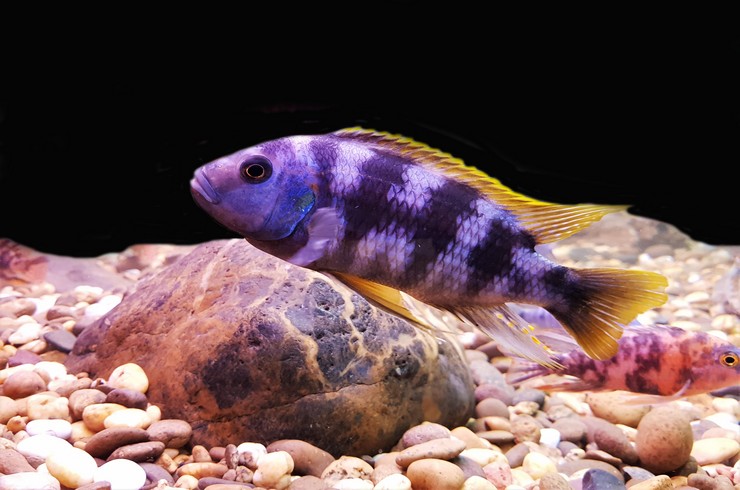 The limited food supply led to the development of a pronounced territorial instinct in fish. The area occupied by cichlids is zealously guarded against all uninvited guests. This point should be taken into account when choosing an aquarium and neighbors for Mbuna cichlids so that it does not accidentally happen that the strongest fish will kill the rest.

Another important evolutionary adaptation in Mbuna cichlids is the incubation of eggs in the mouth of females. Moreover, even the newly born fry hide in the mouth of the mother for the first time if something threatens them. Such care for the offspring allows you to preserve it as much as possible.

But in addition to interesting forms of behavior and an entertaining way of breeding, Mbuna cichlids have an amazing color. Species with different shades of blue are especially famous, which makes fish similar to marine species. There are also yellow and orange representatives. The endurance of these rather large fish also adds popularity. 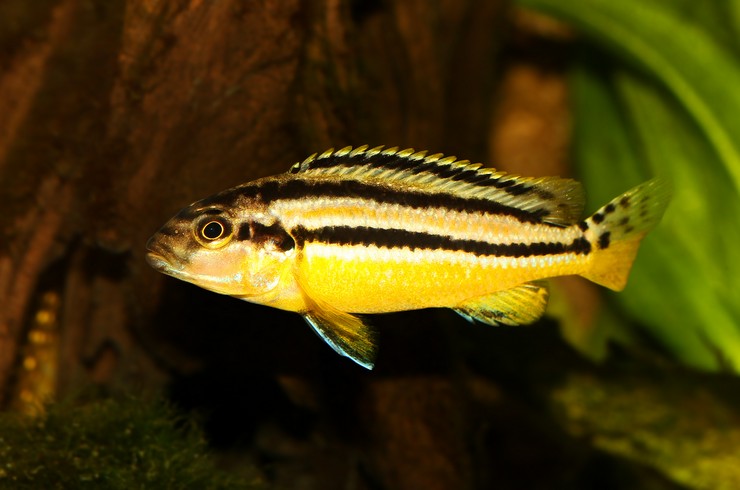 The color of Mbuna cichlids is extremely diverse. There are fish with blue, red, yellow color. Almost everyone has stripes of varying severity on the body.

Mbuna cichlids are endemic to Lake Malawi in Africa. This reservoir is of tectonic origin and, in fact, is a crevice resulting from the rupture of the lithospheric plate. After filling the rift with water, the original species of cichlids settled here, which, after millions of years in isolation, formed a huge number of species. Lake Malawi is the second deepest lake after Lake Baikal and belongs to the group of African Great Lakes. 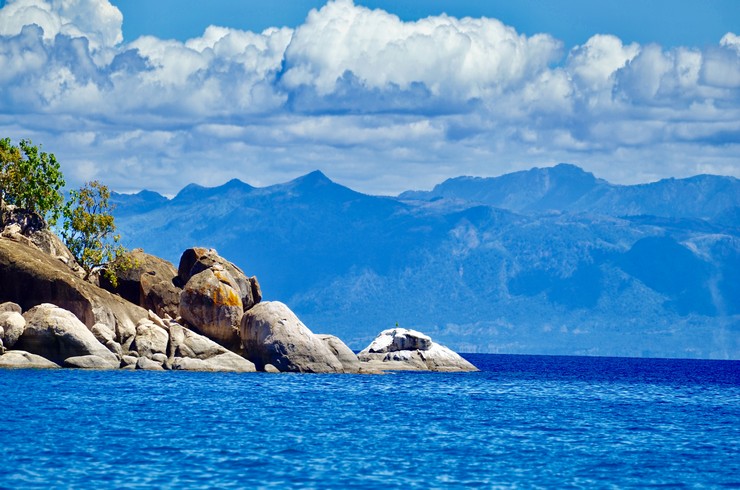 To keep Mbuna cichlids at home, you need a spacious aquarium. It is best if its volume is at least 150 liters. The more fish you want to house, the more spacious the container should be.

But there should be no problems with decorating the aquarium. The design of cichlids is usually quite ascetic and is a heap of stones and snags, from which many shelters should be created. In most cases, planting live plants in an aquarium is impractical, because Malawian cichlids will eat or dig up delicate leaves. The only exceptions are rigid-leaved species, for example, Anubias or Cryptocorynes. 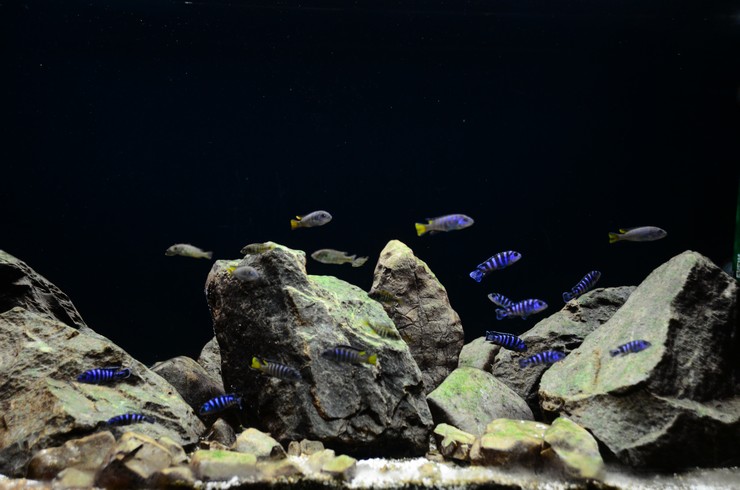 The soil is used with sand or medium-sized pebbles. Many Mbuna cichlids like to dig up the soil and arrange the landscape as they please.

Cichlids of the Mbuna group require clean, transparent water, rich in oxygen. Therefore, you will need a powerful external filter and compressor.

The waters of Lake Malawi are highly mineralized, and the hardness values are quite high. Marble chips or natural corals can be placed in the aquarium to keep them at a sufficient level.

Water changes up to 20% of the aquarium volume are required once a week.

A common problem for aquarists with Mbuna cichlids is territoriality. Fish that have occupied a certain area are extremely hostile to any intrusion into these limits. Males especially do not tolerate each other. If a fight breaks out, females may also be caught. This is why it is best to keep the Mbuna cichlids in a species aquarium. It is necessary to provide enough shelter so that weaker individuals can hide from the aggressor. 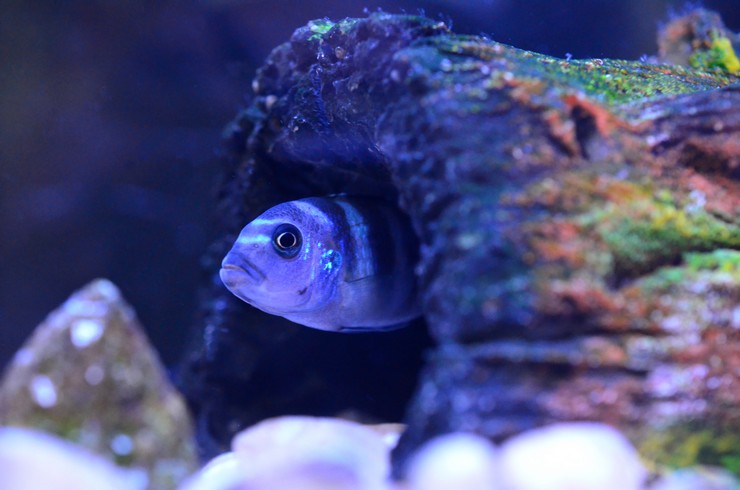 Other species from the Mbuna group are best suited as neighbors in a shared aquarium. The main thing is that they are approximately the same size, and the number of females exceeds the number of males. It was noted that if the fish grow together from an early age, interspecific aggression is manifested much less frequently.

The natural diet of Mbuna cichlids is mainly represented by algae growing on rocks, as well as various invertebrates that live in this fouling. This means that when keeping fish at home, a special diet will be required, which will be rich in plant components.

Very often, Mbuna cichlids, considering them to be predators, are fed only with high-protein live or frozen food (for example, bloodworms). Unfortunately, this can cause disease in the fish known as Malawi bloating. It manifests itself in swelling of the body, bulging of the eyes, the belly hardens. In most cases, the fish die. It follows that plant foods play an extremely important role in maintaining the health of this group of fish.

The best option for feeding Malawi cichlids is high-quality dry food with the addition of algae. Especially for lovers of Malawian cichlids, Tetra has developed a special food – Tetra Malawi. It is produced in the form of flakes and granules and consists of 40% selected algae (spirulina, nori, chlorella), which fully satisfies the nutritional needs of herbivorous cichlids.

Tetra Cichlid Algae Mini is very palatable. The green portion of the nutrient balls is the spirulina algae concentrate required by Mbuna cichlids for digestion comfort.

A good alternative is TetraPro Algae chips, which also contain spirulina and are made with a gentle technology that allows you to preserve even more nutrients and vitamins.

Egg development takes place in the mother’s mouth and can take 2 to 4 weeks. The female does not feed at all at this time. As soon as the caviar ripens, the fry is shown. The fecundity of a female can reach 50 eggs, a larger number is difficult to place in the mouth. 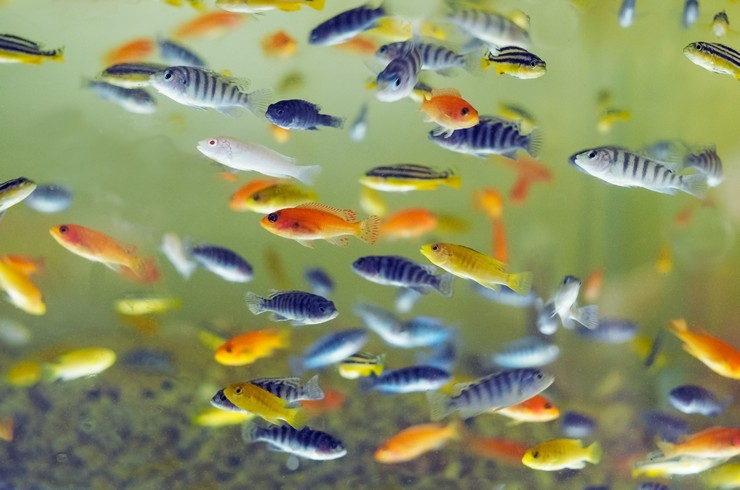 The fry for some time after hatching are near the mother and at the first sign of danger they hide in her mouth.

Sexual maturity in Mbuna cichlids occurs at about one year of age.