Australian Shepherds are considered to be dogs with not only outstanding looks but also a sharp mind and excellent performance. The homeland of these dogs is the United States, although the name of the breed is associated with Australia. Another name for the breed is Aussie.

Australian Shepherds are of average height, from 46 to 60 cm, the weight of an adult dog can reach 30 kg. Initially, their purpose was to graze and guard livestock in the pasture. Over time, they became excellent companions, became famous for their calm temperament and cheerfulness. The keen mind of the representatives of this breed made it possible to use them for official purposes. Australian Shepherds are working to find people, illegal substances, as guide dogs. 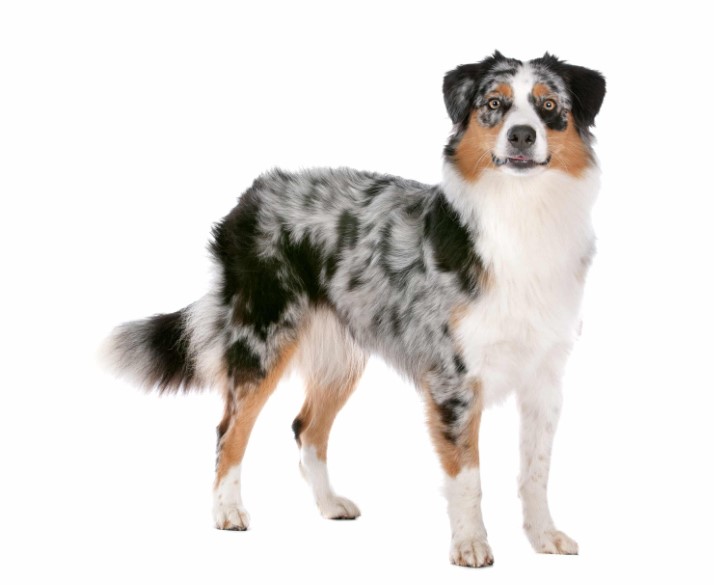 The body of the Australian Shepherd is quite lean, with a well-developed bone. The head and body are proportional. The head itself has a regular shape with a pronounced transition from the muzzle to the forehead, the back of the head protrudes slightly. The eyes are almond-shaped, brown, or blue in color. Periodically, there are representatives of the breed with eyes of different shades. The nose is medium, the lobe is black or brown, sometimes with pink pigmentation on brown. The ears are medium, set high, and have cartilage. The ears themselves should neither stand nor lie and after the crease, be turned forward.

The Australian Shepherd has a severe scissor bite. The head is connected to the body by a strong, medium-length neck. The body is knocked down, muscular, oval hips, and deep chest. The flat, powerful back is completed by an expanding loin and a slightly sloping croup. The abdomen does not sag. The pet has powerful paws, round in shape. The tail of a shepherd dog can have different lengths. The dog is distinguished by a smooth or wavy coat with a thick undercoat. On the front surface of the paws and head, the dog has a shorter coat. The neck and back of the legs are covered with long, brushed hair.

Possible piebald and white on the chest, neck, and limbs of the dog. Gold, brindle, sable, or graphite Aussies are not officially recognized. 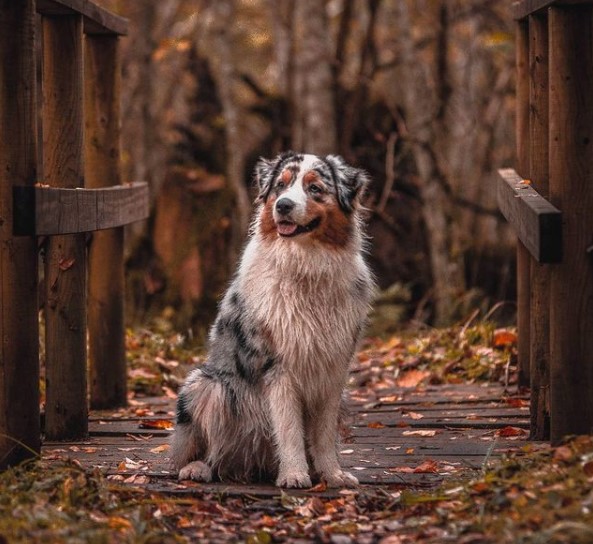 The history of the birth of the breed is very ambiguous. The first ancestors of the Australian Shepherd arrived in America in the nineteenth century. According to one of the legends, these were the dogs of the Basque shepherds. There is also another version of breeding. According to her, the ancestors of the Aussies were a variety of Old German Shepherd Dogs – the Tiger. These are Shepherd dogs with dark gray coats. They were brought from Germany to Australia in the mid-nineteenth century for the purpose of grazing sheep. Later, the dogs were brought to the United States, where breeding began, by crossing with other breeds.

There is a third version of how Australian Shepherds appeared in the United States. According to it, the Pyrenean Shepherd Dog, outwardly similar to the Aussie, was brought to America from Andorra also in the middle of the 19th century. Dogs of this breed were distinguished by excellent herding qualities, therefore they came to the United States during the period of the development of the textile industry and the growth of the sheep population. In addition, the Australian Koolies are also considered the ancestors of the Aussies. They also did a good job of grazing the herd.

Be that as it may, all of these breeds have external similarities, are excellent shepherds, have an extraordinary mind, and are devoted to humans.
Farmers in the United States immediately noted the endurance, hard work, and intelligence of these breeds, therefore, already at the beginning of the twentieth century, targeted breeding of Aussies began. The current pet was obtained as a result of crossing the Pyrenean, Old German Shepherd Dogs, Koolie, Bernese Mountain Dog, and Collie. The first Australian club in America was registered in 1957, and already in 1970, there were 25 clubs. The year of registration of the breed standard is officially 1977. 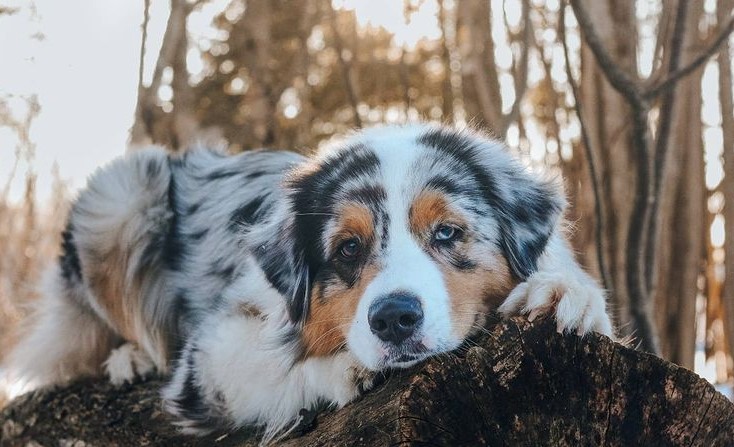 The Australian Shepherd, like any other dog, requires upbringing. If you pay enough attention to a pet, then he shows his active, cheerful disposition, shows love and devotion to everyone who is a member of his family. The Australian Shepherd is not aggressive but treats strangers with caution. At the same time, fear does not demonstrate. Australian Shepherds get along easily with other pets, especially if they grew up together. If the dog is too active in relation to a cat or other dog in the house, then it must be taught to stay with them.

Australian Shepherds are considered to be very loyal animals. They love the company of the owner. In the game, they show high intelligence, obedience, moderately curious. Aggression is shown only in the event of a real threat. The dog learns new commands with pleasure. Since the Aussies were bred for the purpose of grazing livestock on wide pastures, the dog has good physical strength and needs active walks. The owner must provide her with a daily walk with the opportunity to run and play. If a pet spends most of its life in a closed house, then depression may develop. At home, the dog will find activities for itself, so household items may suffer. 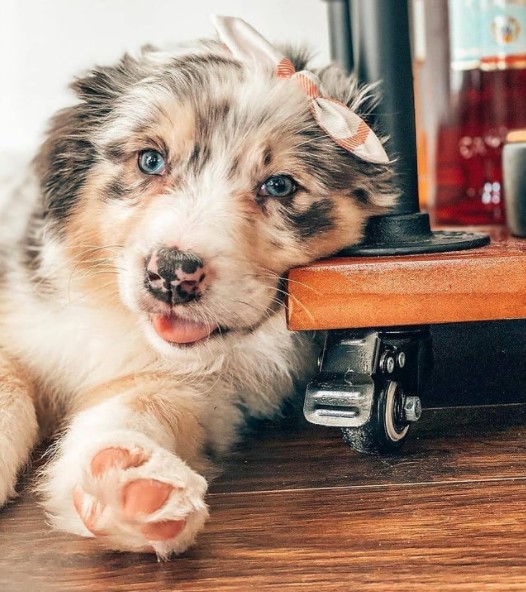 Dogs of this breed adapt well to any conditions, so they can live both in the courtyard of a private house and in an apartment. If the Australian Shepherd lives in the yard, then the chain is not acceptable for her. Consider only the option with a spacious aviary and a warm booth. The Aussie must know where they belong in the apartment. It should be equipped with a special lounger. Eating should also be in a strictly designated place. Australian Shepherds do not like drafts, as well as too warm and dry air. It is necessary to ensure that the apartment has a comfortable temperature for both humans and animals.

Walking in the fresh air with the Australian Shepherd should be at least twice a day. Each walk should be at least an hour, and preferably more. Dogs of this breed have a rather thick coat, so it is more difficult for them to endure the heat. In the summer heat, it is better to walk the dog early in the morning and late in the evening. During the day, you should choose shaded places without direct sunlight.

While walking, the Aussies should be given the opportunity to run and play. The dog will gladly carry a ball, stick, and other toys to the owner. Out-of-town walks are ideal for the Australian Shepherd. Aussies must have access to open areas for running and a pond for swimming. The dog’s coat should be washed after the pond. It is also necessary to monitor the cleanliness of the paws after walking, to monitor the absence of damage to the pads.

A thick coat requires more careful grooming. The Australian dog needs to be bathed periodically (once every 3 months) and brushed 2-3 times a week. During the period when the dog is shedding, the undercoat should be combed out with a special brush daily. If you do not provide good care for the thick coat of the dog, then you can face the appearance of skin infections, fleas, ticks, and the formation of tangles. 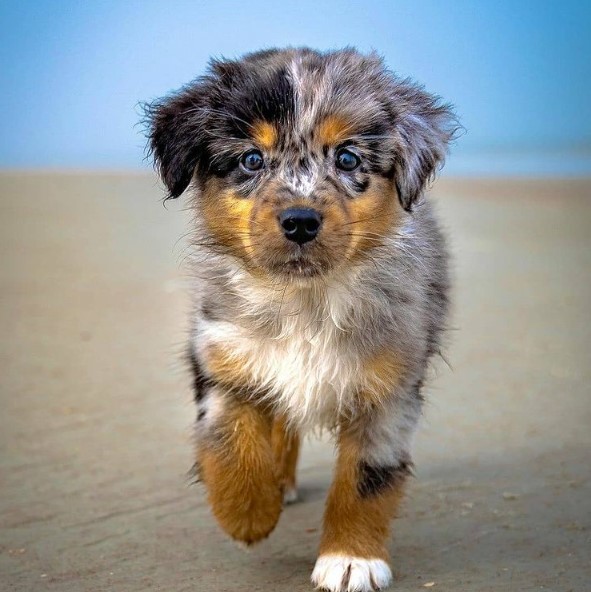 Any manifestation of the disease: indigestion, high or too low temperature, lack of appetite, apathy – should be the reason for contacting the veterinarian. Do not self-medicate. Also, the veterinarian should advise on medications that can be used to treat your pet. And you also need a specialist’s advice about parasite remedies, vaccinations, and other issues.

The most common Aussie diseases are: 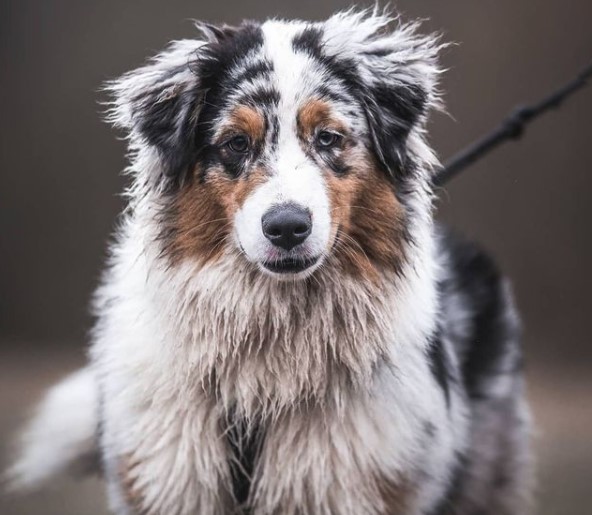 Before you get an Australian Shepherd puppy, you need to check with the breeder the likelihood of hereditary diseases, as well as consult on how to behave correctly when certain symptoms of the disease appear. Aussie is a loyal pet with no signs of aggression, which needs education and active training.