The Beagle is an extremely friendly dog ​​that gets along well with other dogs and does not growl at strangers on walks. The intelligent four-legged friend is therefore only suitable to a limited extent as a guard dog. It will probably strike when strangers approach the house or property, but probably more in the form of barking with joy at the unexpected visitor.

What he can’t stand at all: is being alone. If he is for a longer period of time, he barks a lot and howls. He’s just a very sociable guy who feels most comfortable in a family with children who play a lot with him and go hiking in nature. If possible, he should remain on a leash, since he is a hunting dog and likes to chase interesting smells. His astonishing stamina and energy are also shown here, which make it possible to go on very long hikes with him.

One should not underestimate his own head, which makes him snoop around very purposefully and sometimes also be a bit stubborn. The Beagle is one of those dogs that are not particularly easy to train. At the same time, being quite calm and gentle, he blends in very well around the house, doesn’t drool, and doesn’t smell as strongly as some other dogs. However, his fur causes him to lose a few hairs. And it can also happen that the Beagle loses a few droplets because he quickly rushes inwards with the sheer joy of coming home again.

Since the Beagle also loves to sniff and follow tracks in your own four walls, you should never leave food unattended. Because that ends up in the stomach of the four-legged friend if he likes it. The Beagle feels comfortable wherever he is loved, whether in a house with a garden in the country or in a city apartment.

The Beagle reaches an average size of 33 to 40 centimeters and weighs between 10 and 14 kilograms. Its short, coarse fur usually consists of two or three colors (black, white, and red). Beagle dogs are mainly divided into two size categories: one type is a maximum of 30 to 33 centimeters high (shoulder height), and the other is slightly larger and reaches between 35 and 39 centimeters. The weight is accordingly somewhat higher or lower.

Beagles are gentle, fun, and sweet. A Beagle often makes them laugh, but sometimes makes them cry with their goofy behavior. When you own a Beagle, it’s often busy making sure the dog doesn’t get up to mischief. Treats have proven their worth for training, and the dog will drop almost anything for them.

In general, the Beagle, like almost all dog breeds, is very sociable and should therefore be brought into contact with other people and the environment in general at an early age.

Beagles are popular with young and old alike because of their compact dimensions. Originally, the Beagles are hunting dogs and therefore sometimes a bit stubborn; it, therefore, requires a little patience and forbearance to train them. The fact that they used to be used as hunting dogs can also be seen from their extraordinary noses, which can pick up and follow almost any scent. The Beagle’s nose has over 200 million scent receptors, which is 40 times more than humans have! So the dog can also be nicknamed “nose with legs”. Incidentally, the Beagle is still used today to hunt smaller game such as rabbits, but rarely in this country.

As a rule, the Beagle gets along well with other dogs, but also with other species such as cats. The dogs are very outgoing and welcome new members of the family with great affection. 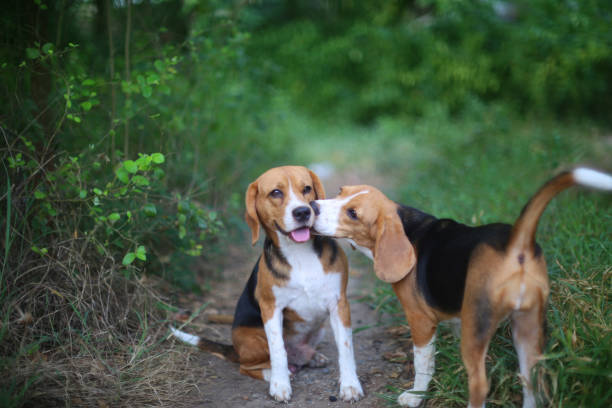 The Beagle is not prone to barking but uses three sounds frequently: a barking sound, a howling sound, and a mixture of the two.

Beagles can be kept well indoors. Because of their size and their rather reserved temperament, you don’t necessarily have to own a house with a large garden. Regular exercise, regardless of the weather, is absolutely necessary. It should be at least one hour a day, otherwise, the beagle will become unhappy and often aggressive.

As mentioned above, one of the Beagle’s most important characteristics is its excellent nose. The dog breed has therefore been used successfully at airports, especially in the USA, for more than 30 years. The breed is excellent for training, for example, to find forbidden foods. In addition, nobody “at work” is frightened by the small size and gentle facial expression… Today, Beagles are used in more than 120 airports around the world. In order for the dog to be able to fulfill this task well, qualified and intensive training is necessary. Various countries have also set high requirements for breeders and strict tests.

The Beagle’s coat is short and easy to brush. However, he loses a lot of hair. If you like it sparkling clean, you have to vacuum it several times a day.