The Bedlington Terrier is a dog with the appearance of a meek lamb and the temperament of a true terrier. Many lovers of the breed are attracted by the outstanding appearance of the dog, thanks to which it cannot go unnoticed. 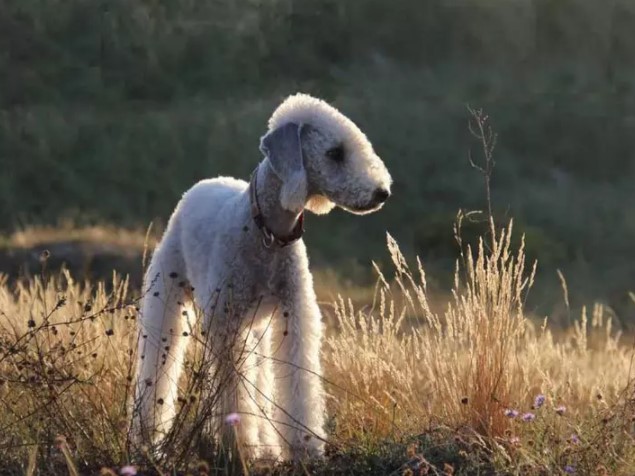 When and how these dogs appeared remains a mystery. It is reliably known that terriers of this type were found in England in the 18th century and were called the Northumberland Fox Terrier (Fox Terrier). The first written records of them belonged to James Ellen, a piper from Northumberland. According to the assumptions of dog handlers, the Greyhound, Whippet, Otterhound took part in the formation of the breed, and the woolen hat on the head speaks of a relationship with the Dandy Dinmont Terriers.

The Bedlingtons were very popular with small shopkeepers, farmers, and miners. Dogs were often accompanied by traveling circuses. The breed is named after the small mining town of Bedlington, in the vicinity of which it was most widespread. It was officially approved in 1825, and in 1867 the first standard was adopted. In 1935, they began to keep a studbook, in which they entered all the English Bedlingtons known at that time. The most prominent Bedlington was Ainsley Piper. She began hunting at just over six months of age and continued to hunt the most ferocious badgers and otters even as she became old and blind.

The Bedlingtons acquired their elegance only in the 20s of the last century, and the original haircut made them look like sheep. These external features are the hallmark of the breed and have played a huge role in the popularization and distribution. 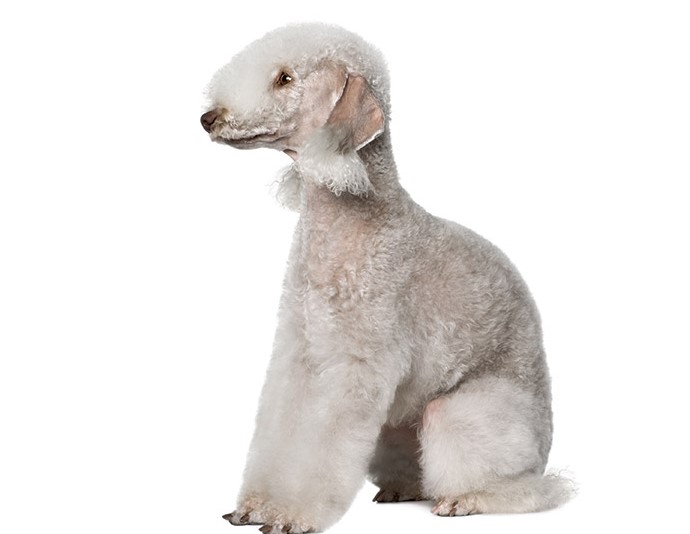 The Bedlington Terrier is a graceful, elegant, flexible dog with no signs of rudeness. Height is about 40 cm, and the weight is 8.5 – 10.5 kg. The external tenderness and fragility of these animals are very deceiving, steel muscles play under the fluffy soft fur, and strong powerful jaws are hidden in the charming sheep’s face. For all its decorative appearance, this is a full-fledged terrier, surprisingly resourceful, strong, and hardy.

The head is elongated, covered with a silky white wool cap. The skull is flat, rounded, the transition to the muzzle is poorly expressed, the line from the tip of the nose to the back of the head is straight, continuous. Jaws long, tapering, scissor bite. The lips fit tightly. The eyes are small, triangular in shape, shiny, set deep. Color – brown, usually light shades. The ears are medium in size, oval, covered with fine velvety hair, with tassels at the tips. They are set low, close to the head.

The neck is long, tapering towards the head. The body is muscular. The topline is arched. The chest is deep, flattened. The bottom line has a pronounced bend. The tail is of medium length and gracefully curved, tapering towards the tip, never rises above the topline. The legs are straight, set slightly wider at the chest than at the level of the metacarpus. The hind legs appear to be longer than the front legs. Feet with well-knit long toes and thick pads.

The coat is very peculiar, atypical for terriers. The hair is silky, thick, and soft. Not adherent to the skin tends to curl into curls, especially on the head. The color is sand, liver, or blue. 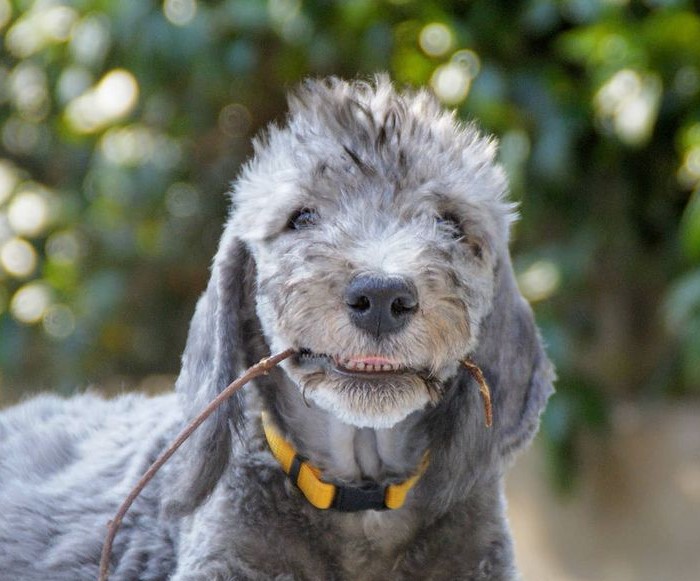 These dogs are very mobile, energetic, and curious, they like to get acquainted with something new. At any time, they are able to go for a walk or travel. The Bedlington Terrier does not tolerate rude or disrespectful treatment. He strives to be on an equal footing with people. He needs an owner who values ​​this partnership and respects the dog’s personality.

You can keep Bedlington for many years, but you never know its essence, which manifests itself in extreme situations. If the owner is in danger, Bedlington is able to show unbridled rage and bulldog grip. He easily jumps to a height of human growth, and resourcefulness and strength make him a serious opponent. However, it is by no means possible to specifically cultivate anger and the qualities of a protector in a dog. The Bedlingtons get along well with children and are very affectionate with the rest of the family. Even to strangers, dogs are usually good-natured. Alertness can be shown only if uninvited guests encroach on their territory or not to the liking of the owner. 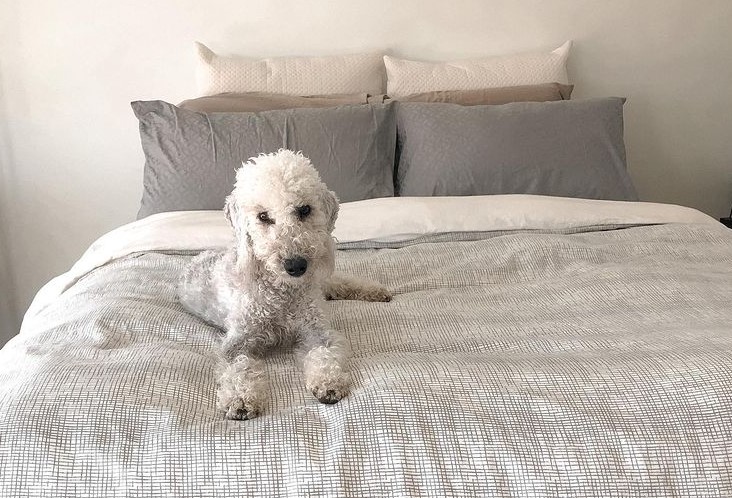 Bedlington is categorically unsuitable for street content. He should live in an apartment or a private house with his own yard, where he can stretch his muscles, dig holes, entertain himself with hunting and guarding the territory. In the house, as a rule, dogs do not create problems – they are clean, do not smell, and shed very little. They behave very intelligently, calmly, without showing unnecessary fussiness, adhere to the established rules. With proper socialization, they get along well with other dogs and cats. Bedlingtons need good physical activity. If the dog lives in an apartment, it is advisable to take walks twice a day for about an hour. It is worth remembering that a neighbor’s cat or squirrel can tempt a gambling hunter into a chase race.

Most Terriers have a coarse coat that is usually trimmed, but in this sense the Bedlington is different. His unusual hairstyle is created with scissors and sleight of hand. The dog is cut once every 1-2 months. This rule applies only to those pets that must keep their show appearance. It is advisable to comb the Bedlington every day. This treatment improves blood circulation, stimulates hair. In addition, grooming your dog includes weekly cleaning of ears, teeth, and clipping of nails as needed every 3-4 weeks. 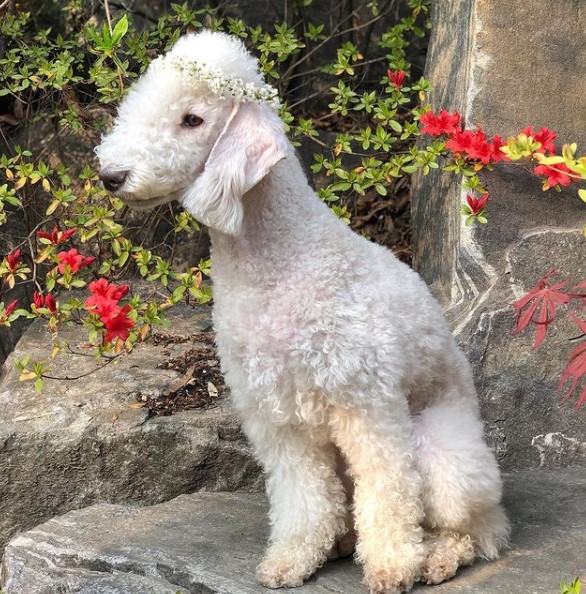 Bedlingtons are very strong and hardy dogs. With proper care and maintenance, they rarely get sick. There are a number of diseases to which dogs of this breed are most susceptible. These are copper toxicosis of the liver and eye diseases: distichiasis, cataracts, progressive retinal atrophy. The Bedlington Terrier is a centenarian. The average life expectancy is 14 years, but some of these dogs have celebrated their 20th anniversary.