This funny Englishman attracts attention, first of all, for his original appearance: many people compare him with a little meek lamb. But in fact, this plush-looking dog is not at all a meek sheep: when the situation demands it, he turns into a gambling and fearless fighter. For such a discrepancy in appearance and character, fans of the Bedlington Terrier called him “the lamb with a lion’s heart.” The ancestors of the Bedlington Terrier include the Whippet, Dandy Dinmont Terrier, Otterhound, Border Terrier, and other breeds, many of which today cannot be “calculated”. The first ancestors of modern Bedlington Terriers were born at the end of the 18th century. At first, this miracle of nature was called the “Rothbury Terrier”, after the city of Rothbury Forest, but the emergence and development of the breed are closely related to the mining town of Bedlington in Northumberland (an area on the border of England and Scotland), so in 1825 the breed was renamed in honor of this town. 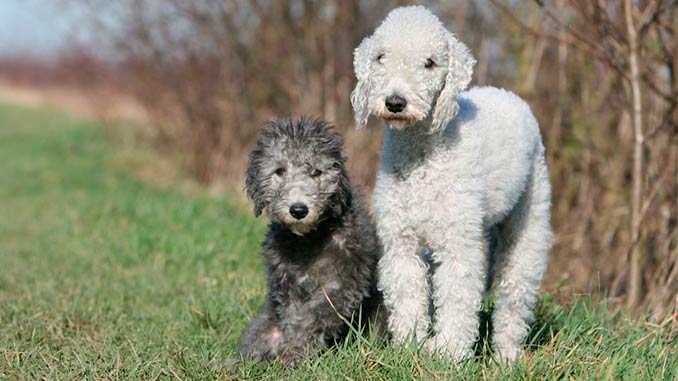 At the same time, the breeding of purebred Bedlington Terriers began. These handsome white guys have an interesting and confusing past. As soon as these agile and energetic “lambs” were used! They caught rats in mines, pulled the badger out of their burrow, hunted wild rabbit, fox, and otter, participated in rat catching competitions and dog fights! They say that there was a case when three Bedlington Terriers managed to drive even a bear and hold it until the hunters arrived! And in rat-baiting competitions, this gambling dog could bite a hundred rats in 10 minutes! Bedlington Terriers were also the favorite dogs of nomadic gypsies: there was a period of time when they were even called “gypsy dogs”. The gypsies taught the dexterous and agile Bedlingtons various cunning tricks, including the skills of pickpocketing dogs. After such a not too aristocratic past, the Bedlington Terrier finally found himself in an atmosphere of luxury and wealth: they say that the English queen herself was conquered by these graceful and affectionate creatures and ordered them to be delivered to her palace. So the Bedlington Terrier from a brawler and a tramp turned into a glamorous gentleman, a favorite of the English nobility. A new stage in the development of the breed began. In 1867, the first breed standard was adopted and the Bedlington Terrier became a regular at competitions and exhibitions. Subsequently, the standard was changed several times as the dog’s exterior improved towards a more sophisticated one. By the way, the character of the doggie has also undergone changes for the better. But not all lovers of the breed appreciated this reincarnation, therefore in the 70s of the XX century, the Club of Working Bedlington Terriers was founded in England, which set as its goal the preservation and improvement of the working qualities of the breed, and not its appearance. For some time, there were several types of Bedlington Terrier in the country, but today the differences between them have practically disappeared. Today the Bedlington Terrier is popular in many European countries mainly as a pet, but in its homeland, it is still used as a hunting dog. The Bedlington Terrier is a graceful, flexible, and muscular dog with an elongated body, deep chest, long neck, narrow pear-shaped head, small, deep-set dark eyes (their shade depends on the color of the coat), triangular ears with rounded tips, and a low-set tail saber-shaped. Height at the withers in Bedlington Terriers is 38-43 cm, weight – 8-10 kg. The harsh (but not coarse) coat of this dog may be straight or slightly wavy. As for the color, the standard allows three options: blue, liverwort, or sand. Now the most popular of them is blue, so the number of dogs of this color is much larger than the rest. Sand color is considered the rarest. With any color variant, tan is allowed. If you plan to show your pet at exhibitions, then you need to carefully monitor his “hair”. By the way, most owners of this breed of dogs cope with grooming on their own. Bedlington Terrier is a real little knight, devotedly loving his masters and ready to protect and protect them, even if the enemy is several times larger and stronger than him. Those who wish to have such an unusual pet should know that this intelligent aristocrat behaves like a true gentleman and cannot stand if he is rudely treated. The Bedlington Terrier is really neat, he is not one of those dogs who love to spank in muddy puddles, and even more so, wallow in them. In addition, this four-legged “lamb” practically does not exude a dog’s smell and does not shed, therefore it is perfect for people with allergies. The Bedlington Terrier is very affectionate towards children and agrees to endure all their pranks and be their “favorite” toy. Surprisingly, even during noisy games, he manages to be quiet: be sure that he will never turn your apartment upside down, even in your absence. Energetic Bedlington Terrier is easy-going and always ready to go with you wherever you go, and if you take him on a trip, he will be just incredibly happy. He is very jumpy and agile, so agility or other dog sports are ideal for him. Movement in the life of a Bedlington Terrier must be present, otherwise, it can turn into a mischievous and lazy “sofa dog”.