Bernese Mountain Dogs are beautiful, harmonious, loyal, and calm dogs that have faithfully served people for many years. Working farm dogs in the past, today Mountain Dogs are more and more often adopted as pets and are considered to be soulful and empathetic family members. It seems that there is not a single feat that this dog could not accomplish for the sake of its owner. Bernese Mountain Dog’s affection for close people does not wane throughout his life. 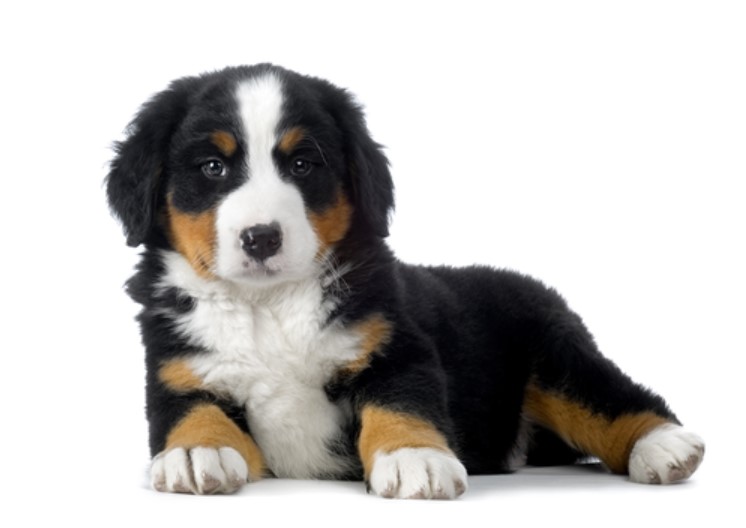 The Bernese Mountain Dog is a long-haired, tricolor, harmoniously built large dog. The head is medium in size, the transition from the forehead to the nose is well pronounced. The nose is dark in color. Pincer bite. The eyes are almond-shaped, dark brown. The ears are medium in size at the tips, rounded, drooping, in an alert state, the back of the auricle rises. The neck is muscular, strong, and of medium length. The back is straight. The chest is deep, reaching to the elbows. The fluffy tail is lowered down, during movement it rises to the level of the back. Legs straight-set parallel. The coat is shiny, long, straight, maybe slightly wavy.

The appearance of dogs of the Bernese Mountain Dog breed is distinguished by its characteristic colors. The color is dominated by black, bright markings should be on the paws, cheeks, eyebrows, and chest, white markings on all paws, throat, chest, and tip of the tail. A desirable white blaze on the nose, which rises between the eyes. 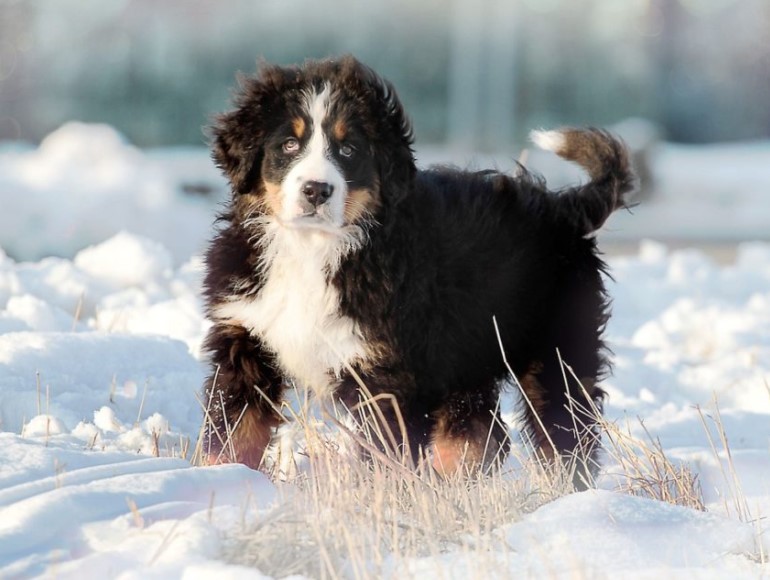 It can be considered that the history of the origin of the Bernese Mountain Dog dates back to the heyday of the Roman Empire. In some chronicles of that era, working dogs are mentioned, which outwardly are very similar to modern representatives of the breed. Their ancestors were supposedly Alpine Shepherd dogs and Roman Molossians, who came to Switzerland after the conquest of the country by the Roman legions.

For a dozen centuries, Swiss peasants and farmers have used the Bernese Mountain Dog as a guard, herding, and traction dog. True, the name “Mountain Dog”, appeared somewhat later. The breed was previously known as the Dyurbahler. For a long time, no one was engaged in the purposeful selection and the formation of stable characteristics of the breed. Such work began only towards the end of the 19th century when breeders selected several remarkable tricolor Shepherd dogs for their own purposes. The breed was first exhibited in 1902, and after 5 years the first breed club was founded.

The original purpose of the Bernese Mountain Dog breed was to help farmers and peasants who used them as a draft, herding, and watchdogs. It is a working breed that is also an excellent family companion. Country of origin – Switzerland. Other names: Bernese Mountain Shepherd Dog or Bernese Sheepdog. 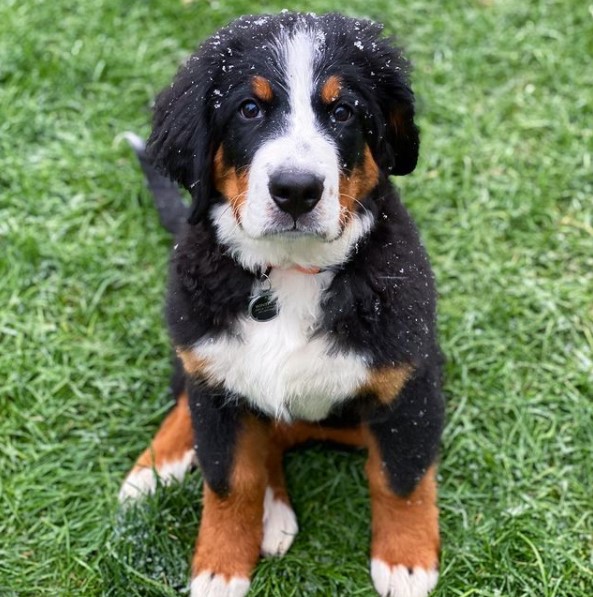 If you describe the character of an animal, then the first trait that needs to be highlighted is loyalty. The meaning of this pet’s life is loyal service to its owner. The dog always and in everything wants to please the owner, needs to be useful to him.

The nature of the Bernese Mountain Dogs is very peaceful and friendly. This allows pets to get along with other animals in the family. But it is better if the acquaintance with other pets occurs in the Mountain Dog from his puppy age.

Due to the inherent instincts of the shepherd, pets, and children in the house, the dog perceives it below itself in the hierarchy. Therefore, the dog tries to control them and not let them out of sight. Since the Bernese Mountain Dog is a very loyal dog, it is also demanding attention. Future owners should clearly understand that this pet will have to devote a lot of time, at least just talking to him and stroking the dog on the back.

Another quality of the Bernese Mountain Dog is laziness. Animals can put a lot of energy into work to please humans only if the activity is short-lived. Most of all, these dogs like to rest near the owner. Therefore, this breed is perfect for inactive owners. And for those who assume that a pet will accompany him on long cycling trips, it is an inevitable disappointment. This is a working dog but does not have a lot of energy and stamina. 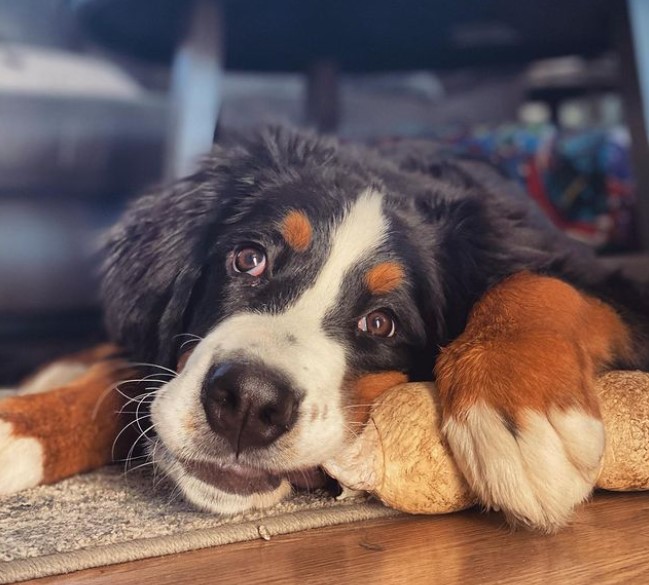 Mountain Dogs shed profusely, leaving behind shreds of fur. The molting period lasts all year round. Therefore, this breed requires regular grooming. When molt is in full swing, the dog is thoroughly combed out every day. With a moderate process, 1-2 times a week will be enough.

Do not be afraid to trim the tangles, otherwise, the pet will be unpleasant and even painful due to the fact that the knocked-down areas of the fur are very pulling on the skin around itself. In addition, the dirt that gets into these places is not washed out in any way. Bathe the dog as it gets dirty, no more than 1 time per month.

The Bernese Dog does not need a lot of physical activity. For a pet, loyalty is important, and the expenditure of energy is already secondary. Good slow walks with short jogging are the best care for the Mountain Dog. So dogs get maximum attention from the owner and feel their need and benefit. These dogs love to play with family members in the house or outdoors. 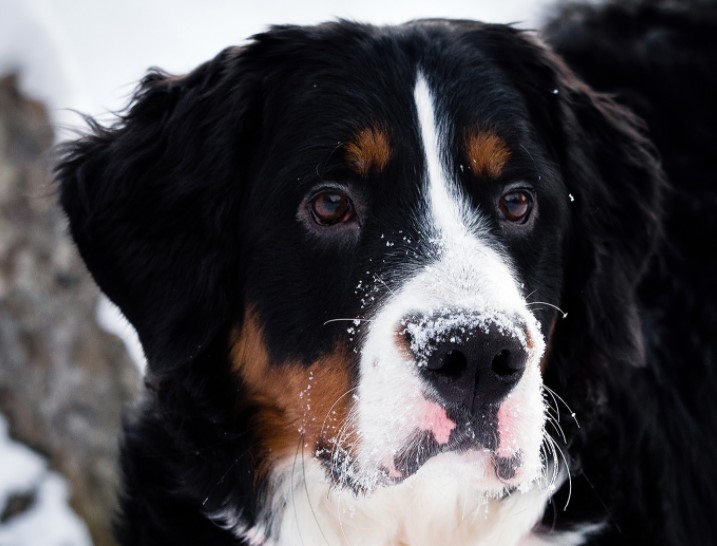 Bernese Dogs can be completely healthy dogs throughout their lives. But still, there are a number of diseases that are specific to them:

The last ailment on the list has significantly reduced the average lifespan of the Bernese Mountain Dog from 12 years to 8. It is very important to periodically show an adult to a veterinarian. At the first stage, it is much easier and safer to remove or heal a neoplasm in the body. 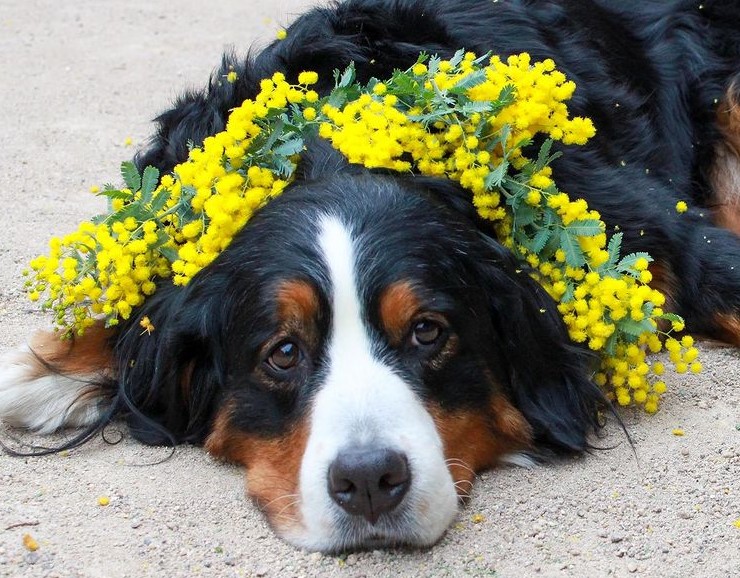 The Bernese Mountain Dog will be a great friend for everyone. He is peaceful and friendly and will get along easily with everyone. This pet will gladly please its owner and will remember only the most frequently sounded commands. Such a dog is suitable for large families and single people. It will take root in any home, anywhere. Daily walks in the fresh air are necessary for the dog, but prolonged physical activity is very exhausting for the dog. Mountain Dogs will be happy to accompany you on walks and short jogging. You should not count on more.