Everyone is used to the fact that the pug should be beige or apricot in color. But there is another color standard in the breed. This is a gorgeous and cute black pug. 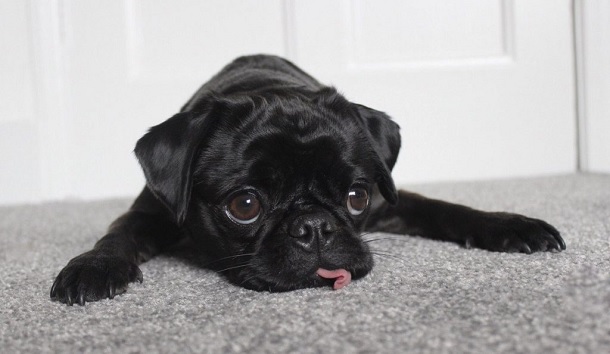 The history of the origin of this dog is the same as that of pugs of other colors. In the historical homeland of the breed, in China, they were considered sacred and they were called “heavenly lions”. This name comes from a legend according to which a lion once fell in love with a squirrel. He loved her so much that he prayed to God and asked him to make their union possible. Then the god took pity and turned him into a pug.

The dark-colored “sky lions” were not as popular as their light-colored counterparts, and most likely the reason for this is the color. The wrinkles on the muzzle are not as clearly distinguished as in individuals of a light color, and for emperors and nobility, it was important that the wrinkles were formed in a certain hieroglyph and were clearly visible.

The appearance of the blackies dates back to the period from 960 to 1279 AD. Be that as it may, these dogs, they were also called “the blackness of the night”, were very revered in China, which could not be said about Europe. There, such a color was discarded and not bred. And this happened almost until the end of the 19th century.

In general, I must say that this color was very lucky because they tried to lime such dogs, considering non-pedigree. And they were almost exhausted, but they liked Lady Brassi, who brought her favorites from China and created a “PR campaign” around them, thereby increasing public interest. She took part in an exhibition at which the dogs immediately received the title of champions.

As a result, the black color gradually gained popularity among amateurs. He began to multiply purposefully, nurseries appeared. Even Queens Victoria and Alexandra had celestial lions.

The sweetest creature has its own character and characteristics. It cannot be said that they differ from dogs of other colors, but it is interesting how the owners characterize their black favorites.

Ideal shade: bluish-black. The skin of the pug has a blue tint, due to which the skin has a bluish undertone. And by the way, because of the black color, this skin must be protected from overheating in the sun. Yes, and there is no need to tire with jogging so that it does not lose its shine. Since the breed is prone to allergies, it will be noticeable on a black coat.

ATTENTION! The black coat of a pet should always be inspected after walking, as ticks are not always visible on it. Yes, and fleas are also not visible, so inspection of the skin of this color is more time-consuming.

If the coat has become dull, then pay attention to this. The black color allows a white spot on the chest. The coat itself is less dense and harsher.

REFERENCE. A black coat fades in the sun, so you need to use a special shampoo when leaving.

Of course, these dogs are friendly, without a shadow of aggression. The dog is a good companion who, despite all his fatigue, will try to be with you. Can enjoy communicating with children and other animals. Although they note that boys can be cocky.

IMPORTANT! If you keep two boys, then skirmishes and fights are possible.

And since the “heavenly lions” really feel like wolfhounds inside and can rush at an opponent, regardless of their size, it is better to walk the males on a leash in order to avoid injury to the precious and sacred coat.

Your black pet will surely make a splash. After all, the rest, the pug is like a pug, but the color is unique and most beautiful. By the way, the cost of such a dog is higher.