The Boston Terrier comes from the USA and is affectionately called “American Gentleman” there. He really is a gentleman, a small, charming companion, and a family dog. He is characterized by a friendly, people-related, and temperamental nature.

All About the Boston Terrier

He loves his people more than anything and often makes them laugh with his gestures and funny facial expressions.

Basically, he is one of the mastiff-like dogs, but over the years he has changed into a family dog ​​that adapts perfectly to the circumstances in his “pack”. Therefore, he can easily be kept in a city apartment if he has enough exercise available. However, a garden in which he can romp around exuberantly is ideal for him. Keeping a kennel is out of the question for the affectionate, loyal philanthropist. 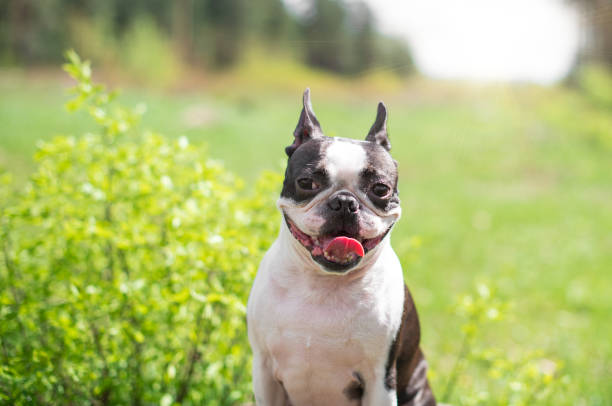 Long walks and sporting activities in the dog club are just the right activity for the lively boy. But if it has to be, he is also satisfied with shorter walks.

The cheerful Boston Terrier loves children more than anything and is a great playmate who plays with balls for hours with plenty of energy and doesn’t get tired when catching or hiding.

Its appearance is somewhat reminiscent of the French bulldog, with the Boston terrier being slightly larger. Its size is about 43 cm, its weight is divided into three classes. The light terriers reach a weight of up to 6.5 kg, the medium-heavy representatives up to 9 kg, and the powerfully built specimens weigh up to 11 kg.

Since the Boston Terrier, like the Bully, has a flat nose and cannot regulate its body temperature by panting, it does not tolerate the summer heat very well. Overexertion and staying in the blazing sun should be avoided in warm weather, as heat stroke can occur very quickly. On such days, the Boston Terrier prefers to lie in a shady spot and doze off. In winter or in cool rainy weather, the Boston Terrier can cool down quickly because it lacks a warm undercoat. A lined or waterproof coat can help here.

Breed Characteristics of the Boston Terrier

The Boston Terrier has a wiry, harmonious body. The head and body are reminiscent of the French bulldog, but its posture is more elegant, and the overall appearance is slimmer than that of the bully, despite its good musculature.

The short muzzle with the large nostrils gives the Boston Terrier’s head its characteristic, slightly square shape. Nevertheless, the transition from the forehead to the bridge of the nose (the stop) is clearly visible. The round, dark eyes are set relatively far apart and convey an intelligent and always interesting impression. The Boston Terrier has a white marking between its eyes. This varies in width and can extend over the muzzle, the neck, and the chest to the front legs. The Boston Terrier always carries the large, pointed ears upright. In Germany, unlike in America, cropping the ears is not allowed.

The Boston Terrier’s body appears square. A broad, low-slung chest gives it an impressive appearance. The back is rather short and slopes slightly over the croup. The Boston Terrier wears its short tail straight or curled under the back line. The front and hind legs are well-muscled and allow the terrier to walk rhythmically.

His fur is short, smooth, and shiny, the warming undercoat is missing. The colors vary between black and white, brown and white, brindle and white, as well as a seal with white markings. The Boston Terrier’s muzzle is usually white, with a regular white blaze running down the neck, chest, and forelegs.

Nature and Behavior of the Boston Terrier 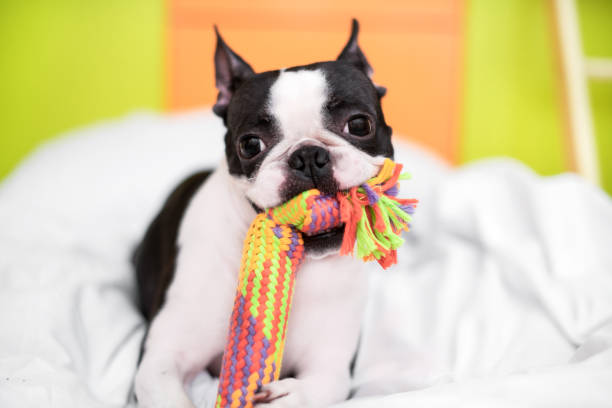 Although the Boston Terrier was once kept as a fighting dog, its behavior today shows absolutely no aggression. Rather, he is characterized by friendliness, reliability, loyalty, and his love for people. He is extremely affectionate with children and is a good playmate who is full of energy and never tires of playing.

However, you should always make sure that the little terrier is not overwhelmed. Its flat nose makes breathing difficult and the dog finds it difficult to balance its body temperature. Therefore, small breaks should always be built in between the game phases.

The Boston Terrier’s high level of intelligence, quick comprehension, and willingness to learn to make training easier. However, you have to calmly and consistently make it clear to the puppy who is the master of the house, because the Boston Terrier can sometimes react stubbornly. Nevertheless, even “dog beginners” get along well with the charming fellow.

The Boston Terrier has an extraordinary temperament and accordingly a high need for exercise. Long walks, romping in the meadow, or dog sports offer a good opportunity to exercise the agile terrier physically and mentally. A sporty, active family is the best way to do justice to his exuberant joie de vivre. People who are not that physically fit can be overwhelmed with owning a Boston Terrier.

The small bundle of energy is ideal for various dog sports. With agility or dog dancing, exercises have trained that challenge the mind and body. Here the Boston Terrier convinces with his zeal, his will to learn, and his quick comprehension.