Brittany Spaniel is a breed of hunting dogs, bred in the 18th century in France by crossing a Pointer and an English Setter. The breed was officially approved in 1905. Dogs of this breed quickly became the favorites of the French for their high intelligence and endurance, and therefore entrusted them with a variety of jobs, including guarding their home. 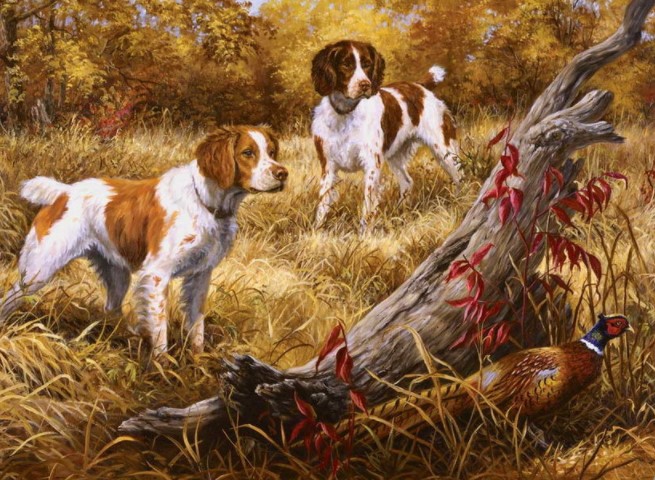 The birthplace of the breed is the province of Brittany, France. Currently, Brittany Spaniel is in first place in terms of the number of French sporting dog breeds. Probably one of the oldest Spaniel dogs, which was improved at the beginning of the 20th century through a variety of crosses and breeding.

The first mention of the Brittany Spaniel dog can be found in the book “Memories of a Hunt in Brittany” by the English preacher Reverend Davis, who was a great lover of hunting. In 1850 he preached in Brittany. Davis described hunting with small “playful” dogs in his book Memoirs of a Hunt in Brittany. Around the same time, the modern Brittany Spaniel, according to unconfirmed reports, was bred by crossing with English Setters.

French hunters often used dogs to hunt burrowing animals. The breed standard was developed in Nantes in 1907 and adopted at the first General Assembly in Ludeac on June 7, 1908. This was the first club standard of the short-tailed Brittany Spaniels. Nowadays, they do not lose their popularity both at home and abroad. 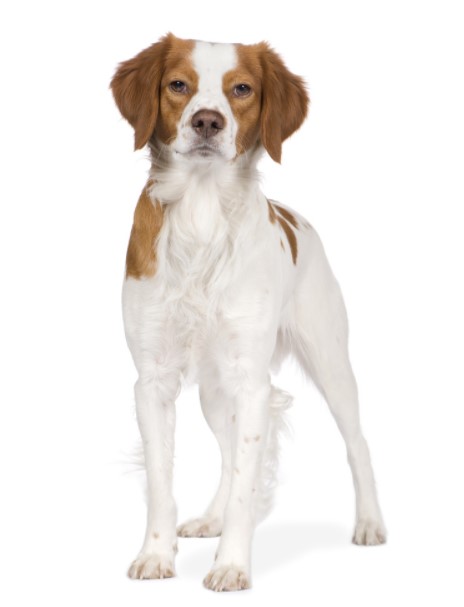 Brittany Spaniel is a relatively small dog, the silhouette fits perfectly into the square, but at the same time, it is very harmonious with smooth lines. The constitution is strong.

The head is proportional, prominent, dry. The skull is slightly rounded. The muzzle is straight, the lateral surfaces are almost parallel. The lobe is large, the color corresponds to the color. Jaws strong, scissor bite. The lips are well defined, not very large, relatively thin, tightly compressed, in some places the lower lip is covered by the upper lip. The eyes are slanted with a soft, frank, and intelligent expression, oval, iris-colored. The ears are set high, drooping, triangular in shape, mobile. The neck is tapered, of medium length, without dewlap.

The body is square, sturdy yet well balanced, and elegant. The back is straight. The loin is broad and short. The croup is straight, strong, flowing smoothly into the tail. The tail is short, set high, drooping, or extended horizontally. The limbs are well balanced with flexible and strong joints. The feet are round, well tucked together.

The skin is thin, well pigmented. The coat is thin, close to the body, slightly wavy. On the front of the limbs, the head is short, on the back of the limbs there is feathering. No undercoat. Colors: 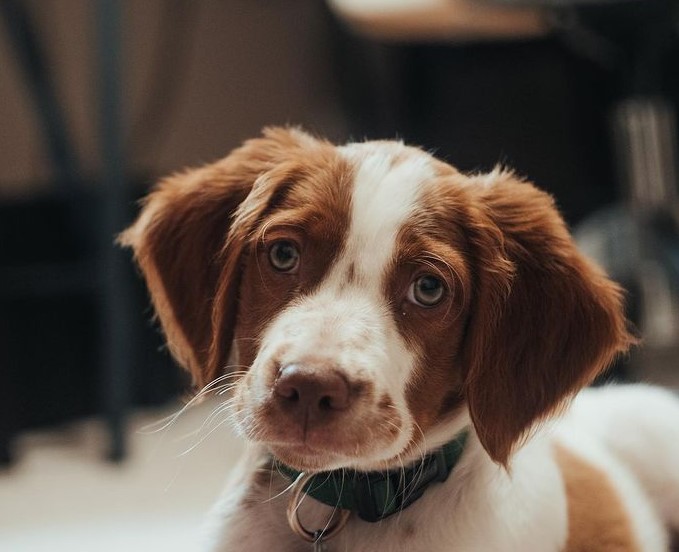 Brittany Spaniel has a well-balanced, friendly personality, strong hunting habits, and good learning ability. He is strongly attached to the owner and other family members, outgoing and flexible. Brittany is a cheerful and intelligent dog that skillfully takes advantage of the owner’s weaknesses and never ceases to amaze with its resourcefulness. No owner has ever complained that his dog is stupid. Brittany has a pretty strong, firm disposition. The dog can be stubborn.

Brittany Spaniel is a true companion, he greatly appreciates the company of people, will participate in children’s games and share any hobby of the owner, but his main passion will always be hunting. Needs an owner who will take the time to communicate with the dog on a daily basis. Calmly tolerates moderate loneliness. Get along well with other pets if well socialized.

Brittany Spaniel already in 6-7 months, he can show good results in tests and get the first working diplomas. Training should be started very early. At a young age, it is important to resolutely, but without rudeness, suppress any attempts to disobey. In the character of the dog, there is independence. With a competent upbringing, Brittany is very obedient and owner-oriented but obeys only if she wants, and throughout her life she will periodically check who is the owner. 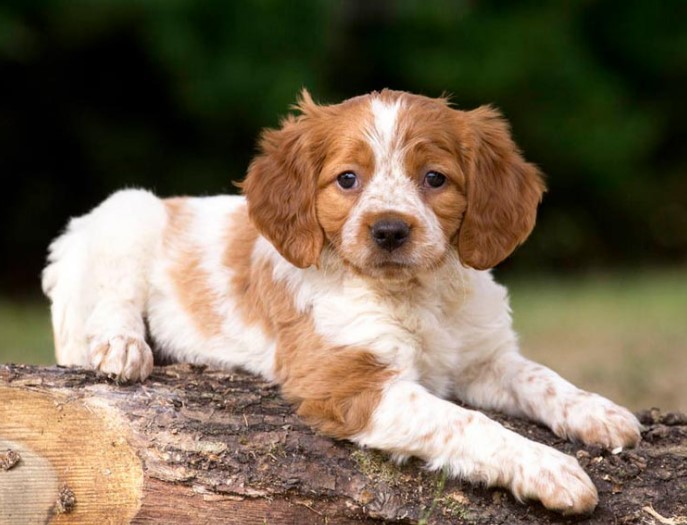 The Brittany Spaniel can work in almost any climate, however, it cannot live in an aviary year-round. The dog has no undercoat that could protect him from severe frosts. In addition, the dog needs close contact with humans. The whole meaning of her life comes down to satisfying the desires of the owner, close contact with him, and joint hunting. Brittany wool sheds moderately in the off-season, the rest of the time is weak, even when wet, it practically does not smell.

The Brittany Spaniel is a smart and quick-witted dog that can easily adapt to live in the city if it gets enough exercise. It includes long daily walks with regular field trips. At the same time, Brittany values ​​comfort very much and will be happy to sleep on the owner’s chair in his free time from walks. If the dog lives in the yard, from time to time it can bring various surprises, such as a neighbor’s cat or mouse, or it can run away from the yard, carried away by the smell.

The dog’s coat is devoid of undercoat, so it requires minimal grooming. Care is reduced to standard procedures: 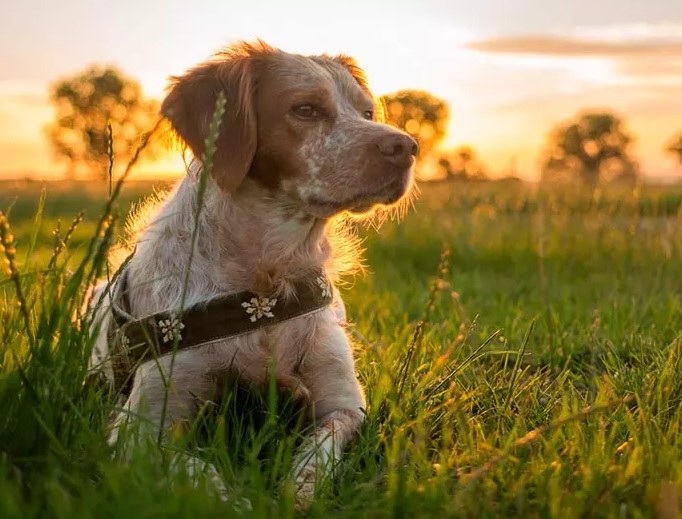 The Brittany Spaniel is generally a healthy, hardy dog ​​that can work for up to 11-12 years. Every fifth dog dies of old age at the age of 14-15 years. The list of inherited diseases specific to the breed includes:

Working dogs are often injured of various kinds. In old age, the development of any senile ailments, including neoplasms, is possible.