The Coton de Tulear is a small decorative breed of dog with soft hair and a docile kind disposition. Other names for the breed: Madagascar Bichon, Tulear Puff, Cotton Bichon. 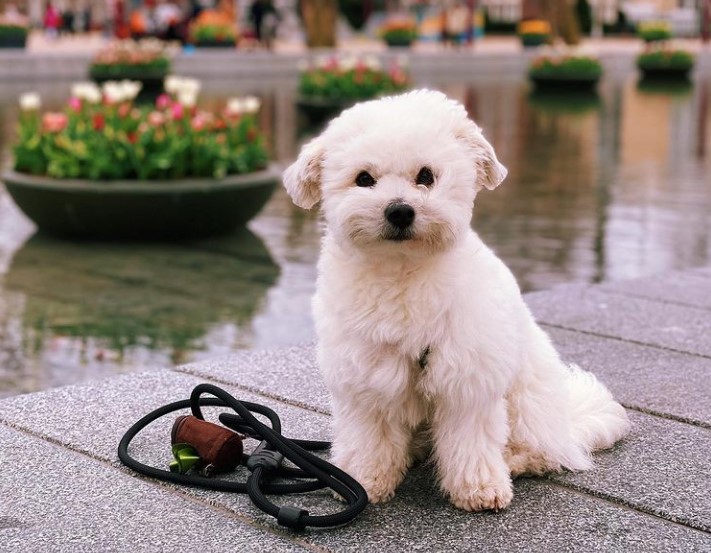 There are many gaps in the history of the breed, but if we take into account only reliable information, then a very clear picture is obtained. Coton de Tulear is a member of the Bichon group. They are direct descendants of the Barbet along with Poodles and Briards. One of the oldest Bichons is the Tenerife Shorthaired Bichon. Once he was brought to the Canary Islands, and then gave rise to most modern Lapdogs (Bichons): Maltese, Bichon Frise, Havanese, etc.

There is a legend in Madagascar that once a few brave little dogs decided to swim across the river, but hordes of crocodiles were afraid. They began to bark loudly, attracting the attention of predators, and then quickly ran further along the bank and swam across the stream in a safe place. At home, Cotons are considered the most cunning and intelligent of small dogs.

Apparently, the Coton de Tulear descended from the Maltese Lapdogs, which came to the port of Tulear in Madagascar on French ships around the 17th century. There is also a beautiful legend about this. If you believe the legend, the French ships were wrecked not far from the coast, but many small dogs managed to escape, some with the owner, and some by swimming. Later, there was mixing with local dogs. The result was excellent livestock of Miniature Bichons, which possessed stamina, excellent health, and high intelligence. Later, the Coton de Tulear became a very popular breed among the nobility and acquired the nickname the Royal Dog of Madagascar. In addition, he was awarded the status of the national breed of Africa. The breeding was carried out under the control of representatives of the royal family.

In the middle of the twentieth century, difficult times came for the breed, as well as for the French nobility in Madagascar. Cotons were on the verge of extinction. Only the return to France of “colonists” with a significant number of small dogs helped them to survive the difficult period. Already in 1972, the breed was officially recognized by the International Cynological Federation. Madagascar is considered the birthplace of Cotons, but the breed is under the patronage of France. 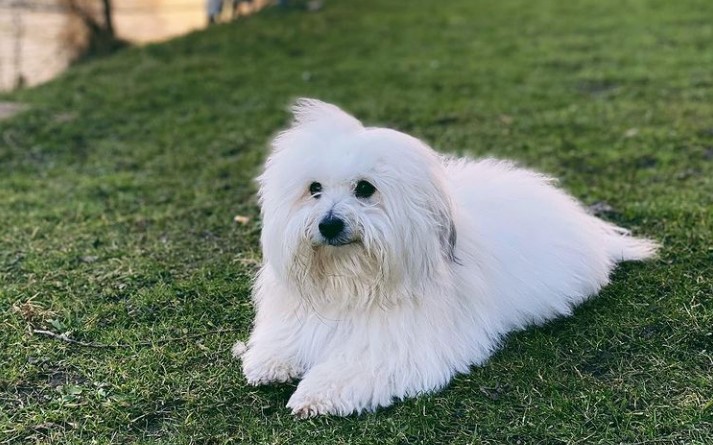 The head is short when viewed from above, triangular in shape. The skull is slightly rounded, wide. Cheekbones are well developed. The stop is moderate. The muzzle is straight. The nose is black, but brown is also allowed. The lips are thin, the same color as the nose. The eyes are round, set wide apart. The eyelids are well pigmented to match the lobe. The iris is as dark as possible. The ears are triangular, drooping, set high, close to the cheekbones, very thin at the tips, reaching the corner of the lips in length. The hair on the ears is long, it may be slightly darker than the main color. Scissor bite, straight or reverse scissors. The absence of the first premolar and third molar is allowed.

The neck is slightly curved, the length of the body is 1: 5. The topline is slightly arched. The withers are poorly expressed. The back is arched. The croup is oblique. The chest is well developed, drooping to the elbows, long with curved ribs. The abdomen is moderately tucked up. The tail is set low, reaching the hock, the tip curved upward. The Fore and hind legs are vertical. Paws are small, rounded, well-knit toes, dark-colored pads. The movement is free, light. The topline stays strong as you run.

The cotton coat is one of the main features of the breed. It is pliable, very soft, resembles cotton in texture, abundant, maybe slightly wavy. The main color is white, black, fawn, two- or three-colored are also allowed. 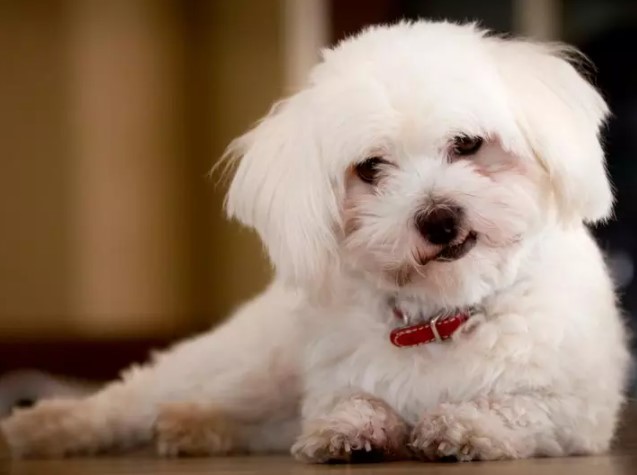 Coton de Tulear is a playful, lively, intelligent, and quick-witted companion, which is equally well suited for single people of any age, as well as for families with children. He adapts well to any lifestyle. Affectionate, friendly, and very loyal. Coton has a well-developed intuition, and his tolerance, playfulness, and cheerful disposition make him a wonderful friend for a child.

The Coton de Tulear was bred for the sole purpose of being an affectionate, playful, empathetic, and friendly companion.

The main happiness for a Coton is when people pay attention to him. Being a full-fledged member of the family, he always remains cheerful and active, it seems impossible to upset him with something. The Coton de Tulear is very sympathetic and, despite its toy-like appearance, is cunning, resourceful, and adventurous. I am ready to support any undertaking, whether it be an ordinary walk near the house or a long hike. His behavior can be watched endlessly. Coton de Tulear will cheer everyone up and bring a smile. 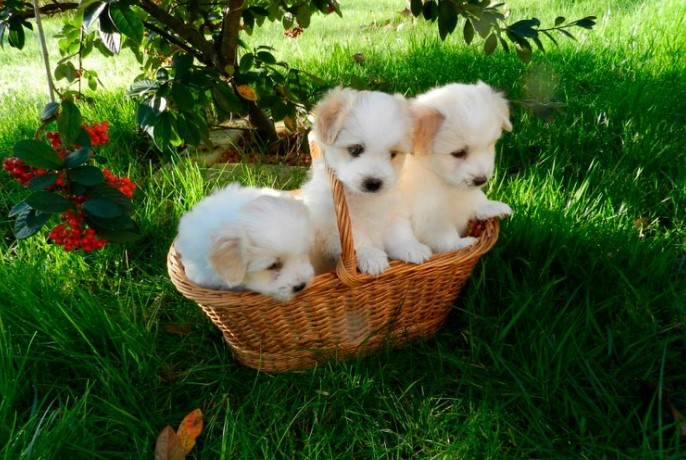 The Coton de Tulear puppy requires practically no maintenance, but the owners should not indulge in the illusion that everything will remain the same in the future. In addition, it is important to teach the baby from an early age to care for the coat.

It is advisable to comb the Coton fur daily. They bathe once every 2-3 weeks. It is very important to check the dog for tangles before bathing. After bathing, they will tighten so much that you have to cut them off. For washing, use shampoos for soft white wool and a conditioner that makes it easier to comb. It is important to dry the wool well or let it dry naturally, avoiding hypothermia and drafts at this time. After bathing, the ears are examined and cleaned. The eyes are rubbed daily or twice a day. It is customary to rinse the muzzle after eating. The wool is self-cleaning, it remains white even after walking, but not in rainy weather. The nails are trimmed as needed, usually every 3-4 weeks. 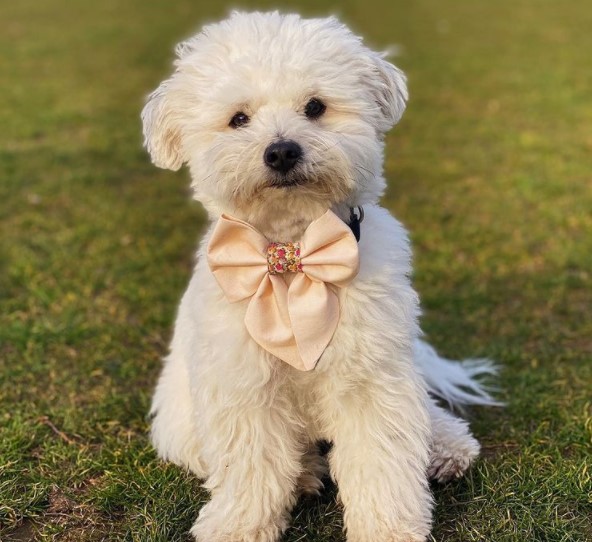 Based on the information provided by members of the English Coton de Tulear Club, the breed health coordinators concluded that the dogs did not have any significant pathologies or serious hereditary diseases. The Coton de Tulear remains the healthy and resilient dog it was before. The American Kennel Club notes that in their lines there are: diseases of the intervertebral discs, rhinopathy, allergies.

Cotons are advised to undergo an annual check-up. Some dogs have elevated liver and kidney enzymes, which are corrected by a low protein diet. With good care, good nutrition, and the necessary veterinary preventive measures, Cotons live for 13 or more years.