The Mustang is a wild horse that used to be domesticated. There are many legends and stories about this breed. Unfortunately, today the population of the Mustang is declining. 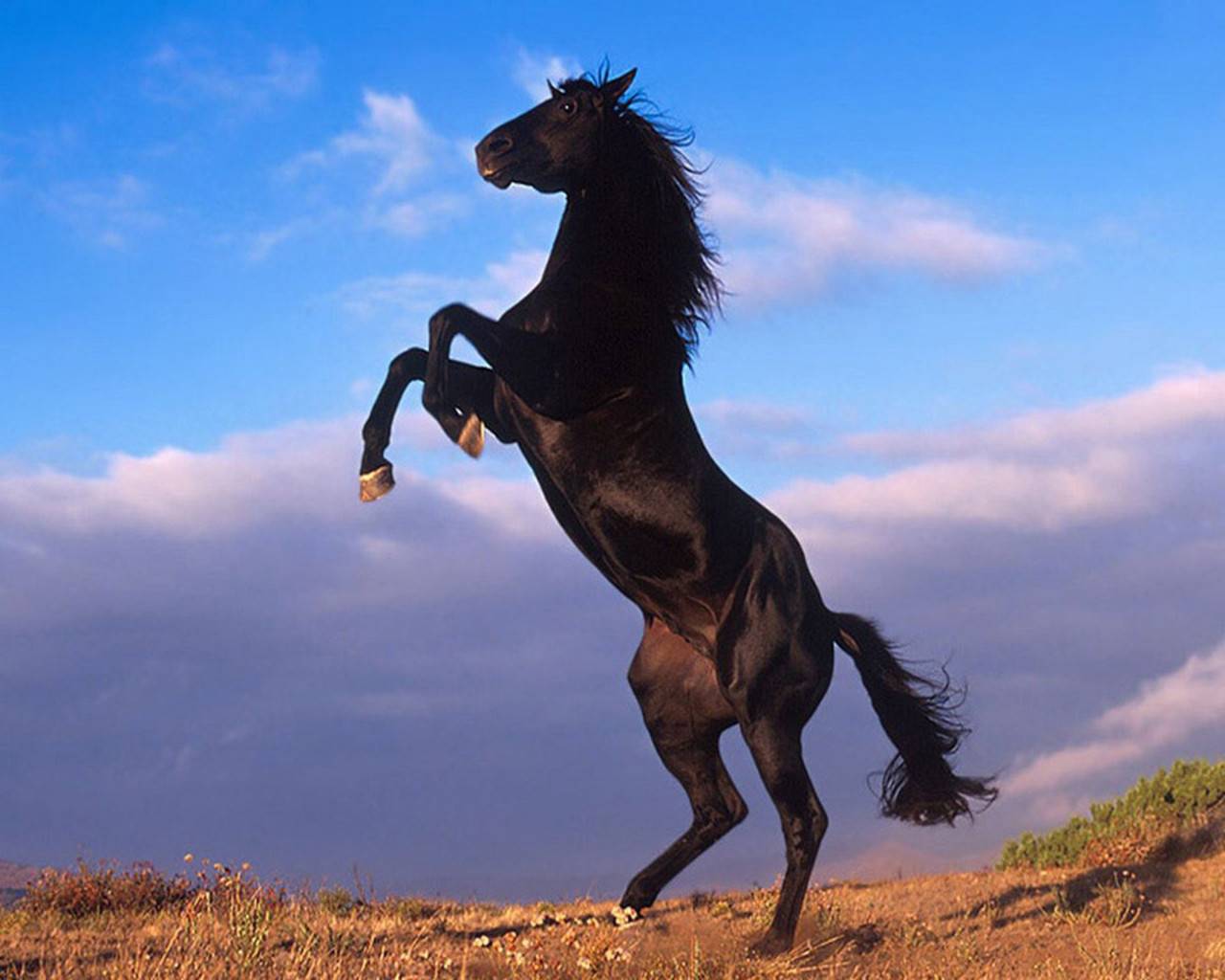 The Mustang reaches 150 centimeters at the withers and weighs about 400 kilograms. Because of the great interbreeding, the Mustangs can be of any color: reddish-brown, bay, brown, or black. The Mustang’s average lifespan is about 30 years. The Mustangs are distinguished from other horse breeds by their short build and strong legs. The Mustang is a clean animal with clean skin and a long and shiny mane. 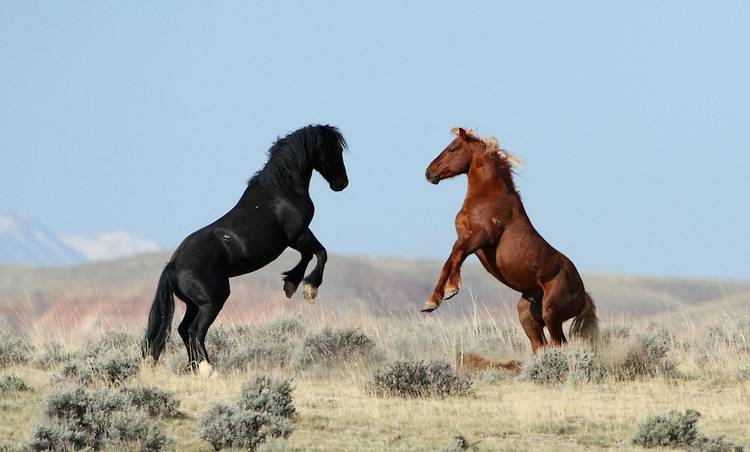 Where did the Mustangs Come From?

The ancestors of the Mustangs are the feral horses of the Spanish conquerors. They were brought in the sixteenth century to North and South America by the colonists. The horses that were lame or no longer useful were released into the wild. Some horses escaped from the pastures or were left to the merсу of fate.

At first, the Indians used the found Mustangs only for food but later they learned to ride them, and the horses became more than food for them. These people believed that if this horse had a spot on its chest and head, it meant that the animal was sacred and would bring victory in a battle. Such horses of the Indians became mascots for them. 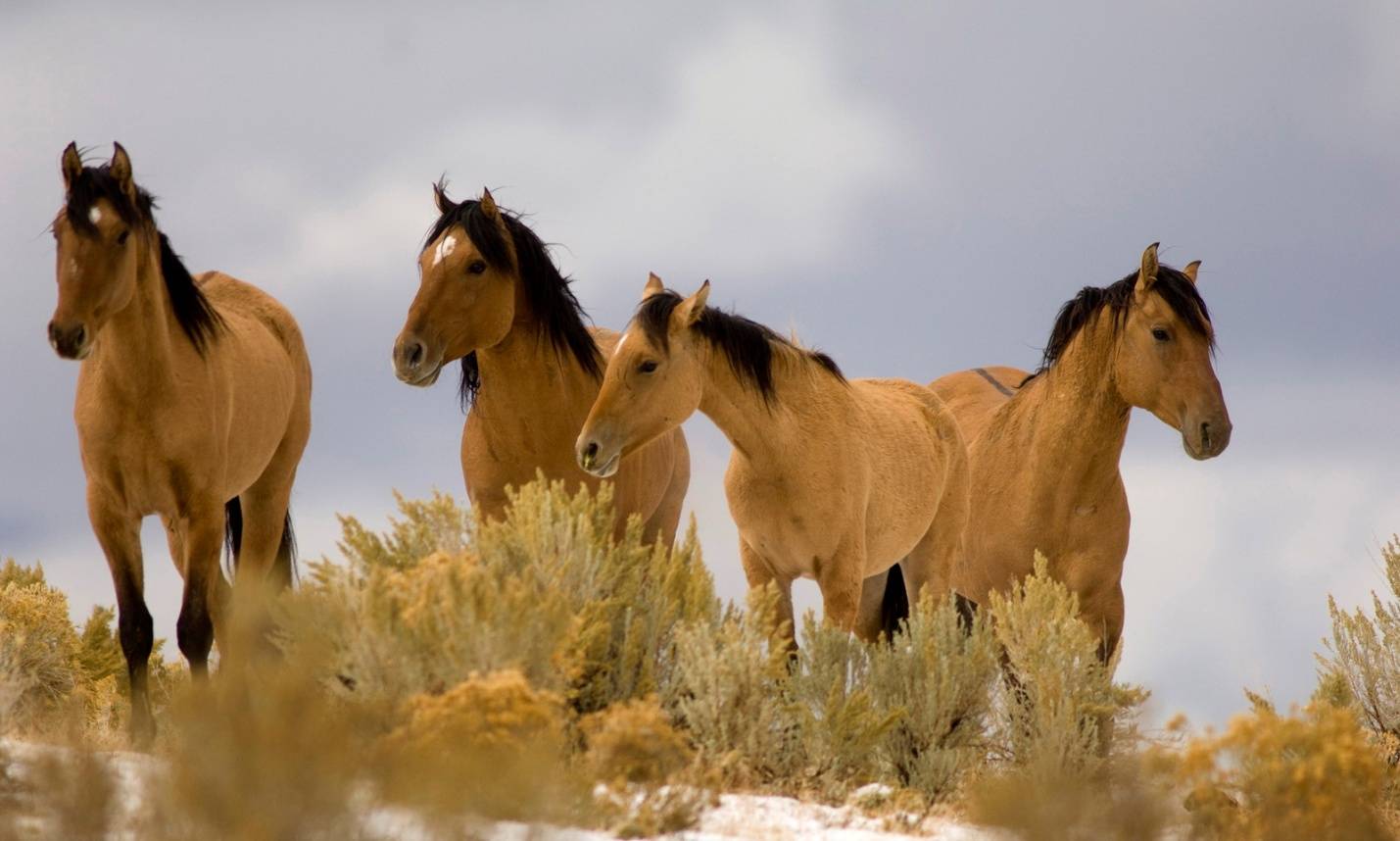 The Mustang Life in the Wild

The Mustangs gather in herds in the wild; they do not live alone. A horse without a herd is completely defenseless against predators. The herds choose their own terrain and graze on it. They can be neighbors with another herd, and in case of danger, they may even unite with it. A herd consists of a stallion and his harem which may number from 2 to 18 horses. The herd also includes young horses and small foals. The herd has a guide mare and a lead stallion. The wild mare leads the herd to safety if a dangerous situation arises, and the stallion bravely defends himself preventing enemies from following the herd. When attacked by predators, the Mustangs form a ring inside of which they place their foals and fight off wolves, coyotes, or other predators with their hooves. They warn each other with a loud snort and communicate with neighing. 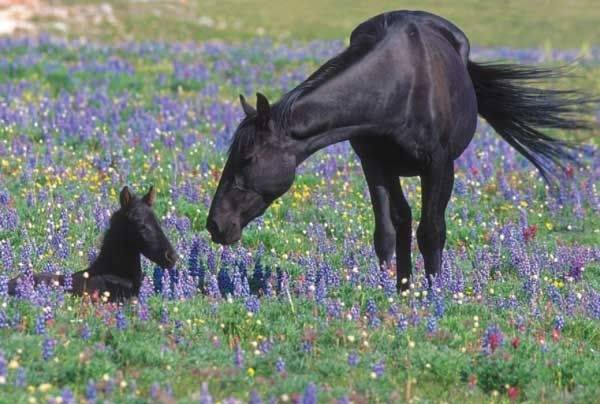 Where do the Mustangs Inhabit?

The Mustangs inhabit the steppes of South America and some of the prairies of North America. But the number of these animals is very reduced, they are almost exterminated. The Mustangs are still used today by the Indians as a means of transportation. Because of their great endurance, the Mustangs are able to travel long distances. 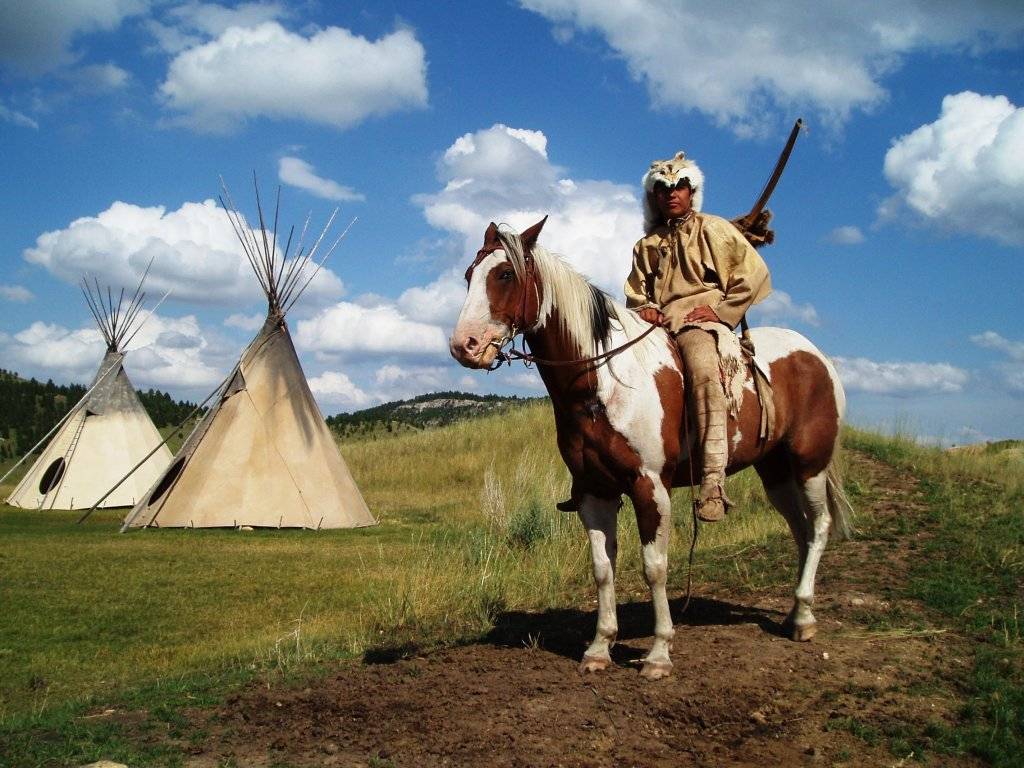 What does the Mustang Eat?

The Mustang is a herbivore animal and eats grass. These horses eat grass and the leaves of small shrubs in nature. As much of America is sparsely vegetated, the wild horses must walk hundreds of miles in search of food. The mustang drinks about 60 liters of water in summer, but in winter, the need is reduced to 30 liters. 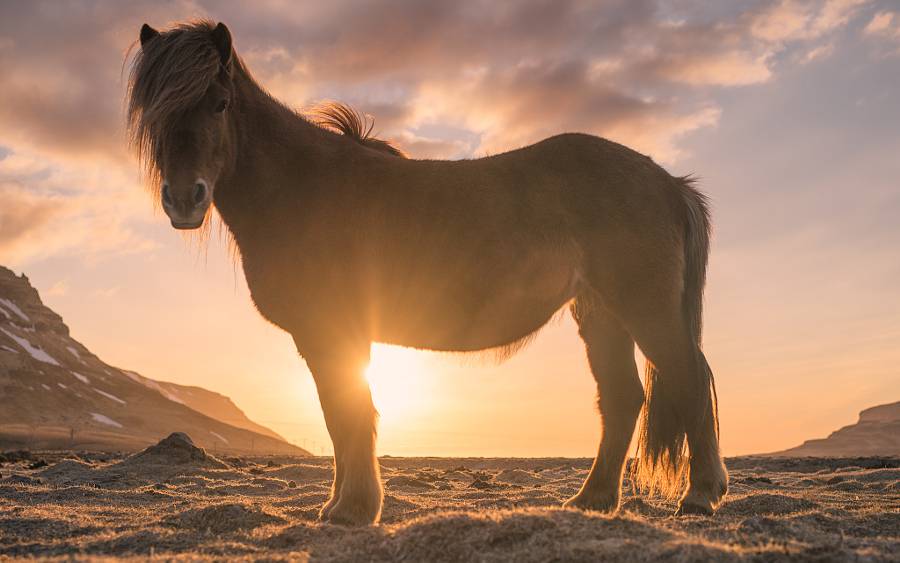 The rutting period for the Mustangs begins from April to July. The Mustangs have one foal, sometimes two after 11 months. Their babies are born in spring so that they are full of energy by winter. The Mustang foals feed on milk until they are seven months old and then switch to plant feed. The mare does not give birth in the herd; she goes to a quiet and secluded place. The foal can walk and even run in just a couple of hours after its birth, and it returns to the herd with its mother in a couple of days. Young stallions are left in the herd until they are three years old at most and then exiled. A wild stallion can lead a harem of mares in only 6 years after birth. Some stallions retake them from older stallions, and some create a new harem. 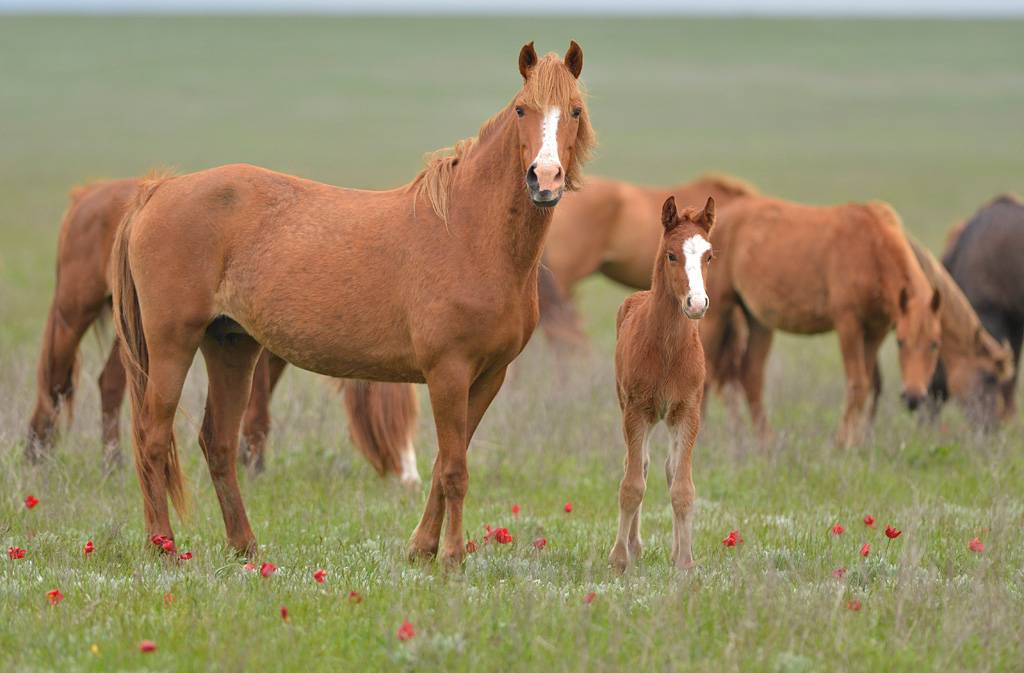 During World War I, large numbers of wild horses were killed and many Mustangs were exterminated for their pelt and meat. Despite the 1971 ban on their destruction and persecution, cattlemen and farmers continue to kill the Mustangs. Many of these horses have been domesticated and farmed. Due to their endurance and unpretentiousness, the Mustangs are used in equestrian sports. The Mustang horse breed can walk long distances without discomfort, qualities that are important to the sport. 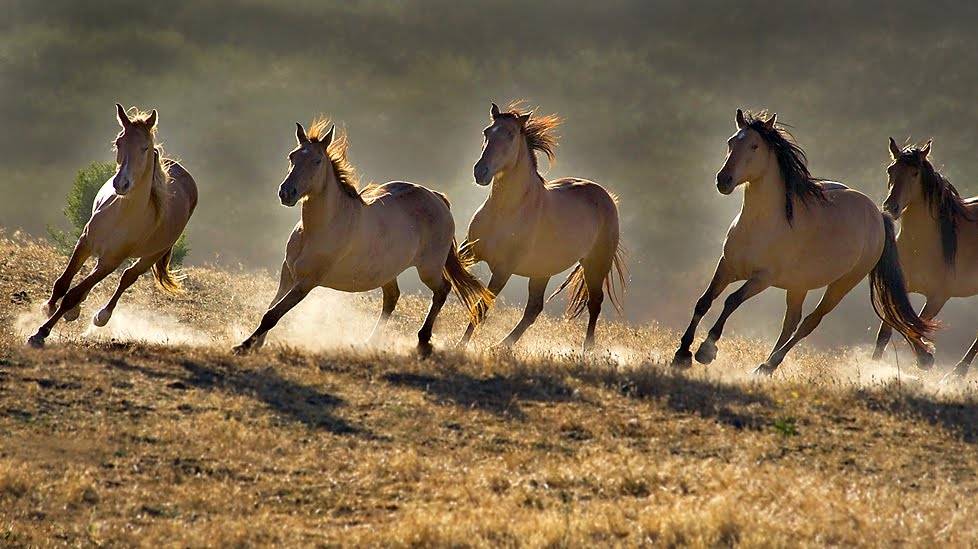 Interesting facts About the Mustang