“Like a cat with a dog” is perhaps one of the most famous phrases that describe the relationship of antagonistic animals, and it does not mean anything good. Alas, for owners of dogs, especially large breeds, this causes real problems: when seeing a cat on a walk, the pet suddenly becomes uncontrollable, does not respond to commands and, in general, tries to get to the cat with all its might. How can you help your pet stop responding to cats?

It should be said right away that weaning a dog from reacting to cats means going against its nature. Only being housemates can animals get along, however, and this sometimes gives a lot of headaches to the owner.

Contents hide
1 Can Cats and Dogs Be Friends?
2 How to Train a Dog?

Can Cats and Dogs Be Friends? 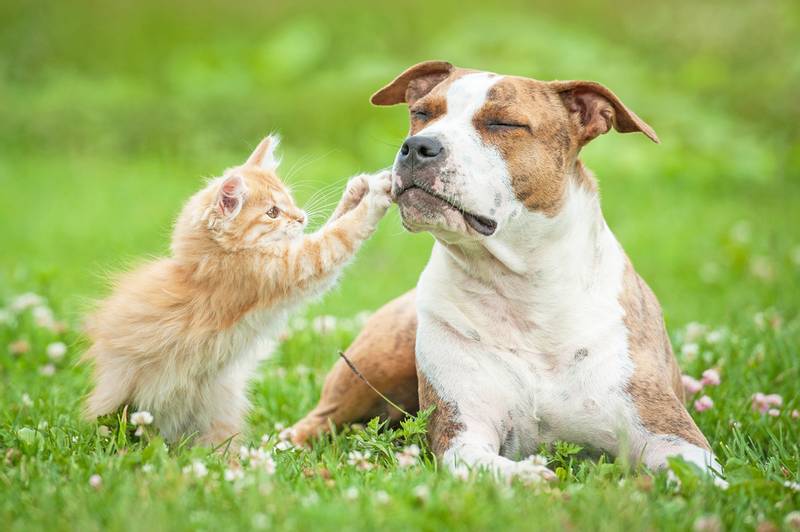 The key difference between a dog and a cat is the manner of communication. Dogs are sociable, social and herd animals, at the genetic level they have a desire to get to know other animals. Cats, on the other hand, are loners by nature, they are rather closed and uncommunicative. Therefore, the cat not only does not understand the curiosity of the dog but also aggressively perceives it – as interference and encroachment on his personal territory and rights.

There is another logical explanation: both cats and dogs are hunters. But the dogs are larger in size, so cats are prey for them. This is especially true of terriers, their hunting instinct is more developed than that of representatives of other breeds. This means that they perceive cats as a potential victim.

There is another theory – about the genetic memory of dogs and cats. According to her, the distant ancestors of domestic animals were clear competitors and fought for their prey. This feud, scientists believe, remained in the blood of pets, despite the fact that today pets do not have to fight for a bowl of food.

How to Train a Dog?

When raising a puppy, maximum attention should be paid to its socialization. The more different types of animals he learns, the more calmly he will perceive them, becoming an adult.

Monitor your dog’s behavior. Sometimes an aggressive attitude towards cats is the result of an unsuccessful acquaintance with representatives of the feline family. Perhaps the puppy was bitten or scratched by a cat, and now all its relatives are perceived by the dog aggressively.

Control your dog for a walk. As soon as the pet sees the cat and begins to demonstrate undesirable behavior, for example, stood up or bared his teeth, give the command “No” or “Stay!”.

If your dog is not strapped on, take it on a leash outside.

If the pet does not obey, you can slightly pull it up and scold. But do not shout, swear and use physical force – this can only aggravate the situation.

The most effective method of raising dogs is positive reinforcement. As soon as the pet sees the cat, switch his attention with a clap, whistle, or using a clicker. After that, be sure to give a treat – a reward for your pet’s attention.

If none of the methods helps, it is worth consulting with a dog handler. Only a professional can assess the character of a dog and choose a competent training program specifically for it.

When working on your pet’s habits, and especially on how to wean your dog from responding to cats, do not forget about some of the characteristics of the pet. Hunting breeds, terriers, and fighting dogs may never completely get rid of the habit of chasing cats. The desire to catch up with smaller prey is in their blood. And, on the contrary, there are more peaceful breeds that can easily master the rules of communication with cats. These include Labrador Retrievers, Spaniels, Newfoundlands, Poodles, Border Collies, and many more.