Snake catcher is a very rare and dangerous profession, which is not taught in any university. It is worth getting confused for a couple of seconds and a dangerous reptile will send you to the next world.

Meet Alexander – serpentologist and snake catcher with 15 years of experience. He is interested in Blunt Nosed Viper (known locally as gyurza) and Central Asian cobra. 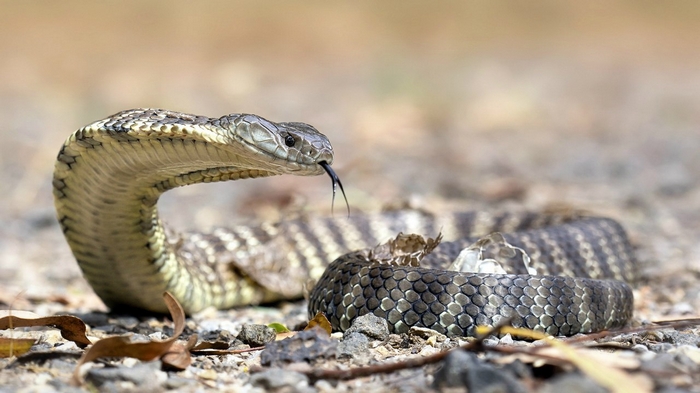 Gyurza lives in dry foothills and on the slopes of mountains overgrown with bushes, in rocky gorges with springs, in river valleys, and on cliffs along the banks of canals.

Sometimes the gyurza are collected by the whole team. Often there were cases when up to 10 snakes were found under one small stone at once.

Here she is the gyurza – the largest representative of the viper family in our fauna. It can reach almost 2 m in length and weigh up to 3 kg. An adult feeds on small animals, such as field mice, less often lizards, sometimes they may not disdain other small snakes.

Having found the snake, Alexander cautiously approaches and slowly moves its head to the side. 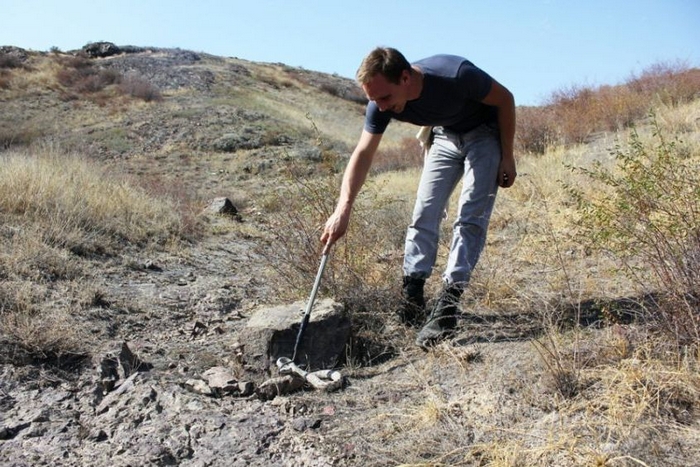 Without making any sudden movements, the snake catcher presses the head of the gyurza with a special tool, the so-called “hook”, and carefully takes it just below the head.

Since this is one of the most dangerous snakes for pets and humans, Alexander has to be extremely careful. In a critical situation, she is capable of making throws towards the enemy.

After the snake has been securely fixed in the hand, the snake catcher places his trophy in a regular linen bag.

Landing in a bag requires a certain skill and sequence of actions. The snake is held by the head with one hand, and the bag is opened with the other. It is lowered into it with its tail down. When the snake’s head is level with the edge of the bag, the animal is quickly thrown to the bottom.

It remains only to tighten the neck. By the way, it is sometimes more difficult to plant small snakes in a bag than large ones.

After a couple of hours of wandering, great luck smiled upon us: we came across the queen of snakes – a cobra. Or rather, a Central Asian cobra. This is a rather large snake, the length of which on average reaches 1.6 – 1.8 meters. Of the 10 species of cobras, the Central Asian cobra is the only one that can be found in the CIS.

The characteristic threatening pose of the cobra is an innate element that is transmitted at the genetic level. Even newly hatched snakes raise the front of the body vertically and expand the neck at the slightest danger. If such a threatening pose is not enough, then the cobra can inflict a fake bite – she hits the opponent with her head, while not opening her mouth, thus protecting her teeth from damage.

Because of this behavior, in natural conditions, it is extremely rare to be bitten by a cobra. In general, most poisonous snakes, before attacking an enemy in the face of a person or animal that is not part of its diet, will warn the enemy by any methods characteristic of this particular species. Whether it’s just a loud hiss, a hooded cobra stance, or a tail twitch that has a horn rattle on it.

Its habitat is similar to gyurza, it is found in the mountains at altitudes up to 1500 meters above sea level. Prefers hilly areas with plenty of covers. The main diet of the cobra is amphibians, reptiles, rodents, and small birds. 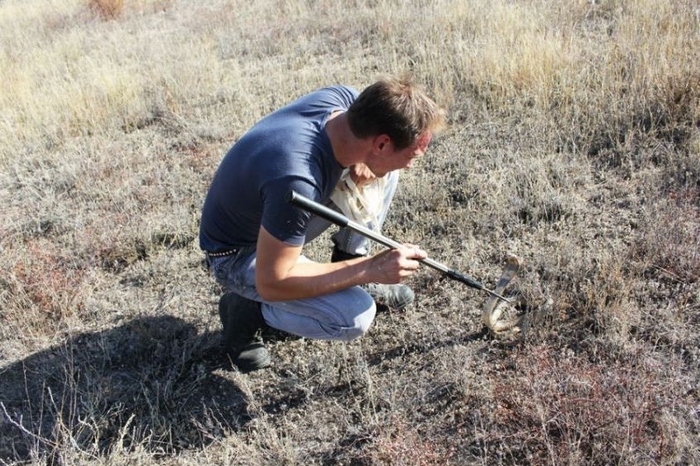 The very manner of the bite of the Central Asian cobra is quite peculiar. If the gyurza inflicts an instant injection with its long teeth and in the next moment throws back its head, then a cobra, whose teeth are several times shorter, most often does not hope for a lightning injection. Usually, she clings to her prey and not only does not lean back immediately, but also squeezes her jaws several times with an effort and, as it were, “fiddles” them, in order to probably sink her teeth and inject the required amount of poison.

The venom of this snake is extremely strong – in addition to paralyzing the nerves, it also destroys the blood. It has a neurotoxic effect, causing convulsions, respiratory paralysis. However, deaths are recorded quite rarely, due to the preventive actions of the Central Asian cobra.

There are fewer and fewer snake catchers because a person who works with poisonous snakes is in mortal danger every day.

It is the snakes caught in bags that we deliver to the car. Here Alexander transplants them from bags into special shipping containers and takes these boxes to the serpentarium. During the day he managed to catch two gyurza and one cobra in such places snakes hide from the unbearable heat when the sun is at its zenith.

By manipulating the hook, an experienced catcher can catch almost any snake. With a hook, he presses the head of the snake for fixation and subsequent grip with his hand, or he can raise the lying snake above the ground and transfer it to a more suitable surface.

We deliver the caught snakes in bags to the car. Here Alexander transplants them from bags into special shipping containers and takes these boxes to the serpentarium. During the day he managed to catch two gyurzas and one cobra.

Before you put the snake in the place intended for it, you still need to carefully lay it out of the bag and again manage to carefully catch it. The first time, as a rule, it is not possible to press the cobra’s head to the floor. The snake now and then strives to bite. Alexander masterfully dodges her attacks, holding the dodgy body with one hand and fixing her head with the other. 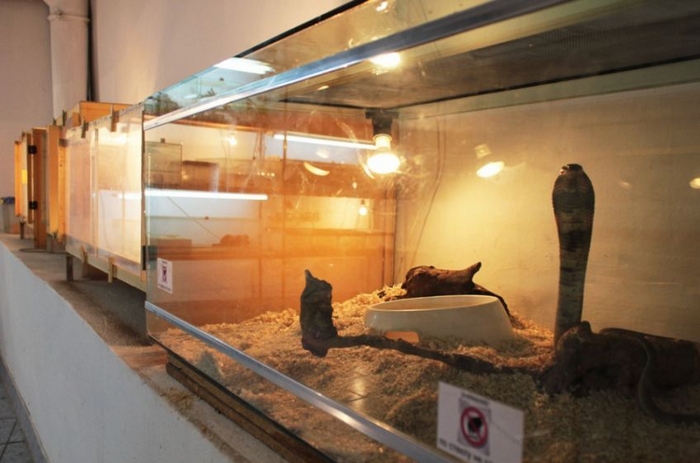 In serpentariums, snakes are placed in designated terrariums.

The hook is also used in the laboratory. It is convenient for them to carry snakes for a short distance. For example, when taking biologically active substances.

A venomous snake can be easily distinguished by its wider head than the body.

The powerful and muscular body of a large specimen is not so easy to hold in the hand. Gyurza, trying to free his head, makes sharp and strong jerks. Sometimes she even manages to bite the catcher. From personal experience, Sasha was convinced of the resourcefulness of these creatures. This is where the fixing bar will help.

Gyurza poison has a pronounced hemolytic effect and is second only to cobra venom in terms of toxicity. When bitten, this snake injects 50 mg of poison, and without timely and correct treatment, deaths are not uncommon. The poison is obtained by mechanical “milking” – massage of poisonous glands. Then it is used to obtain antidote serum and, more importantly, for the manufacture of various medicines. According to its special properties, the venom of gyurza surpasses the venoms of most viper snakes.

When bitten by a snake, in no case should a tourniquet be applied! Firstly, it does not prevent the penetration of the poison into the overlying tissues, and secondly, the tourniquet, especially with bites of a gyurza and a viper, pinching the vessels, contributes to an even greater metabolic disorder in the tissues of the affected limb. As a result, the processes of necrosis and decay are intensified, which is fraught with serious complications. Cauterization of the bite site is ineffective because the length of the snake’s poisonous teeth sometimes reaches more than a centimeter. The poison penetrates deep into the tissues, and superficial cauterization is not able to destroy it. And at the site of cauterization, a scab forms, under which suppuration begins. Remember the main thing – a person after a snake bite must be taken to a hospital as soon as possible, even if it seems that the danger has already passed.