Flyball is fast, loud, and full of fun because the focus here is on speed, play instinct, and the joy of retrieving. As in Formula 1, a start light counts backward every second. Three seconds, red, yellow, green. The wild chase begins.

Contents hide
1 The Process in the Flyball Tournament
2 Flying Ball Not Only for Ball Crazy People
3 Flyball Rulebook: Rules of the Game That Must Be Observed
4 Dog Health
5 Train Flyball

The Process in the Flyball Tournament 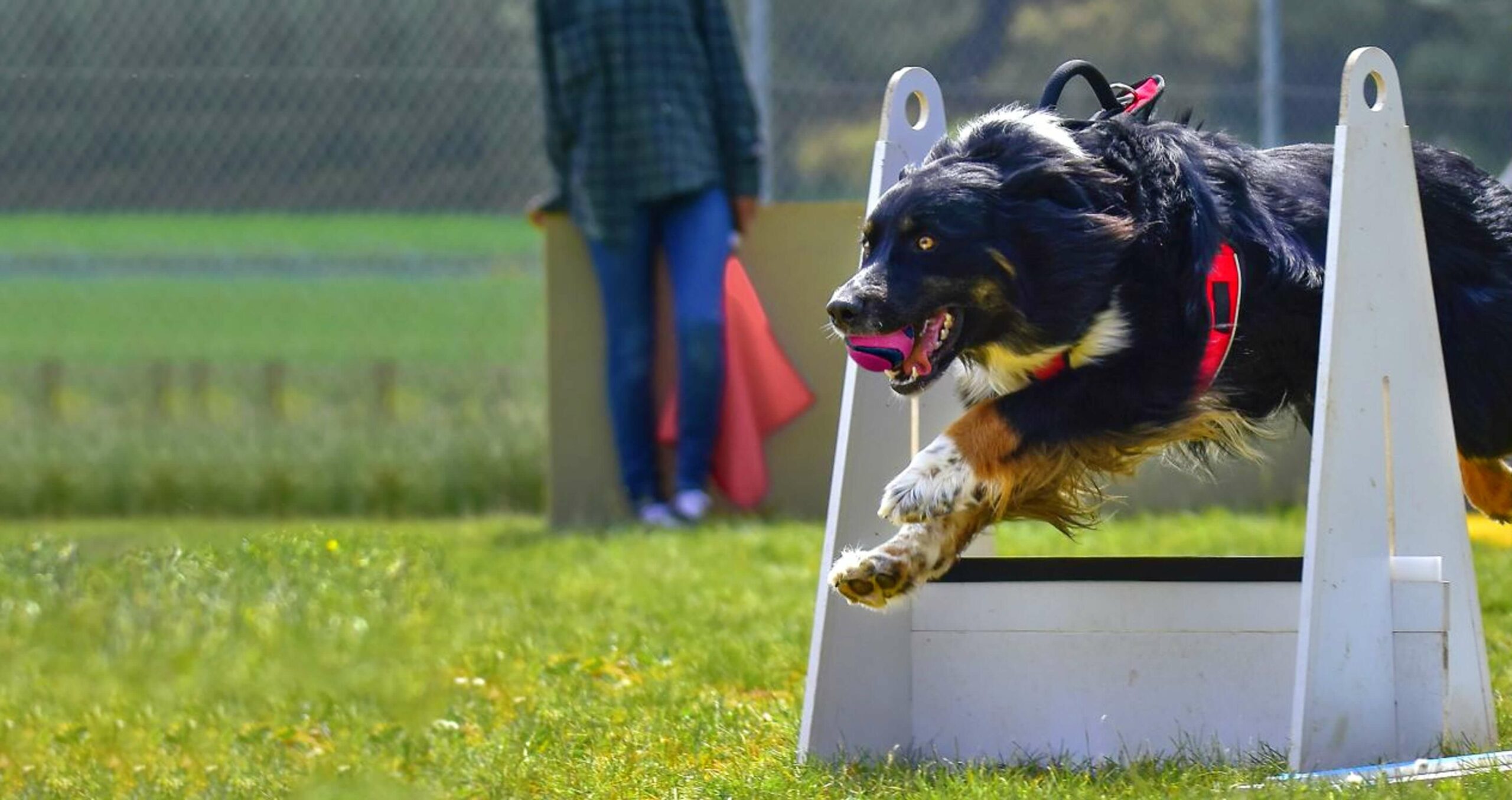 Two dogs start independently across the two starting lines in no time at all. There are two competition tracks set up next to each other, each with four hurdles. A ball-throwing machine adorns the end of the track. The dogs do a swimmer turn there, catch the flying ball and run back to their handler as fast as possible. The handlers run away from the starting line with the reward in hand and shout loudly. This animates the dogs with the ball in their muzzle to whiz over the four hurdles back to the dog handler. The first two dogs are on their way back, so the next two dogs of the teams start a long way behind the starting line. The dogs meet exactly on the starting line. The dogs just starting are cheered on by their people just as loudly. If the fourth and last dog of the race reminiscent of a relay race passes the finish, the running time is stopped.

Ideally, a flyball team is through in less than 20 seconds. The route from the start to the ball throwing machine is around 16 meters long. The hurdles are between 17.5 and 35 cm high. They are always adapted to the smallest dog in the team.

There is hardly a dog sport that is louder. In the flyball, you will find loudly barking dogs and good-humored people cheering their dogs on loudly. You can see at first glance that everyone is having a lot of fun here.

Flying Ball Not Only for Ball Crazy People

Anyone who has ever watched Flyball live will quickly come up with the idea that every ball-crazy dog ​​is in good hands in Flyball and that it is the perfect sport for ball junkies. However, it is not that easy to find the right dog. A ball-crazy dog ​​will surely run over the four hurdles very quickly to the ball throwing machine. He will catch the ball quickly too. The way back can, however, be very leisurely because the dog already has the ball and thus its reward.

The ball should therefore be a pure fetch and the handler has the actual confirmation and reward. This motivates the dog to quickly run back to a dog handler with the ball in its mouth. Flyball is, therefore, suitable for every active dog who likes to work with his human. Social compatibility is very important for the dog. Two dogs from a team run head-on towards each other on a start/finish gate that is only about one meter wide. You have to walk past each other, each in his own direction, without looking at each other. The goal is not just to run back with the ball, but to get confirmation from the dog handler. In addition, there is the second lane at a distance of about four to six centimeters. The opposing team is on the move at the same time. The dogs must not only be socially compatible within their own team but also with other dogs.

Flyball Rulebook: Rules of the Game That Must Be Observed

In Flyball there is a set of rules that defines the exact process and possible errors. Errors can be:

Repetition is necessary for every mistake. The dog that made the mistake has to start again at the end of the relay race. The time is only stopped when he has completed the retrieval exercise without any errors.

There are different levels of performance in flyball. When registering, each team must indicate their personal maximum duration. Then the division into the performance class takes place. Teams of about the same strength should compete against each other so that an interesting and exciting competition occurs. If a team tries to cheat and win because it deliberately slows down in the maximum running time, all faster runs than the specified maximum time of the performance class are considered lost.

Dog health is important to flyball athletes. In recent years, therefore, various ball throwing machines have been changed. In 1991 the catapult boxes were primarily available when it was introduced in Germany. The ball flew forward in a wide arc. Today there are almost exclusively two-hole full-pedal boxes about 60 cm wide at flyball tournaments. You have a significantly lower risk of injury in dogs with strong drive. In addition, the dogs can perform a swimmer turn on the box with a sensible training structure. As a result, the tendons and joints, especially the front paws, are exposed to minimal stress.

Anyone interested in flyball should register for a “Flyball for Beginners” seminar. So everyone has the chance to try out whether Flyball suits them and their dog. Perhaps the enthusiasm from watching is very great, but your own dog may not find it so funny. But if you choose it and your dog thinks it’s just as great, you will soon find that Flyball is addicting.