Golden Retrievers, like Labradors, are among the most suitable dogs for families with small children. People who are not versed in cynology may even confuse these charming beauties with each other, due to some external similarity. Let’s find out what is the difference between them. 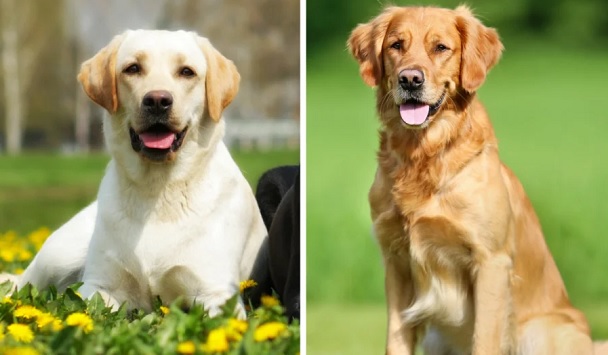 Despite the fact that both breeds belong to the same breed established by the FCI: group 8 (retrievers), class 1, in fact, the Labrador and the golden retriever are two different breeds, and here are the differences between them:

Both breeds are native to England. Retrievers were bred thanks to the efforts of the Scottish Lord Tweedmouth, whose goal was to obtain a dog that could find and bring a shot or killed a bird to the hunter. For a long time, the Scotsman tried to achieve the perfect golden shade of the retriever’s coat, which would make them stand out against the background of swamps and bushes.

Labradors were brought to the UK by fishermen from the island of Newfoundland. To this day, the opinion persists that Labradors appeared as a result of crossing “divers” with smaller dogs. Previously, they were even called almost the same – Newfoundlands large dogs of St. John, Labradors – small. Labradors, like Goldens, were used for hunting. Without any fear, they dived for the bird into the water and delivered it to the hunters.

As a result, England received two beautiful dog breeds, one of which (Golden) is distinguished by its calmness and endurance, while the second is a tireless worker (Labrador). Today, both the first and the second are less and less used for hunting. Both breeds were able to “retrain” into service and military dogs. In addition, they are great artists and have shown amazing results in working with people with disabilities.

Which is Better? Labrador or Golden Retriever: Appearance?

According to the standards of appearance:

The height of the retriever does not exceed 61 cm. Goldens are slightly taller – their maximum height reaches 63 cm.

The skeleton of Labradors is much more powerful, so they give the impression of being heavier and more powerful dogs.

Goldens have long, wavy or straight hair with a thick and dense undercoat. The color of the coat is exceptionally golden (with the exception of mahogany and bright red). Labradors cannot boast of waves and hairs. Their “fur coat” is smooth and even, does not grow more than 5 cm in length. The standard allows several colors: brown, fawn, and black.

The tail of the Labrador is thick at the base and gradually tapering towards the end. Can be lifted up, but never curved towards the back. Golden’s tail resembles a feather due to the presence of a long hair suspension characteristic of setters. Never rises above the backline.

If there are some similarities in appearance between these breeds, then there are much more differences in temperament:

The Golden Retriever is very calm and level-headed. You should not expect obsession and importunity from him. If the owner is not in the mood for communication, such a dog will never climb to him demanding affection and attention. Golden is moderately playful, never makes hasty decisions. He maintains friendly, calm relationships with children and other animals.

Labrador is more naive, simple-minded, and open. These restless dogs adore everyone who lives with them under the same roof and even those who come to visit. He is always ready for games and communication, as he periodically reminds his family members. It is very difficult to calm down this mischievous person. With children, Labradors can have fun and play all day long, but leaving too young children with them alone is not worth it. After playing, the dog can accidentally push or knock the baby down.

Goldens are more suitable for keeping in an apartment since they need physical exertion and the ability to throw out the accumulated energy less than Labradors. However, in order for Golden not to get bored, he needs someone to be constantly with him in the apartment.

It is better to keep the Labrador in a private house with a large and fenced area around. Having free access to the street, the dog will be able to expend energy by running and jumping as much as possible. Those Labradors who live in an apartment need:

Important! Representatives of both breeds are forbidden to be chained and kept in an aviary.

It is quite easy to train both one and the other. The only thing that needs to be taken into account by the owners of retrievers is that they will carefully consider each command and order from the owner. Labradors do everything right away.

Important! Among all the breeds of dogs known to mankind, and there are more than four hundred of them, by the way, Golden Retrievers are in seventh place, Labradors are in fourth.

The differences between the representatives of the two breeds mainly lie in the character and, of course, the color of the coat. It is preferable for families with small children to choose calmer and more sensible Goldens. For schoolchildren and adolescents, an active and restless Labrador is more suitable.