Suddenly they are there – hotspots for dogs. They are not dangerous, but they are annoying and very uncomfortable for the dog. A small stimulus can trigger it and cause a dog to scratch itself permanently or to nibble at the wound again and again. If a dog is always prone to hotspots, it is important to find out the cause and prevent future infections.

What is a Dog Hotspot?

Hotspot means “hot spot”. It is a flat, often circular inflammation of the skin. This occurs all of a sudden. There are two forms of the hotspot:

Causes of Hotspots in Dogs 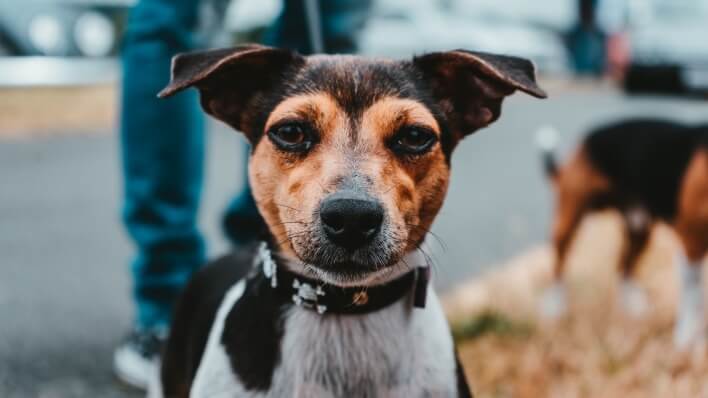 Why a hotspot occurs can often not be found out afterward. It is obvious if your dog suffers from a flea bite allergy, an oversensitivity to flea saliva because then hotspots arise more often after flea bites.

Long-haired dogs or dogs with a lot of undercoats are more likely to suffer from hotspots in summer because the thick undercoat prevents the skin from ventilating. This air-poor environment, together with moisture, offers bacteria popular breeding ground. Sometimes even the smallest stimuli are sufficient, such as contact with nettles or encountering a thorn bush.

Shaving during surgery at the vet can also irritate the skin. Parasitic agents, detergents, and cleaning agents are also possible causes.

Incompatibilities as a cause of hotspots

Even the slightest intolerance to certain feed ingredients and a weak immune system favor hotspots. If your dog suffers from a malfunction or weakness of the kidney and liver function, this has an influence on the skin environment and can lead to an imbalance.

Certain bacteria such as B. Staphylococci can then multiply inappropriately and the risk of skin inflammation increases. Nerve damage or pain are less common causes.

In principle, however, a punctual, tingling sensation or pain due to a more internal disease such as an arthritic joint can lead to (weeping) dermatitis if the dog tries to alleviate the feeling by licking.

If your dog has only recently met you and he gets a hotspot shortly after his arrival, it may be because of the changeover.

Every change is stressful for a dog, regardless of whether it is moving, a new family member, or something else.

During this period, the function of the immune system is reduced. This, in turn, can cause certain bacteria to multiply that were previously on the dog’s skin.

Symptoms of the Hotspot in the Dog

Hotspots appear all of a sudden, often overnight. A small, external stimulus leads to the dog feeling the need to lick or scratch it. A wound is created in which bacteria penetrate and which eventually become infected.

Suddenly the dog has a mostly oozing wound, the secretion of which sticks the surrounding fur (hair sticks together). He is very itchy and tries to keep scratching or licking the wound. That leads to a vicious circle.

Hotspots are round to oval in shape, usually not much larger than a coin, but can also be the size of the palm of your hand. They smell unpleasantly sweet due to the inflammatory processes.

Are Hotspots Contagious in Dogs?

Hotspots in themselves are not contagious, neither to other dogs nor to other animals or people. However, they can be caused by contagious diseases, e.g. B. Skin fungus and mites.

Sometimes the dog has to be prevented from licking and nibbling with a ruff because this keeps the wound open and more bacteria can get inside. The cause must also be combated so that no further hotspots occur in the future.

If hypersensitivity to certain stimuli is known to be the cause of the hotspots, this must be prevented. In the case of a flea saliva allergy, this means ensuring a good flea defense. If your dog reacts sensitively to common insects such as mosquitoes, attempts can be made to repel them with unpleasant odors.

Long-haired dogs can be prevented with good coat care. Brushing out loose undercoats is particularly important so that air can get to the skin. With some dogs, it is not that easy, so a visit to a dog groomer can also help.

Some dogs are very sensitive to chemicals. Some detergents and cleaning products are irritating to dogs’ skin, so changing the products you use may bring relief. If your dog’s lying surface is made of synthetic fibers, you can try untreated natural fibers such as organic cotton or sheepskin.

If the cause of hotspots seems inexplicable, the skin irritation could also be caused by incorrect food. With an exclusion diet, you can rule out possible feed intolerances. In the case of a food mite allergy, however, only avoiding dry food will alleviate the symptoms.