The average running speed of a typical average dog ranges from 10 to 15 km / h. And the maximum speed for many breeds is about the same: for example, German Shepherds and Dobermans run up to 35 km / h, Caucasian Shepherds – up to 30 km / h.

But there are unique people who are able to show results almost twice as fast. The speed of these swift-footed nuggets is fantastic – up to 65 km / h.

The Fastest Dogs in the World 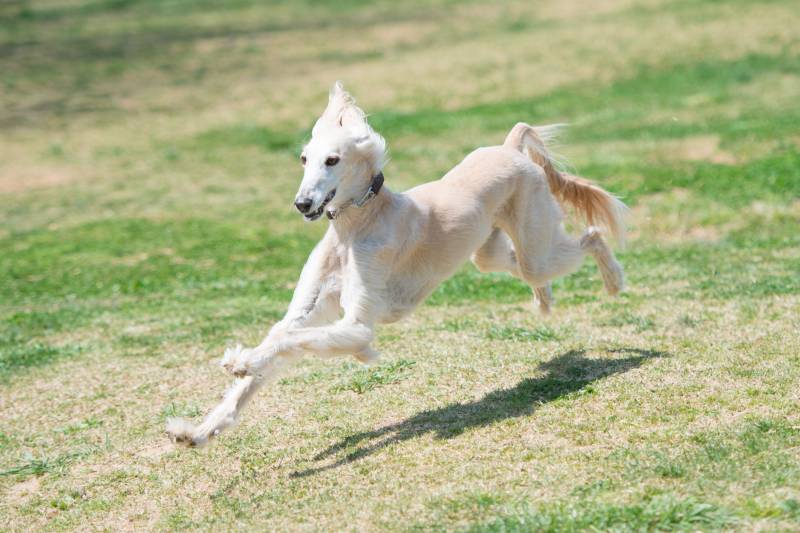 The hunting English greyhound is recognized as the champion of all champions. Its speed at around 67.32 km / h is recorded in the Guinness Book of Records. Incredibly, this is more than 18 meters per second – none of her relatives can run so fast.

These slender champions are tall at the withers – no less than 70 cm, with an average weight of no more than 40 kg. These swift-footed individuals have long limbs, a muscular body structure. They are extremely good at short distances, but long races are beyond their strength and are clearly contraindicated. They are unable to chase games for long due to a lack of stamina.

Persian greyhounds – Saluki – are slightly inferior to Greyhounds in speed – their limit is 65 km / h. But they are more enduring. Their height at the withers does not exceed 70 cm, and their weight is up to 25 kg. Despite their rather dry build, they are physically strong dogs.

Arabian greyhounds – Sloughis – reach speeds of up to 65 km / h, in terms of endurance they are absolutely not inferior to the Saluk. True, unlike them, Sloughis are incredibly flexible, capable of sharp turns. Their height at the withers is up to 72 cm, weight – up to 32 kg. These dogs have beautiful thin skin and high muscular limbs.

The first races of greyhounds for an artificial hare date back to 1776, when the British began to practice them. Since then, certain rules have been developed that govern these ancient competitions. For example, a dog can start a running career no earlier than nine months of age, and end at nine years old.

Only dogs of one breed are allowed to compete. In order for the dogs to run out onto the track at the same time, there are doors in the back of the start boxes, where the dogs are launched, and in the front, there is a grill. When the lattice rises, the dogs quickly run out at a distance in pursuit of “game”.

The winner is the dog who is lucky enough to cross the finish line first.

In Europe, special racing stadiums (film tracks) began to appear more than a hundred years ago. Each dog track has its own specifics: the length of the track is from 450 to 500 meters and the rules are a start with a handicap, a long track with hurdles.