Going on a trip, it is easier for a while to entrust looking after the dog to friends or someone close to you. But what if there is no one to ask for help, or is it planned to move to another city or even another country for permanent residence? The only sure way is to take your doggie friend with you. Animals can be transported on trains, but can dogs be transported on an airplane? Let’s try to figure it out.

Contents hide
1 Conditions of dog transportation
2 Which dogs are not allowed on the plane?
3 Transportation of dogs in the cabin and the baggage compartment of the aircraft
4 Aircraft dog carrier
5 Required documents for transporting an animal
6 How much does dog traveling cost?
7 Preparing your dog for air travel

When planning to go on a trip with an animal, you should carefully study the rules for transporting dogs on an airplane in advance: 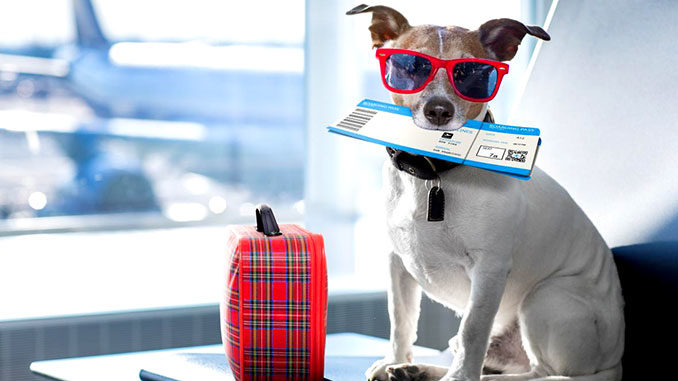 Which dogs are not allowed on the plane?

Traveling by air is a serious business. And of course, not every dog is allowed to fly unhindered. So, it is forbidden to fly with sick animals. This refers to serious infectious diseases: rabies, plague, leptospirosis, microsporidia, and trichophytosis, infectious hepatitis, parvovirus enteritis.

Also, the air carrier company has the right to prohibit the owner from flying with a brachycephalic dog (Pug, Boxer, Shar Pei, Pekingese, etc.). Such animals with a shortened muzzle on the plane may have breathing and heart problems due to the non-standard structure of the skull.

Heavy dogs whose body weight, together with the weight of the shipping container, exceeds 50 kg will be denied. A large dog will not be able to accompany the owner during the flight.

It is unlikely that a dog with a dirty coat and an unpleasant smell, as well as an animal that behaves extremely restlessly in a shipping container, is not allowed on the flight (even small dogs and puppies cannot be carried on hand).

Several airlines do not allow puppies under 3 months old on board, which, due to their age, have not yet had time to receive important vaccines. They may not be allowed on the plane with a pregnant bitch, so that the animal does not whelp during the summer. It is also possible to ban the transportation of an elderly dog ​​(over 10-12 years old) with poor health, as well as an animal of any age with diseases of the heart and blood vessels, respiratory and nervous systems. Finally, it should be mentioned that no more than 5 dogs can be transported with you at the same time, regardless of the size of the animals.

Depending on the size of the animal, the airline representatives can offer transportation of the dog both in the cabin and in the luggage compartment. Animals whose weight with a shipping container does not exceed 8 kg are allowed to travel in the cabin in a container near the owner (a carrier with a dog is installed near the owner’s feet). In this case, you can simultaneously transport two adult dogs or three puppies, if their total weight with containers is not more than 8 kg.

If the total weight of the animal and the container is over 8 kg, then the dog can be transported on the plane only in the baggage hold. It is also allowed to carry potentially dangerous dogs there: fighting, guard, guard, and aggressive dogs of any breed.

Now let’s talk about what a container or cage should be for transporting dogs:

Required documents for transporting an animal

The flight with the dog on the plane is possible only if you have documents. So, for unimpeded transportation in Russia and the CIS, you will need a duly issued veterinary passport (indicating the breed of the animal, its age, color, nickname, sex, owner’s data, notes on vaccines made, and anthelmintic and anti-flea and anti-tick treatments are required). In addition to the veterinary passport, a state certificate number 1 will be required, indicating the data of the dog (name, sex, age, etc.), as well as information about the upcoming route and the results of the examination of the animal. Such a document can be obtained at the state veterinary clinic, having arrived there with the dog and its veterinary passport. Important: the state certificate should not be received earlier than 5 days before departure, otherwise it will be considered invalid.

When planning to go on an overseas flight, we strongly recommend that the owner familiarize himself with the legislation of the country in advance to clarify whether it is possible to bring pets there at all, what kind of dogs can be on the plane, whether the dog should be microchipped, how old the dog should be, what vaccinations should be done and what documents may be required.

How much does dog traveling cost?

It is allowed to carry service dogs and guide dogs in the aircraft cabin free of charge and without a shipping container (if supporting documents are available). For an ordinary domestic dog, you will need to pay as for non-standard baggage (a special plane ticket for a dog is not required).

Preparing your dog for air travel

When figuring out how to transport a dog on an airplane, the owner should be aware of the preparation for this no doubt exciting event. Let’s find out what needs to be done sometime before the flight: 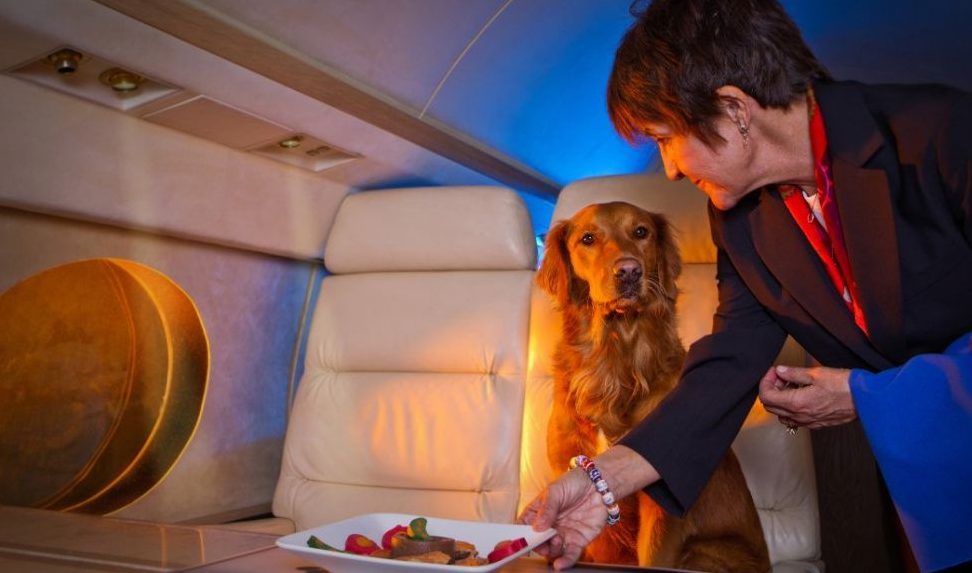 Finally, immediately on the day of departure, you need to feed the dog satisfyingly, but moderately, an hour and a half before leaving the house, and then walk with it. It is important to check all the documents, to clarify whether all of the necessary items have been taken, to calm down and a couple of hours before the departure time go to the airport.