It is not uncommon for a fully grown, well-behaved dog to suddenly pee in the apartment and house, especially on the carpet or in bed – to the great chagrin of its owner! Even older dogs are clean animals that quickly learn to do their business outside of their home. So why do they break this rule sometimes? Pettime reveals more about house training in dogs and the reasons why he can unlearn it.

Contents hide
1 How to Stop a Puppy From Peeing in the House
2 Why Pee in the House?
3 Dog Pees Out of Fear, Frustration, Anger, …
4 Don’t Punish Your Dog!

How to Stop a Puppy From Peeing in the House 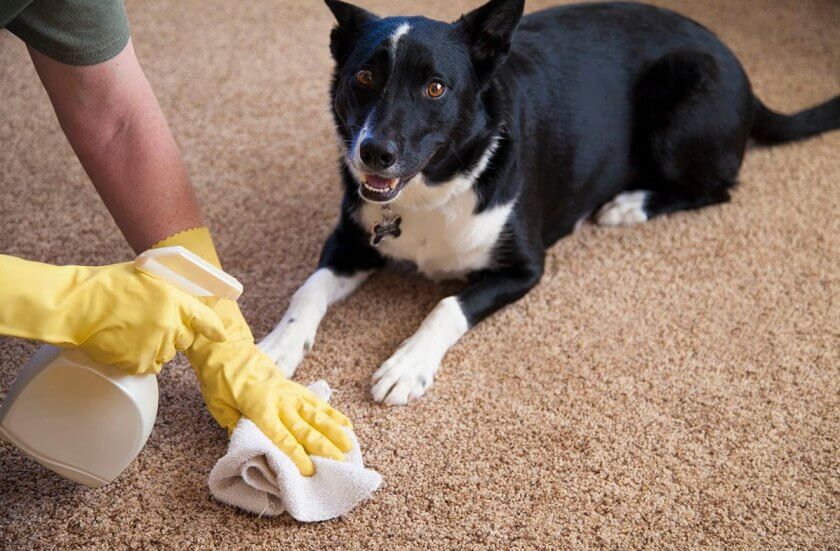 If it were difficult to house-train a four-legged friend and prevent the dog from peeing in the apartment, then it would not live with us! Then few people would endure her presence by her side. But why are dogs house trained?

As early as three weeks of age, a puppy begins to move away from its mother. Then the dog does the business a little further away and avoids soiling his sleeping place.

Later on, apart from a few slip-ups, it doesn’t take long for dogs to learn that it is forbidden to do “big or small” in the house or apartment. But house training in dogs is and remains a rather strange business. It is not the case with all animals that they would meet the natural needs of this species outside in the garden or on the street.

This is not about intelligence! A chimpanzee, for example, is known for its intelligence. He is able to solve complex problems, learn certain sign languages, and use tools. Still, if he lived with you, you couldn’t teach him to go out into the garden to do his business. The monkey cannot learn that and therefore needs diapers all its life if it is to live with you.

Why Pee in the House?

So why is your dog urinating in the house? And what can you do about it?

There are many possible reasons for this behavior. Often enough it is simply a matter of forgetting a basic rule.

The first reflex is to see a veterinarian. There are actually diseases that make dogs irresistible to urinate. He can then not hold back and has to pee where he is.

The doctor can explain how to treat bladder infections or, for example, diabetes in dogs. And then there are other cases too, namely those in which the dog is healthy. Then the problem lies with his behavior and not with an illness.

Again, the exact reasons for his actions may vary. Without going into too much detail, these can be roughly divided into two different categories:

Now, of course, you will say that in the end, it comes to the same thing for you! Yes of course. But the exact motivations of your dog mean that there are different ways to approach the problem.

Imagine that your dog is afraid to go into the garden because one day when he was about to calmly lift his leg up against the wall, he was scared by the sound of a truck losing its load. Since that day he has preferred to hold back and do his business at home, where he does not have to be afraid of being disturbed.

Or just think about the fact that it bothers your dog a lot if you go to the movies late in the evening and leave him at home because he is so attached to you. And that this can occupy him so much that he falls into a kind of panic that triggers the irresistible urge to relieve himself in the apartment or house.

Animal feelings are given great importance today, and if you call in a dog trainer and dog behaviorist to correct this problem, which may have been around for months, he or she will be very careful about your dog’s state of mind too.

Of course, the animal’s emotional state differs depending on the case. Above all, it is fear that dominates the dog and leads it to act in the same way as the fear of the truck that has become impressed on it. In the second case described, it would be the frustration or anger at being separated from you.

A dog trainer or behavioral expert for dogs like the popular Martin Rutter is specially trained to help you train and find a quick and efficient way to fix the problem.

The only advice we want to give you, and which applies in all cases, is:

Don’t punish your dog. This is only useful in exceptional cases and, in most cases, on the contrary, will prolong the duration of the problem.