The curious house tigers usually check everything that comes under their noses. But sometimes a kitty still eats food that is harmful to them. Oftentimes, a cat owner does not know what to give his darling to eat. The following article reveals why cats and kittens are not allowed to eat tuna.

Contents hide
1 Can Cat Eat Tuna?
2 Can Cats Eat Canned Tuna?
3 Particular Caution is Required in Cats with Kidney Disease
3.1 How often can a cat have canned tuna?
3.2 Can cats eat raw fish?
4 Use Only Tuna From Pet Shops 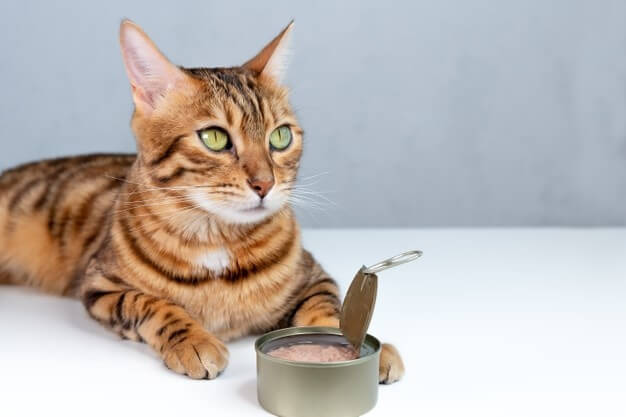 It is well known that furry noses are crazy about fish. The canned tuna is no exception. Basically, the fish is healthy due to its omega-3 fatty acids and the associated anti-inflammatory effect. It provides the house tigers with important vitamins that they need to live. But at the same time, the fish are contaminated with mercury. The concentration of mercury is particularly high in tuna. For this reason, cats are only allowed to eat fresh, raw tuna in oil, if at all, only in small quantities: it can lead to symptoms of poisoning in house cats.

Particular Caution is Required in Cats with Kidney Disease

Canned tuna is particularly salty, which in principle is not a problem. But you should keep the tuna away from a cat with kidney disease. Cats with kidney disease are not allowed to eat tuna in their own juice because of the high salt content.

This would only worsen the kidney problems afterward.

How often can a cat have canned tuna?

There is no fixed amount that measures the point at which tuna is harmful as cat food. But basically, it is advisable not to feed your beloved kitty tuna more than once a month. Instead, cat owners should use the lists that can be found on the Internet to find out what cats are allowed to eat.

Unseasoned and raw fish is much healthier than canned tuna, which is contaminated with harmful substances. That is why all saltwater fish, but also herrings, carp, pike, and perch are much healthier and therefore better suited as cat food. Handing the fish to the house tiger in cooked form minimizes the risk of infection for bacteria and parasites.

Use Only Tuna From Pet Shops

You should only feed the cat in small quantities of tuna in its own juice. Cats must not eat oils, sauces, or vegetables such as cucumber and onions with tuna. In exceptional cases, it can occasionally be useful to feed the cat with tuna. Then do the following: