African Lake Malawi is a real klondike for cichlid lovers. At the moment alone, more than 500 species inhabiting it have been described, but many scientists agree that this is far from the limit. Let’s take a closer look at this amazing group of cichlids.

The tectonic origins of Lake Malawi, which led to the isolation of the original ancestors of the cichlids, led to an amazing evolutionary event – a giant spike in speciation that continues to this day.

Most species of Malawian cichlids are found nowhere else but in the lake. Its origin and rather extreme environmental conditions have led to the emergence of a number of adaptations in fish that allow them to survive in such an unfavorable environment. Among the most important are the following:

Cichlids of Lake Malawi have gained immense popularity in hobbyist circles due to their unpretentious maintenance, interesting behaviors, and extraordinary variety of colors. It is assumed that this variegated coloration is a way of identifying their congeners.

In the countries located along the shores of Lake Malawi, some species of cichlids are the target of local fishing.

Cichlids of Lake Malawi are quite diverse in appearance. Common features include:

Almost all colors of the rainbow can be found in the coloring of Malawian cichlids. Even in nature, there are yellow, blue, variegated, and other forms. And if you add to this a huge variety of colors of artificial forms, it becomes clear that any aquarist can easily choose a Malawian according to his preferences.

Malawian cichlids live exclusively in Lake Malawi, which is located in East Africa. It was discovered back in 1859 by scientist and explorer David Livingston and is part of the African Great Lakes group. The former name of the Lake – Nyasa, stuck in the name of some cichlids, for example, Queen of Nyasa. The waters of the lake are washed by the territory of three African countries – Malawi, Mozambique, and Tanzania. 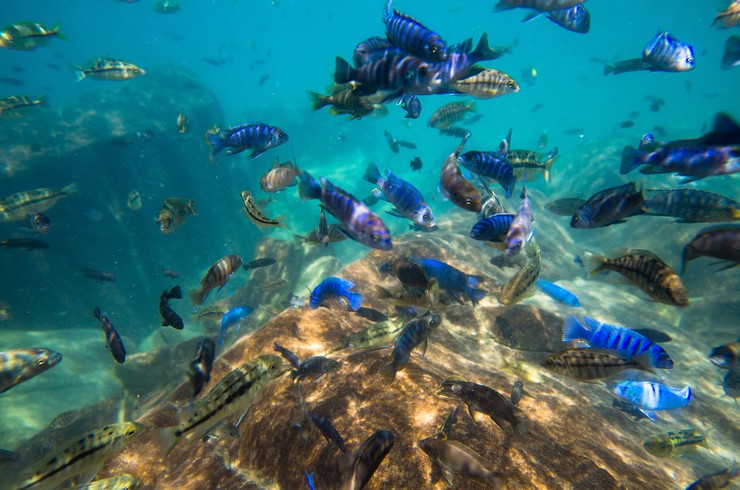 The lake is of tectonic origin, that is, it was formed as a result of the divergence of two lithospheric plates, the crevice between which was filled with water. The bottom of the lake is filled with sedimentary rocks, and the coastline combines gentle slopes and heaps of rocks.

Food sources in the lake are rather limited; the basis is Phyto- and zooplankton, as well as algal growths on the rocks, which determined the food specialization of the cichlids living here. According to this criterion, there are two main groups of Malawian cichlids – Mbuna and Utaka.

Representatives of the Mbuna group are the most numerous and popular in the aquarium hobby. The name can be translated from the language of the natives as “fish living in the rocks.” These cichlids live near rocky shores and feed mainly on algae. In contrast, representatives of the Utaka group are fish that prefer open water. Their diet is based on plankton, small fish, and mollusks.

When choosing an aquarium for Malawian cichlids, it is necessary to take into account the maximum size of adults (on average 10-12 cm) and the pronounced territoriality of most species. The minimum recommended aquarium volume starts at 150 liters.

The natural landscapes of Lake Malawi are not diverse, therefore, compositions of natural stones and driftwood are usually created in the aquarium. A large number of shelters is important if there are several species or a group of the same species. Quartz sand or medium-sized pebbles are used as soil. It is worth remembering that the Malawians love to dig in the ground. Most living plants are incompatible with cichlids and will be destroyed or dug up by them. Only hard-leaved species, for example, anubias, can withstand the onslaught. 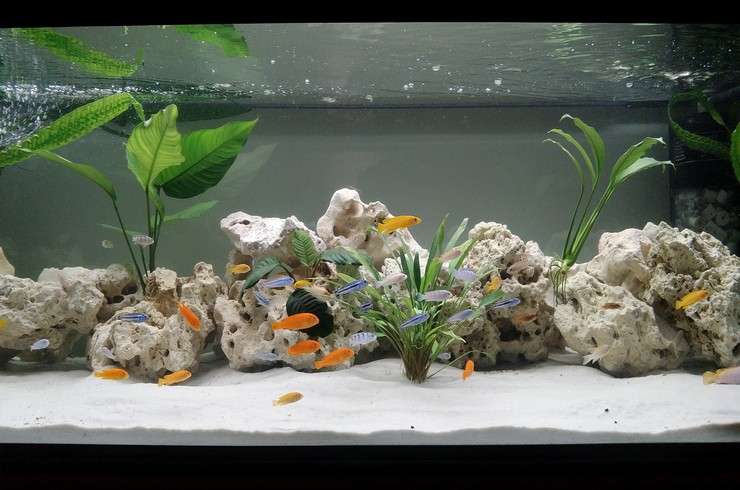 Malawian cichlids love clean and oxygen-rich water, so your aquarium should be equipped with a powerful filter, preferably an external one, and a compressor. It is necessary to replace 20% of the water in the aquarium with freshwater weekly.

As noted earlier, Malawian cichlids are territorial fish, so the problem of cohabitation and the correct selection of neighbors is quite acute.

The best option for keeping representatives of one species would be a “harem” – when there are two or three females per male. If the volume of the aquarium allows, several groups can be housed together, but in any case, females should prevail. Shelters will also be needed so that the fish can hide from each other as needed. 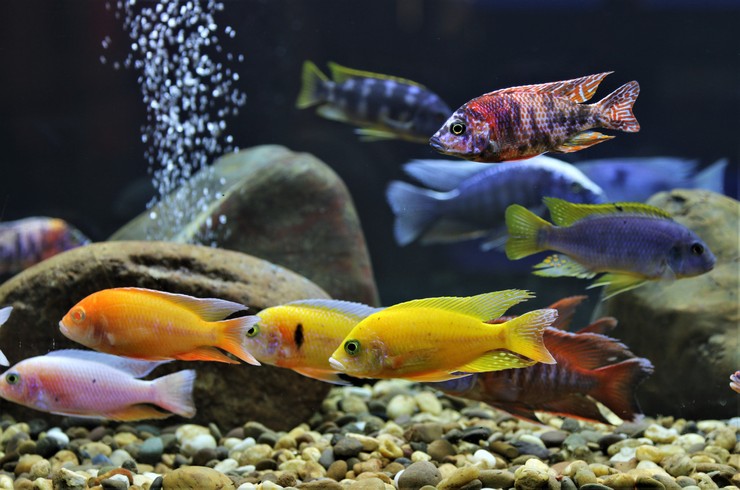 Other species of Malawian cichlids of similar size will be the best neighbors for a community aquarium. In this case, females should prevail. It is better to raise fish together from a young age, then the cichlids are calmer towards each other. Malawians get along well with large catfish – pterygoplicht or plekostomus. There were cases of successful cohabitation with large barbs.

Malawians go well with relatives from the neighboring Lake Tanganyika.

Often, Malawian cichlids and American cichlids are combined in one aquarium. Unfortunately, such cohabitation will not be the best choice due to the difference in water parameters and food methods.