If your dog suddenly starts scratching itself (“pseudo-scabies”) and also develops bald patches in the coat and reddish pustules, it is possible that it has contracted a mange infection (Latin: scabies) from mites and the incubation period is coming to an end. Since this can be very difficult not only for the dog but also very contagious for other dogs, the right measures should be taken immediately so that the animal is fine again soon after therapy.

Mange in Dogs in Brief

Definition of Mange in Dogs 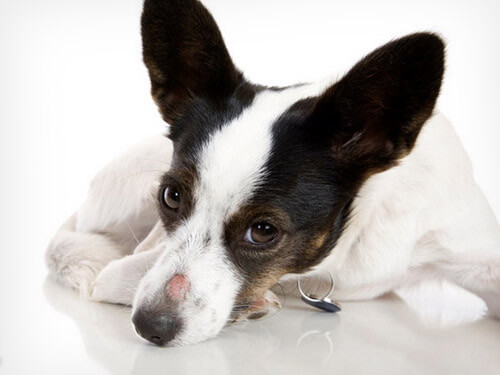 Mange is a skin and coat disease in dogs caused by mites. In certain cases, mange can spread to people. The disease is mainly transmitted through contact from dog to dog and is an extremely painful affair for four-legged friends.

Causes of Mange: Parasitic Mites are Transmitted From Dog to Dog

The cause of mange is always a parasite infestation – in the case of mange, it is microscopic mites, i.e. tiny arachnids that lay their eggs in the dog’s skin and then go through all stages of their development on the host animal.

In the case of dogs, the mange is caused by so-called grave mites. The scientific name for this is Sarcoptes scabiei var. Canis. In individual cases, these grave mites can also attack cats. The mange mites can even be transmitted to humans. However, humans are not the right host for the parasites, which consequently cannot go through their full life cycle here and die prematurely.

On and in the skin of a dog, however, mange mites go through all stages of their life. They eat drilling channels in the skin of the four-legged friend and feed on its tissue fluid and cells. This can be extremely painful and uncomfortable for the animal. Mange is highly contagious in dogs and is usually transmitted from dog to dog. Transmission from fox to a dog is also not uncommon. In most cases, direct contact with a fox is not even necessary. Dogs often catch the unpleasant mites on walks in the forest.

Symptoms of Mange in Dogs: Itching and Hair Loss

A dog infected with mange mites will develop red pustules and lumps on the skin that are slightly raised and about the size of the heads of a pin. At the beginning of the disease, these occur in most cases on the head, and here particularly on the outer sides of the ears. Later, the pustules spread to the limbs and eventually the entire body of the dog.

In addition, the affected animal suffers from hair loss and persistent itching, which is usually aggravated in a warm environment. The resulting frequent scratching causes the skin to become inflamed and bloody crusts form. It is not uncommon for mange to result in fungal or bacterial infections unless treated in the early stages. The dog can also lose a lot of weight.

Treatment and Duration of Therapy for Mange in Dogs

If a dog shows the symptoms described above, a veterinarian should always be consulted. He will first diagnose the type of mite infestation and then treat it with solutions, tinctures, and special shampoos. If a fungal infection has occurred, this must also be treated with appropriate means. Even before visiting the veterinarian, the animal can be relieved with a mixture of borax and hydrogen peroxide.

Consult a veterinarian if there is no significant improvement within a short period of time.

When the dog will be healthy again depends, among other things, on the severity of the infestation and the duration of the illness. If large parts of the animal’s body are already affected by the mange, longer and more intensive treatment is of course necessary than in the early stages of the disease. In general, it can be said that in the case of a large-scale mite infestation, it takes about two to three months for complete healing. Timely consultation of the veterinarian with a timely start of effective treatment, on the other hand, enables healing within a month.

Mange in Dogs: Hygiene is Everything

Proper hygiene is paramount in treating mange. This also means that the affected dog must be kept in isolation from the time the disease is discovered, as the possibility of other animals being infected cannot be ruled out. If you keep other animals in your household, make sure that they do not come into contact with the sick animal. Humans should also be extremely careful when handling a dog with mange. Direct contact should be avoided and the animal should only be touched with gloves. You can also do this: