Dog owners diagnosed with osteosarcoma from their veterinarian must be brave. Because it is a rare but very aggressive bone cancer that confronts you with difficult decisions.

Dog Osteosarcoma: What is Bone Cancer?

In bone cancer, malignant growths, i.e. tumors, develop in the bones. The name comes from the Greek word “ostéon” for “bone” and “sarcoma” for a certain type of tumor that tends to form daughter tumors, i.e. metastases.

Bone cancer in dogs often spreads to the lungs. Therefore, if osteosarcomas are suspected, rapid action is required in order to take advantage of possible treatment opportunities. If cancer affects the cartilage, experts speak of chondrosarcoma.

Malignant tumors on the bone can also be secondary tumors. Then it concerns metastases from other primary tumors, which in turn have spread.

Symptoms: Signs of Bone Cancer in the Dog 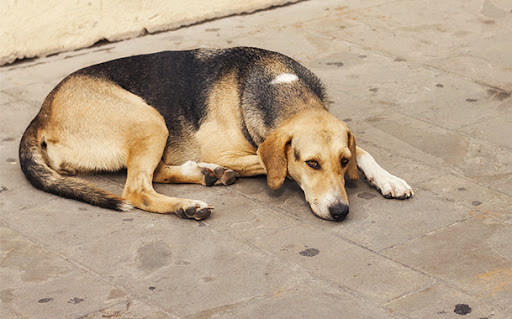 Osteosarcomas metastasize very quickly. Unfortunately, this means that in 90 percent of cases, metastases are present before the first symptoms appear. This reduces the chances of recovery.

Symptoms of bone cancer are very painful. Specifically, these include:

Diagnosis of Osteosarcoma by the Veterinarian

To diagnose osteosarcoma in dogs, the veterinarian needs an X-ray. Additional imaging methods such as computed tomography (CT) can also be used.

To confirm the serious diagnosis, a biopsy, i.e. the examination of a tissue sample, is necessary. This takes place as a fine needle biopsy or under anesthesia in a small operation.

Unfortunately, micro-metastases are common in bone cancer, of which only a small percentage can be seen at the time of diagnosis.

Bone cancer is rarely curable. The therapy options depend on the findings. If the veterinarian has diagnosed osteosarcoma, this, unfortunately, has a significantly shortening effect on almost all dogs. This also applies if therapy appears to be useful.

If there is the hope of gaining symptom-free time, the treatment for osteosarcomas is as follows:

Unfortunately, owners of dogs suffering from osteosarcoma are often faced with the question:

Around 80 percent of bone tumors occur on the limbs. If possible, the affected leg is surgically removed. Of course, the overall constitution must be taken into account beforehand.

Chemotherapy follows an amputation to prevent metastases from forming. If the primary tumor in the bone could not be removed, chemotherapy is ineffective. Radiation therapy has a pain-relieving effect, but cannot fight the tumor.

By this, we mean the administration of pain reliever medication in order to give the four-legged friend a high quality of life. However, bone tumors sometimes cause so much pain that they cannot be controlled with tablets and the like.

Of course, painkillers also play a major role after an amputation. They are necessary to maintain the quality of life in everyday life.

If the pain is so severe that the four-legged friend suffers, putting it to sleep is the only way to save your beloved companion from suffering. This is also the case if the dogs have difficulty breathing due to metastases in the lungs. Or if the affected bone threatens to break, but amputation is out of the question.

Euthanasia saves the dog unnecessary suffering. The decision to do this is never a light one – your vet will help you determine the right time.

Which Dogs are at Risk?

Large dogs, especially XXL breeds such as the Great Dane or the Irish Wolfhound, suffer from bone tumors more often than the average. Your risk is increased up to 200 times. A Deerhound has a 15 percent risk of dying from bone cancer.

Rapid growth appears to increase the risk, which should be considered when feeding young dogs. Accidents and trauma with bone involvement as well as early castration in dogs play a role as further risk factors.

The average age of onset and the time of diagnosis are seven years, but there are exceptions upwards and downwards.

Osteosarcoma: Prognosis and Chances of Survival

Unfortunately, the chances of recovery from bone cancer in dogs – unlike in cats – are poor, they are in the single digits. That is why some owners decide after the diagnosis to have their four-legged friend euthanized as soon as possible.

A bone tumor inexorably leads to the destruction of the bone. This causes great pain and can lead to a spontaneous fracture at any time. Without removal of the primary tumor, the four-legged patients die in most cases within three months.

If there is a chance of complete removal of the primary tumor and if the dog is in a good constitution, the therapy can extend its survival time. More than half of the dogs live longer than a year under these conditions and over a third even more than two years. This is a considerable amount of time for a dog’s life.