Pemphigus is a skin condition affecting dogs. There are different forms – all of which are rare. In all variants, the dog’s immune system is directed against its own skin cells, more precisely: It destroys the connections between the layers of the skin. A disease that literally “drives you out of your skin”.

Symptoms of Pemphigus in the Dog

In dogs, the disease is mainly noticeable by reddened areas and crusts on the skin. The head – especially the area around the eyes, ears, and nose – as well as the paws and groin are most affected. Blisters can appear on the inside of the ears, which, unlike in humans in dogs, are not typical of autoimmune dermatoses.

If the pads of the paws are affected, this can lead to lameness in the dog.

A disease related to the pemphigus complex is lupus erythematosus. If it is the discoid shape, the nose is most affected. The first symptom is a loss of pigment: the nose becomes lighter. In systemic lupus erythematosus, there is also the formation of antibodies against joints and organs.

What Causes Pemphigus in Dogs? 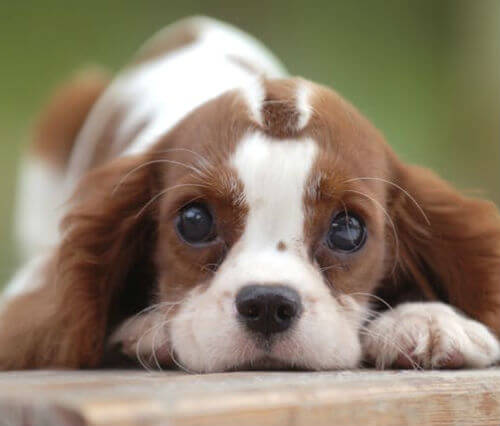 The causes of rare skin disease in dogs are unknown. However, hereditary predisposition is possible. This is supported by the fact that the disease occurs a little more frequently in Akita Inus and Chow Chows. The autoimmune reactions to their own skin are also minimally common in Labrador Retrievers, Dachshunds, and Dobermans.

Pemphigus foliaceus can develop from chronic inflammation of the skin. Certain drugs are also suspected of being able to trigger pemphigus. However, there are no reliable findings on this. Sun exposure often makes symptoms worse. The disease can occur at any age.

As an autoimmune disease, pemphigus is not contagious.

Since pemphigus is rare in dogs and can be confused with many other skin diseases, only the veterinarian can make a sure diagnosis. There are numerous medical conditions that show similar symptoms. These include allergies or infestation with mites such as hair follicles or ear mites. Fungal infections can cause similar symptoms as well. The veterinarian makes the diagnosis by ruling out other diseases. The examination of a skin biopsy brings security. The vet takes this under general anesthesia.

Since it is an autoimmune disease, the therapy targets the immune system. Medicines are used that weaken the immune system. For example, cortisone-containing glucocorticoids such as prednisolone or dexamethasone. The dosage depends on the severity of the disease and the weight of the dog. For example, therapy of 2 mg prednisolone per kilogram of body weight per day is recommended for a few weeks.

For dogs, therapy with azathioprine is also possible, which is highly toxic for cats. The active ingredient is a supplement to cortisone in order to be able to reduce its dosage in the event of severe side effects. Over time, the dose can be reduced in consultation with the veterinarian. However, pemphigus usually requires lifelong medication. It is important that therapy is only given if the diagnosis is confirmed. If, for example, mites are behind the symptoms, these can worsen with the administration of cortisone.

Prognosis and Life Expectancy in Pemphigus

Of the different variants, pemphigus foliaceus is associated with the most favorable prognosis. In around two-thirds, the symptoms recede or come to a standstill during therapy. With lifelong therapy, some four-legged friends can become symptom-free. But cortisone can have numerous side effects. These include liver and bone marrow damage.

The dogs are more susceptible to infections and stomach ulcers under immunocompromising therapy. It is advisable to have a blood count done at regular intervals. Pemphigus Vulgaris and other rare variants of the disease as well as systemic lupus erythematosus respond less well to therapy. If the disease progresses and severely restricts the quality of life, the affected dogs must be euthanized. Since pemphigus is a rare disease, no reliable predictions can be made here. Experts estimate that around one in ten dogs suffering from pemphigus is euthanized because of the disease.

Do Homeopathy And Home Remedies Help With Pemphigus?

As is often the case, there are no studies on whether homeopathy will help dogs suffering from pemphigus. However, there are individual dog owners who have had positive experiences with visiting an animal health practitioner. It is advisable not to give globules on suspicion, but to go to an experienced animal health practitioner and have the dog thoroughly examined. Because a thorough medical history is essential. Only carry out homeopathic therapy in consultation with the treating veterinarian. This also applies to herbal remedies.

Whether with conventional medicine or with the additional help of an alternative practitioner: The therapy of autoimmune diseases requires a lot of patience. What else can animal lovers do against pemphigus in dogs? Four-legged friends with diseases of the immune system particularly benefit from high-quality food, little stress, and a lot of exercises. But be careful: Too many sun rays can cause the disease to progress. Go for a walk in the shady forest in summer.

Pemphigus in Dogs in Brief

Experts define the various forms of pemphigus according to the affected cell layer.