The fish, which will be discussed in the article, in many countries is called “stinging catfish” (Stinging catfish). He received this name for the thorny spines of the dorsal and pectoral fins, at the base of which glands with poison are located. If the poison enters the wound inflicted by the thorns, then the person feels a burning pain. Despite this, it is quite common to find it in hobbyist aquariums. This fish is a Sackville catfish.

Sacred gill catfish (Heteropneustes Fossils) is a large bottom fish that can grow up to 35 cm in length in a suitable volume. The species received its name for the paired auxiliary respiratory organs – cylindrical bags located along the body from the gills to the tail. Some researchers believe that they are filled with air, which the fish use when needed, while others believe that there is water inside the bags that moisturizes the gills. Together with a large amount of mucus secreted by the skin of fish, this device allows them to do without water for up to several hours.

The venom of Sackville catfish is not toxic to humans, but painful and resembles a bee sting. However, people prone to allergies should be on the lookout, as catfish poison can cause a serious allergic reaction. Therefore, any manipulations in the aquarium must be carried out observing safety precautions. If the fish are pulled to the surface, you can sometimes hear a characteristic squeak. 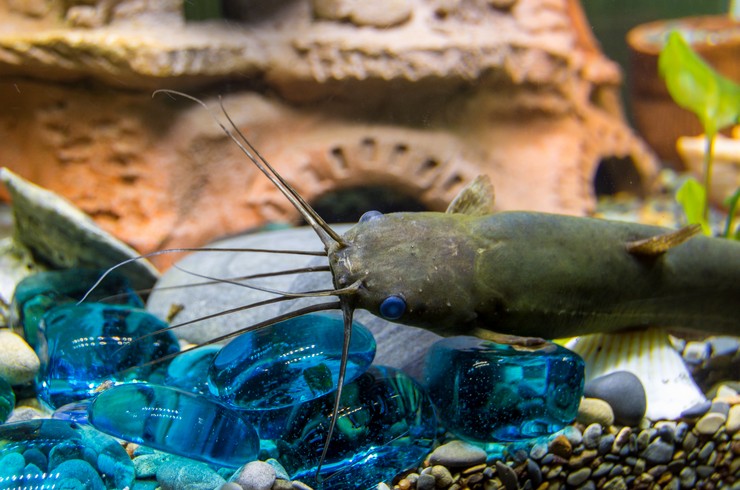 The head is small with small eyes and a slit-like mouth, around which there are four pairs of long whiskers: two under the upper jaw, one under the lower jaw, and one near the nostrils.

The color of Sackville catfish is very diverse: brown, gray, and even almost black. There are albino forms.

The natural habitat of the sack gill catfish includes practically the whole of Southeast Asia. Fish inhabit the waters of Myanmar, Vietnam, Laos, Pakistan, eastern India, and the island of Sri Lanka.

They live in slow-flowing rivers with low oxygen content. To adapt to such conditions, additional respiratory organs have developed. They keep mainly near the bottom of the reservoir and periodically float to the surface to swallow a portion of air. If the fish is deprived of this opportunity, it quickly dies. If the reservoir dries up, the sack-gill catfish can stay on land for several hours, which allows it to move to more suitable conditions. The fish can often be found in brackish waters.

The local population does not like this fish because of the dangerous poisonous thorns. If the catfish gets caught in the net, fishermen prefer to cut it together with a part of the net, avoiding direct contact.

Sacred gill catfish is a very hardy fish that will require a minimum of care when kept at home. The volume of the aquarium should be 100 liters or more. The container must be covered with a lid because the catfish can jump to the floor. The soil is shallow, laid in a layer of at least 2 cm. A large number of stones, snags, and caves must be installed at the bottom so that the catfish can hide in the daytime. The covers of baggy catfish are sensitive; the presence of decorations and ground with sharp edges in the aquarium is undesirable. 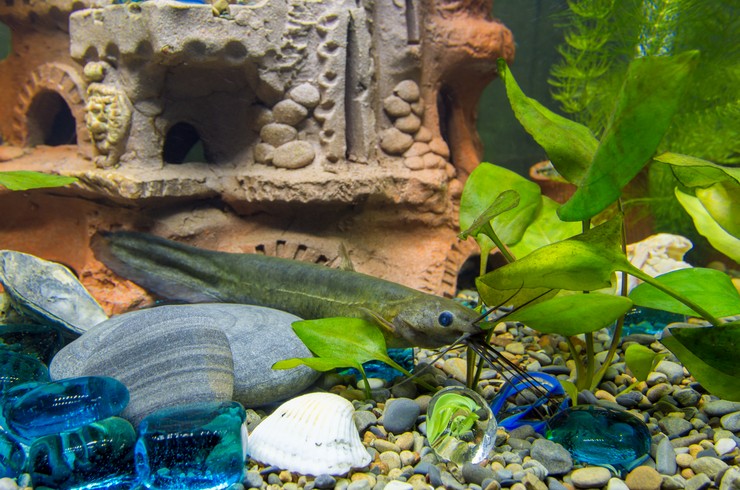 Catfish prefer dim lighting. In the aquarium, you need to organize effective filtration and aeration. It is also necessary to leave a layer of air between the surface of the water and the lid so that the catfish can swallow air.

The catfish does not show any interest in plants, so groups of thickets can be created as another option for natural shelters. The lifespan of the baggy catfish in the aquarium is up to 12 years. 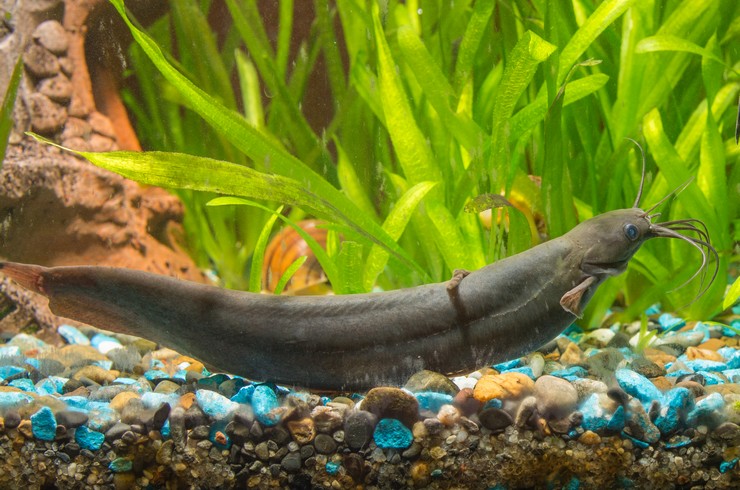 The sack gill catfish is a typical nocturnal lone predator. Therefore, it is possible to keep the fish only with species that will not fit into his mouth; small inhabitants of the aquarium will become live food for the catfish. For the same reason, shrimp and shellfish will be unsuccessful neighbors. In an aquarium of a suitable size, you can keep several individuals of the Cargill catfish. Fish show aggression only if they are attacked. Clashes over territory are very rare. Cichlids, large barbs, and gourami, polymers, iris will become good roommates.

Feeding baggily catfish in an aquarium is easy. They are omnivorous and happily eat any type of dry food. But since they prefer to eat at the bottom, it is best to opt for feed that quickly sinks to the bottom. Considering the size of the mouth, Tetra Tablets TabiMin or Tetra WaferMix tablets are well suited for all bottom fish species. Immediately sinking to the bottom and keeping their shape, they are available for eating by sack-gill catfish for a long time. All Tetra foods are fully balanced and fully digestible to minimize waste. This is very important for fish of this size because the water stays clean longer.

It is best to feed the fish in the evening, after turning off the lights in the aquarium. Baggill catfish are prone to overeating, so once a week it is necessary to arrange a fasting day for them.

Puberty occurs in sack gill catfish at the age of 1.5-2 years. Sexual dimorphism is not expressed, females are slightly fatter than males. During spawning, fish can change color – from monochromatic it becomes spotty. Unfortunately, natural reproduction of fish in the aquarium is not possible, the necessary pituitary injections.

A spawning aquarium should be at least 100 liters in volume. A separator mesh, covered with small-leaved plants, and several shelters are laid at the bottom. Spawning is stimulated by a gradual increase in water temperature to 27-29 ° C. The acidity of the water is neutral, the carbonate hardness is not higher than 10 °.

Manufacturers do not build nests for caviar, it is deposited right at the bottom. At one time, the female can sweep away up to 500 eggs. After that, the parents must be planted, and in the spawning aquarium, a quarter of the water must be changed. The incubation of eggs is fast, within a day the larvae hatch, which switches to independent feeding after 3-4 days. The fry bear little resemblance to adults: they have a disproportionately large head. Additional respiratory organs – pulmonary sacs – do not appear immediately, so it is important that in the first days of life the water level is no more than 20 cm. Young catfish grow unevenly, regular sorting is necessary so that large individuals do not eat small fellows. 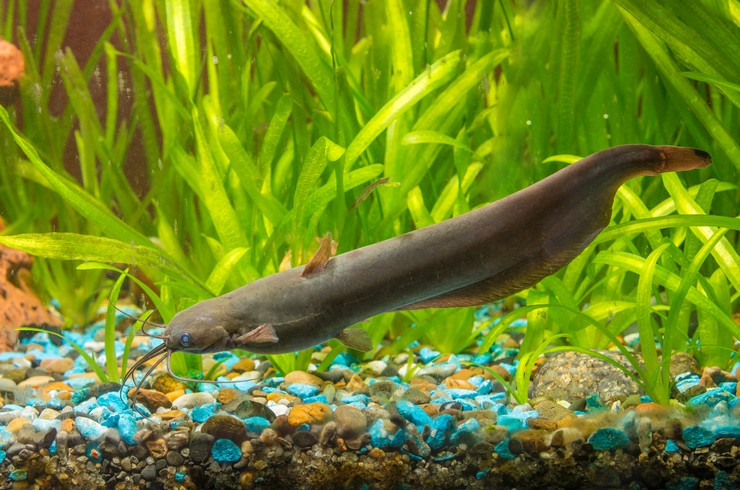