In addition to physics nerds, Schrodinger’s cat is also known to some series fans. We explain the role a cat plays around one of the most famous controversies in modern physics.

Laws of Nature in the Macro and Microcosm

What is Schrodinger’s cat all about? It is an experiment that deals with the different physical laws for the micro-and macrocosm.

Let us first look around in the macrocosm. This means everything that we can see with the naked eye: At first glance, all living beings and objects in our everyday life are always in one place and have specific values. For example, despite its magical name, the cat Merlin cannot lie on the sofa and in the cozy bed at the same time. He cannot weigh four and five kilograms at the same time.

But these rules do not apply to the microcosm and thus to what quantum theory describes. Quantum theory is about the smallest particles such as atoms or electrons. However, according to the principles of quantum theory, these can be in several places at the same time and have different properties. For example, an atom can decay and not decay at the same time. Quantum physicists refer to this state as “coherent superposition”. 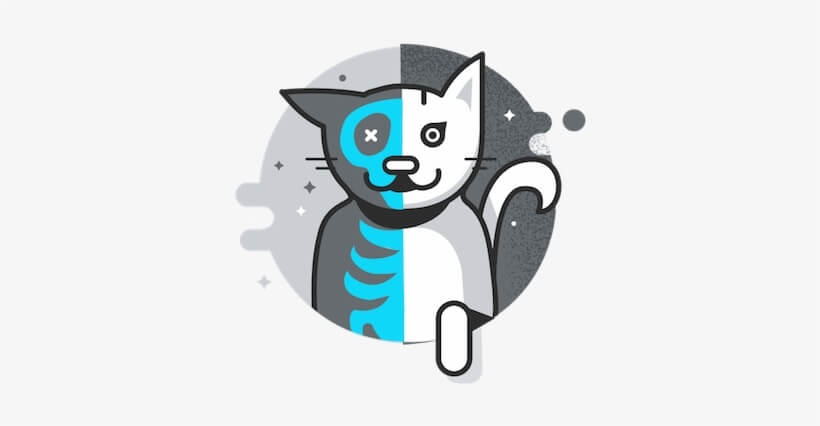 Sounds strange? This is exactly what the Austrian Nobel Prize winner and physicist Erwin Schrodinger wanted to make clear. In 1935 he invented a thought experiment that takes the different laws in the macro and microcosm to extremes.

Decades before the trend of viral cardboard videos with fur noses, Schrodinger put a cat alive in a box.

This made him world-famous. To reassure concerned cat fans: Schrodinger’s cat was purely fictional – neither it nor the box existed. Schrodinger describes his experimental setup as follows.

A radioactive atom, a Geiger counter, a hammer connected to it, a jar of poison, and of course a cat is in a closed box. When the radioactive atom decays, the Geiger counter shows it and activates the hammer, which destroys the glass with poison. So the poison leaks out and causes the cat to be dead as soon as the atom disintegrates. However, it is unclear whether and when the atom will decay. However, according to the rules of quantum mechanics, the atom is in said coherent superposition while we are not observing it. Experts speak of “superposition”: it has neither disintegrated nor non-disintegrated.

For “Schrodinger’s cat” this means when the box is closed and according to the laws of quantum physics: It is neither dead nor alive.

Only when we open the box do we see either a dead or a living cat.

What Does Schrodinger Want to Tell Us About His Cat?

So far – so confusing. At least for the layman. With the fictitious experimental setup, Schrödinger wanted to show the conflict between natural laws from the macrocosm and the microcosm. Because a cat is not a quantum object, it cannot be dead and alive at the same time – even if its condition depends on a quantum object. The laws of the macrocosm clearly regulate that the cat must be either dead or alive at all times. However, if you dive deeper into the world of physics, new dimensions open up based on the thought experiment of Schrodinger’s cat. For example the “many-worlds theory”. It says that both possible states become real: the cat dies, the cat stays alive. But these two realities take place in different universes. The result would be countless parallel universes.

Schrodinger’s cat gives those interested a lot to ponder. With it, however, relaxation is also possible: If you don’t want to immerse yourself in quantum physics, you can sit comfortably on the sofa and spend time with Schrodinger’s cat. The icing on the cake is of course your own cat on your lap! Schrodinger’s cat offers a few steep templates to make you smile. In one episode of the sitcom The Big Bang Theory, physicist Sheldon Lee Cooper tries to help his neighbor with Schrodinger’s thought experiment on relationship issues.

Other series such as Doctor Who and Futurama, PC games such as World of Warcraft, and famous authors such as Douglas Adams and Terry Pratchett also allude to what is arguably the most famous cat in science.