A healthy little foal – that is the dream of many horse owners. But whether you are now considering having your mare inseminated or you have already done so: There are a few things to consider when a horse is pregnant. We will therefore explain to you how pregnancy basically works and which factors you should carefully observe at which stage so that a healthy foal is born. The focus will be particularly on feeding. Read more here!

Gestation in the Mares: This is How It Works 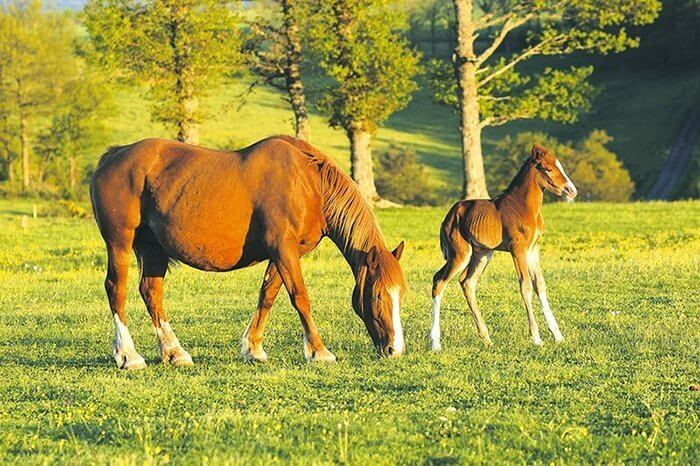 Horses have a relatively long gestation period. Overall, they are an average of 11 months pregnant, with the exact time varying between 320 and 355 days, depending on the breed, age, and condition of the mare. In these 11 months, the embryo matures and develops into a foal. We have summarized what to expect at each stage here:

If you discover that the horse is pregnant, it is best to contact your veterinarian. Because unfortunately the animals are relatively susceptible to abortion and this can take place at any stage. In order to prevent this as much as possible, correct husbandry and feeding are essential – but more on that in a moment.

Recognize Pregnancy in the Mare

From the outside you can recognize the pregnancy in the horse at the earliest after half of the time has already passed – after all, only then does the sagging stage begin and the stomach begins to bulge significantly. If, as is usual in most breeding farms, it is a planned pregnancy, you can, however, check with early examinations whether the mare is pregnant.

There are various options available to you for this. The safest is the PSMG determination in the blood, but this is only possible from the 40th day. A rectal check from the 18th day and an ultrasound examination from the 15th day (97% certainty) can provide information beforehand. From the 120th day of pregnancy onwards, this can be determined using a urine test or an estrogen test.

What may sound like a lot of examinations at first, but makes perfect sense. Because we already mentioned above: In horses, embryonic losses are more common than in many other animal species. Incidentally, these can have a wide variety of causes. We have put together a first overview here:

The Food for Pregnant Mares

While you cannot influence many of the biological factors or can only influence them to a limited extent, feeding during pregnancy is an area in which you can give your animal-specific support. The administration of various supplementary foods always depends on the stage of pregnancy. We want to take a closer look at this.

The Best Conditions: Feed Before and at the Beginning of Pregnancy

Before you even breed the mare, you should check very carefully what her state of health is. This also includes weight. This should be around 6 on the Body Condition Score scale. If, on the other hand, the horse is too fat or too thin, for example, menstrual cycle disorders occur more frequently, which can lead to an abortion. What you should pay attention to in general, we have recorded in our article on the amount of feed.

Do these disorders occur even though your horse appears to have the ideal conditions for pregnancy? Then the administration of monk’s pepper may be useful. Because this can have a positive effect on the hormonal balance and bring it into balance. In addition, vitamin A and carotene can have a positive influence on the fertility of the mare.

If you have now determined that your mare is in foal, that does not immediately mean that you have to change the feed. On the contrary: Basically, it is enough if you continue until the 7th month as if everything were the same. Only the feed ration needs to be adjusted accordingly so that the horse has enough strength to feed the growing foal. In addition, make sure that you only give high-quality feed (both hay and minerals). 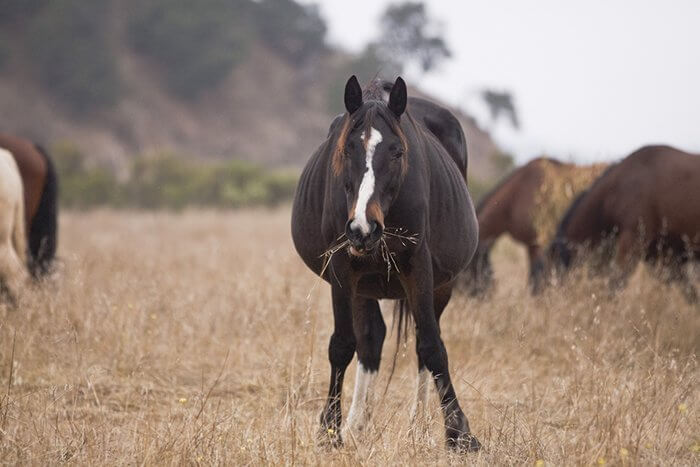 At the eighth month, the mare is considered to be very pregnant. Now it is time to adjust the feed according to the new needs. Because, as described above, the foal is only now beginning to really grow. In addition to the energy requirement, the demand for minerals and trace elements is now also increasing. It is said that the maintenance requirement values increase by 1.75 times. Specifically, the following content supports the respective tasks:

In order to meet these needs, a special supplementary feed is usually recommended, which is tailored to pregnant mares. The addition of mash, haycobs, and flaxseed is a useful addition and can contribute to the overall health of the horse.

Pregnancy in the Mare: Better to Do Without It

In addition to the useful supplementary foods, there are also some that you should avoid. These are usually not necessarily optimal in everyday life, but during pregnancy in horses, they can lead to premature termination. At the forefront are frozen forage (including grass and carrots) and mold-infested hay or straw.

You should also avoid haylage and silage. Because these have a higher germ content, which can also have a negative effect on pregnancy and the unborn animal. Last but not least, it makes sense to protect your mare from the ingestion of soil. That doesn’t mean you have to constantly monitor them as they graze, just that you should check the rest of the forage for contamination.

By the way: You should also be careful when feeding iodine. If the pregnant mare is oversupplied with it, this can have drastic consequences for the foal. This can lead to goiter formation or deformity of the limbs.

Pregnancy in Mare: What Else You Should Pay Attention to

In addition to feeding, we advise you to keep an eye on other factors that are also beneficial for the birth of a healthy foal. The most important? The mare should feel good. Stress is – unfortunately in this case literally – fatal. For you, this means that it is best to establish a place in a permanent herd group before pregnancy.

While the mare should take in the maximum amount of sunlight and as much fresh air as possible is conducive to pregnancy, a place of retreat is just as important. Whether it’s a solid box or a shelter: Both should be littered with sufficient litter and kept dry. It is also important to avoid sharp edges, as the size of the animal will increase significantly in the next few months.

In addition to the attitude, the care of the pregnant mare is also important. The person is the reference person here. Give your pet some reassurance, ideally by dealing with him on a daily basis. This can be an extensive care unit (be careful with the belly from the eighth month), but also a walk or a ride or a ride at the beginning. By the way: The latter is possible until the saddle no longer fits (usually from the end of the sagging stage). Even then you can still ride gently at a step and without a saddle.