The Welsh Pony is a group of four closely related horse breeds, including ponies and cobs. It is believed that these animals have lived in the hills of Wales since 1600 BC. The complexity of the biotope, the scarce food base, and the harsh climate led to the emergence of very strong, healthy, and hardy ponies.

There are many references to Welsh ponies in medieval literature. According to the description, it was a horse “fast-footed, good jumper, good swimmer, and capable of carrying significant weight on its back.” Dark times for Welsh ponies came when Henry VIII (in 1535) issued a decree ordering the destruction of all stallions below 152 cm and mares below 132 cm. During this hunt, only a few herds of Welsh ponies, hiding in desert uninhabited lands, managed to survive. There, undersized wild horses lived and bred. In 1566, this law was partially repealed by Queen Elizabeth I on the grounds that large horses seriously damaged the soil cover of the islands.

For the next two hundred years, Welsh ponies were used as versatile workhorses in the highlands of the islands and on the border of Scotland. Later, ponies were used in agricultural work and in the army. 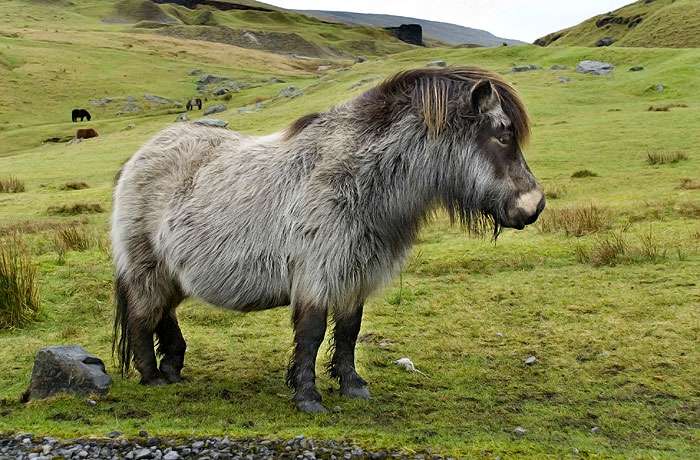 Before the first automobile was invented, the Welsh pony was the fastest mode of transport in Wales. Traders, doctors, and other businessmen often traveled by pony. The fastest of them could cover a distance of 50 km in less than three hours. Until the middle of the 20th century, the British War Office considered the Welsh Cob so valuable that it paid bonuses to the best stallions.

In 1901, the first pedigree book of the breed was opened in England, and in 1907 – in the USA. In the 1980s, the Scottish Department of Agriculture established a stud farm in Skye to improve the breed for agricultural purposes. In 1913 the stud farm was moved to Inverness. Many distinguished ponies emerged from this plant until it closed in December 1977. Following the closure of the main plant, uncontrolled breeding of Welsh ponies began, resulting in various types and sizes. 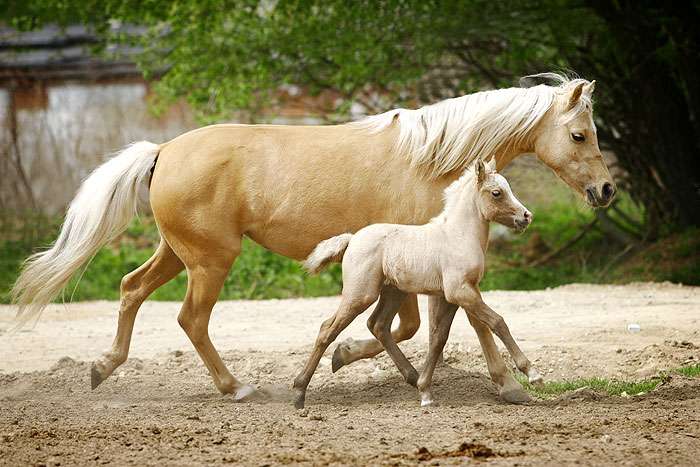 The Welsh Mountain Pony (Section A) is considered by many to be the most beautiful of all ponies. This harmonious pony, very elegant and colorful, resembles a miniature Arabian horse with its nobility and expressive features. Ponies have a playful and lively character, they are smart but sometimes unpredictable. Their step is soft and energetic. The Welsh Mountain Pony is suitable for riding and riding children.

The Welsh mountain pony has a small and light head, pointed towards the end of the nose; large live eyes; small, very mobile ears; open and protruding nostrils; broad forehead; long, curved neck; long shoulder, well angulated; pronounced withers; straight, strong back; the limbs are well-formed, dry and strong; the forearms are long and strong; short legs; round and hard hooves. The movements are graceful, smooth, free. Any color, except piebald. 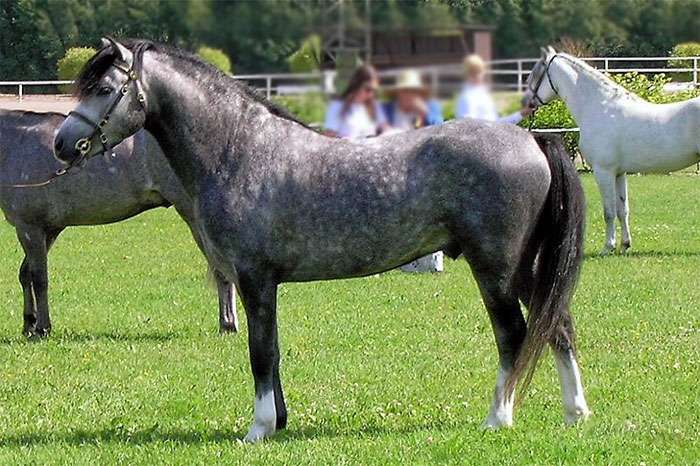 The Welsh Riding Pony (Section B) is a popular sport pony for teenagers. He is very petite, friendly, intelligent, courageous, good-natured, energetic, and cheerful. Suitable for jumping, dressage, competition, and as a recreational pony. Any suits, except piebald. 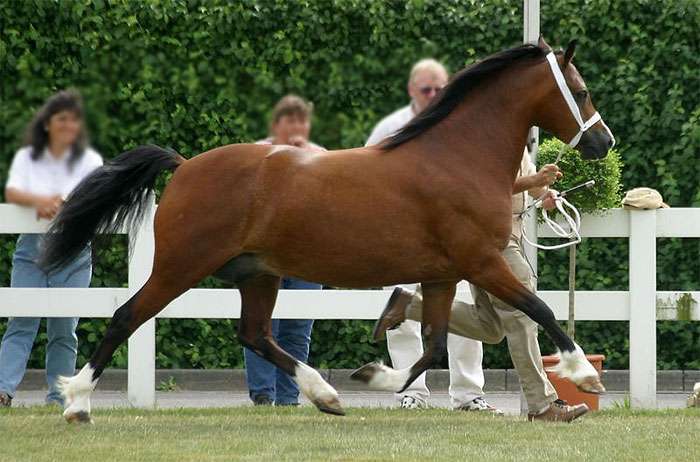 The Welsh Pony Cob (Section C) was previously used for farm work. It is a good riding horse with a graceful, soaring trot. Any color, except piebald. It can carry a load that does not exceed 75 kg.

The Welsh Pony Cob is used for jumping, hunting, trekking, and horse riding. It is a smart, brave, undemanding, and reliable pony. 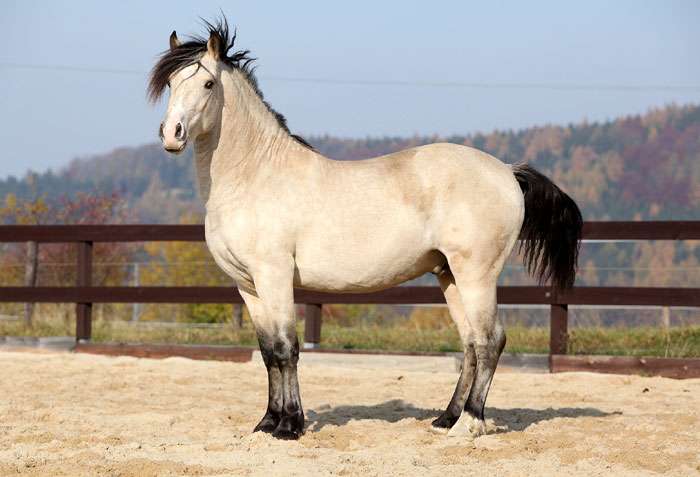 The Welsh Cob (Section D) is a very versatile pony, whether for recreation, hiking, or sports. Courageous, lively, flexible, with excellent health, traditionally used for a variety of hard work on mountain farms, both in harness and under saddle. Cob was a popular war horse (used in the cavalry, for transporting heavy weapons and equipment), mail horse, and worked in coal mines. Today, the Welsh Cob is most commonly used as a riding horse for both adults and children. Horses participate in dressage, in tourism, in sport hunting, in jumping over obstacles, in cross-country races, in-country walks.

It is distinguished by active movements and great endurance, and is also famous for its excellent trot, of course, inherited from the Norfolk roadster. The Welsh Cob, which today is an exception among all British mountain and riding breeds, does not have a certain upper limit of height at the withers, must have all the qualities of a pony, including a quality Welsh pony head.

He has a kind character, so he is a unique pony for children. They are excellent show horses with an innate beautiful ride, balance, and rhythm, which is often used in dressage.

Horses are usually kept in separate stalls in the stable. The stall size must be at least 3x3m. The animal needs to be provided with walking for several hours a day, as well as communication with other horses.
It is best to choose wooden stables, but there are also good ones made of brick. The height of the curtain is 3 m. There must be windows in every stall and good ventilation. Make sure that there are no drafts in the stable that could make the horse sick. There should be walking pens nearby.
In stalls, straw, sawdust, peat are used as bedding. It changes daily.
Your horse’s hooves should be checked regularly and the services of a farrier should be used.

Feeding methods for a horse are very dependent on the work it is doing and the degree of stress, as well as, of course, on the total weight and individual characteristics. The menu is also different. The main diet of the average horse includes hay and oats – as the main food, bran, carrots. Horses need salt, so watch out for that too. It is best to ensure that the animal has constant access to it by putting a lick briquette in a stall or levada.
In the spring and summer, many stables practice grazing in the fields.
Vitamin and mineral supplements, as well as apples, fodder beets, and watermelons as a treat and also vitamins, will be a useful addition to the diet.
Horses can either be fed water through automatic drinkers or given in buckets before each feed. However, in no case should the drinking process be left uncontrolled, since a horse that is hot after work can harm its health by drinking water. First, she needs to cool down, no matter how much she wants to drink.

Only healthy animals are allowed for breeding, without behavioral problems. It is recommended to pair so that the mare is larger than the stallion.
Individuals not younger than 3 years old are allowed for breeding when the horses’ organism is formed.
Mating can take place both naturally (by hand, herd, or brewing method), and artificial. In the first case, the stallion is brought to the mare.
The best time is from mid-March to July for the foal to hatch the next spring or summer when there are enough grass and warmth. It is possible to determine whether a mare is ready for mating by her special posture (widely spaced and slightly bent hind legs, a raised tail, and a lowered head), frequent urination and mucus management, as well as “blinking”.

The Welsh pony is one of the oldest horse breeds. This breed (they were also called Welsh ponies) appeared in North Wales in the 15th century BC. The Romans who came here began to cross the local stunted horses with the eastern horses brought with them. Then, in the 15th century, with the return of the Crusaders to England, the Welsh ponies were given the blood of Arab horses captured during the campaign.

In the 16th century, a decree of King Henry VIII was issued to destroy all stallions below 150 cm and mares below 130, which put the entire breed at risk. And although this law nevertheless caused irreparable damage to her, the breed was saved when Elizabeth I partially canceled the decree, explaining that the poor lands could not support large horses.

Then, in the 18th and 19th centuries, Arabian blood was added to the breed, as well as the Hackne and Norfolk roadster. Welsh ponies became one of the staple horses for carriages at the time due to their stamina, small size, and general availability. In 1902, the Studbook of the Welsh Pony and Cob Society was created, and the official licensing of the breed did not begin until 1918.

Since the Welsh ponies easily adapt to their environment, and from the point of view of work, they are sometimes simply irreplaceable due to their ability to work and excellent qualities, they have spread widely throughout the world, having won universal love. In addition, these horses are unpretentious in care and are considered long-livers.

Despite all this, in 1998, the Pony and Cob Society found out that the breed is under threat of extinction due to its small number. Various breeding programs began to be actively pursued, thanks to which the situation was changed.

Contact, friendly, quick-witted, and energetic horses today become excellent partners for children’s equestrian sports, driving, hunting, various shows, and performances. And, of course, the Welsh pony is a great friend if you just want to spend time enjoying the companionship of your small but sturdy horse and horseback riding through the fields and forests for fun, not sporting achievement.