As the fastest mammal in the world, the cheetah clearly has its nose in front. But the high-performance athletes among dogs are also on the move at great speed. Find out more about the fastest dog in the world – and fellow dogs who are hot on his heels.

Contents hide
1 Born to Run: Greyhounds
2 The Greyhound is the Fastest Breed of Dogs in the World
3 Superlatives and Their Downsides
4 More Fast Dog Breeds
5 See the Fastest Dog in the World Live 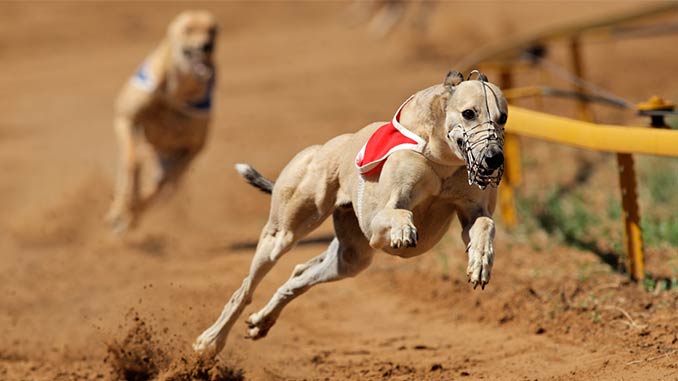 We can already reveal this much: the fastest dog in the world is a greyhound. This won’t surprise dog lovers who have seen a greyhound in action. His sinewy body on high legs is designed for speed – as fast as the wind. The noble-looking animals are available in different versions and sizes.

The origin of many breeds lies in the hunt, the hunt with the falcon. Incidentally, at a speed of up to 389 km / h, the falcon not only leaves all land animals below but also relaxes behind it. He spies the prey in the classic oriental hunt and sets it up. Then the person asks the greyhound – for example an Afghan hound or Saluki – to chase. But the nicest of the greyhounds and thus the fastest dog in the world does not come from the Bedouin people but has British roots.

The Greyhound is the Fastest Breed of Dogs in the World

Big, sinewy, slender, and graceful: the Greyhound reflects the ancient ideal of the greyhound in its physique. But how fast is the fastest dog in the world?

The greyhound can reach a speed of 80 km / h over short distances.

It used to be a hunting dog mainly used to hunt rabbits. However, like some other greyhounds, he is now specifically bred for racing. Greyhounds are considered loving and devoted dogs. They keep quiet in their home when they are busy. The greyhound needs daily free run, which is only advisable in wild-free areas. Because if he sees potential prey, there is almost no stopping him: the hunter is about to sprint!

The breed is available as a variant specially bred for races with a light build. Animals with a heavier build come from the show line. “Showgreys” enjoy coursing a lot. The animals chase after a dummy rabbit on a near-natural race track.

Superlatives and Their Downsides

The fastest, biggest, smallest, smartest – unfortunately, such superlatives always have their downsides for the respective dogs. The largest – like the Irish Wolfhound – only live to be around six years old. For the fastest dog, his successes on the racetracks involve dangers. This is especially true for greyhounds in countries where commercial dog races are allowed – for example, Spain or Portugal.

Unscrupulous breeders and keepers focus on maximum success in races. At the age of two to three years, performance diminishes – the racing dog has had its day. If the dogs do not achieve the desired success on the racetrack, they are killed or abandoned. The lucky ones end up in animal welfare. These are often not purebred greyhounds, but mixes like the Galgo Español-Ingles. A popular crossbreed as the long-distance greyhound runner makes Galgo Español faster.

Whether mixed or pure-bred: the lovable dogs place high demands on their new owners due to their enthusiasm for racing and agitation.

Admittedly, no dog can catch up with a fit cheetah. The big cat is and remains the fastest land animal in the world with a top speed of almost 100 km / h. But besides the greyhound, there are other dog breeds that are fast on the move. The fastest dogs include:

These are only approximate figures – there are faster and slower representatives of the respective races. Speed is also important in the great outdoors: rabbits, as typical prey animals, can reach speeds of almost 60 km / h.

In dog races, different races of greyhounds usually compete in different classes against conspecifics. Using the example of a usual route length of 480 m, the famous Afghan hounds are around a quarter slower than greyhounds.

Sporty dogs like Border Collies and German Shepherds can reach almost 50 km / h over short distances. They easily overtake the fastest person in the world, Usain Bolt, with a maximum speed of 44.72 km / h.

See the Fastest Dog in the World Live

Would you like to see the fast-paced four-legged friends in action? No problem, because there are over 20 dog racing tracks in Germany. Good to know: The events are amateur races. In contrast to countries like Spain or Portugal, betting on victory or defeat is forbidden in Germany – for animal welfare reasons.

The two- and four-legged participants take part in the race mainly for fun. That is why there is also a slower senior class for dogs from six years of age. Veterinarians examine all participating dogs on site. A current overview of dog races in Germany is available, for example, on the dates pages of the German Greyhound Breeding and Racing Association.