The dog is lying on its back, sweeping its tail, paws flickering in the air … In such situations, the reasons for such an animal’s behavior are very different. And the reaction of the owners to it is also very different. So why is the dog behaving so strangely? 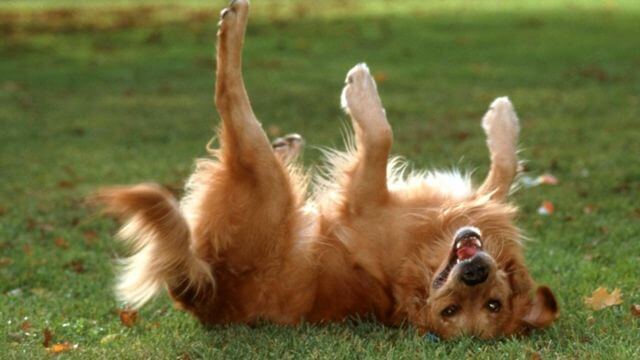 Life is good. The dog is in a good mood and enjoys life. Spinning, spinning, dumping excess energy, at the same time, and scratches the back. Invites the owner to play, lie around, ride, hug with a four-legged friend. When scratching, the belly freezes blissfully with pleasure.

Winter, snow, the dog goes icebreaker through the fluffy snow, dives into a snowdrift, rolls, and somersaults. Here, too, partly a game, partly cleaning a fur coat – such a kind of cleansing snow procedure. It’s a great thing, only you need to make sure that your pet does not get too wet, and if this happened and your dog is an apartment resident, then it is better not to risk it and return home, and then wipe the animal with a towel in order to avoid a cold or something more serious.

The back itches. And the dog is scratching itself with its hind paw … It is imperative to identify the cause of the itching. To do this, you should examine the dog. Maybe your pet has caught fleas somewhere. There are only a few of them so far, but they bite with might and main. This is the most harmless problem – it is enough to treat the animal with special means. The presence of subcutaneous mites will be determined by the veterinarian at the clinic. Fungal diseases, eczema, and other skin diseases in the initial stage are difficult to detect, and you cannot do without a specialist. The sooner you start treatment, the more chances you have to cope with the sore.

We play piggy. Dogs, like humans, are very different. Some are clean, will go around all the puddles, and shake with disgust with their wet paws. Others will gladly flop into the filthiest and dirtiest puddle, and then happily shake themselves off, dousing the owner with a fan of sticky spray. Such is your piggy. Well-developed obedience commands will help. The dog must understand that the owner of the game of piglet is not at all happy.

The owner’s nightmare. A lot of dogs just wallow with delight on a heap of feces or some kind of rotten stuff. The animal can get so dirty that it will have to be washed twice and three times. It is believed that those animals who have a highly developed hunting instinct behave in this way: a dog that has fallen into something strongly smelly masks its own smell, and it is easier for it to sneak up on prey. It doesn’t matter that he only has to hunt for his own bowl – the genes that have preserved the ancient memory tell him that he is doing the right thing. Well, the owner’s concern is to see and stop this disgrace in time.