If the dog drinks noticeably large amounts of water, there may be a serious illness behind it. But even harmless causes can cause dogs to be very thirsty. We explain how you can tell whether your dog is drinking too much, what the unusual drinking behavior may be and when there is a need for action.

How Much Does a Dog Normally Drink? 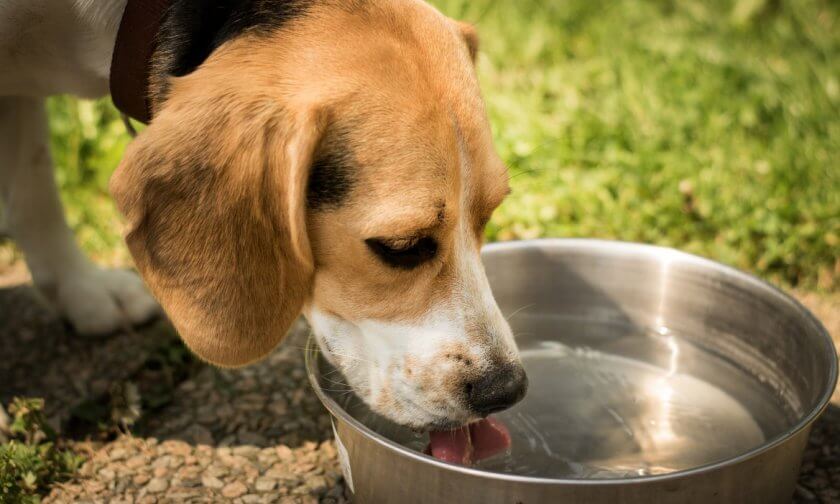 Dogs need fresh water every day to regulate the water balance in the body. How much fluid the dog needs varies and depends on size, weight, and age as well as on the level of activity and diet of the pet.

On average, dogs need around 100 milliliters of water per kilogram of body weight in a day.

For dog owners, however, it is not always clear whether the dog is drinking too little, enough, or even too much water. The first indications of increased thirst are particularly frequent drinking, the targeted search for water, for example drinking from puddles when walking, a constantly empty water bowl, and increased urination.

Great thirst does not always have to have a pathological cause. If you notice changes in your dog’s drinking behavior, first consider whether there could be a harmless reason behind it. Temporarily strong thirst can be quite normal in some cases and often goes away on its own.

Increased drinking is particularly common in the summer months. At high temperatures, dogs need more water to maintain their body temperature and protect the body from overheating. If your dog drinks more in summer, this is quite normal and should regulate itself when the temperatures cool down again. Many dogs are also less hungry in the heat and therefore do not absorb any liquid through the wet food. The fur noses then also compensate for the lack of hunger by drinking more.

Physical activity and exercise lead to a higher need for fluids in dogs. Four-legged friends can cool off with fresh water after running, playing, and after long walks. If your dog has exhausted himself physically, it is safe if he is more thirsty afterward than on quieter days.

The following diseases can be behind increased thirst:

If the dog drinks too much water without any changes in external conditions such as weather, activity, or diet, an illness may be the cause of the changed drinking behavior. Both mild and severe illnesses can be behind the increased thirst of the four-legged friend.

Diabetes is a metabolic disease also known as diabetes. The affected dog’s body is unable to lower blood sugar levels due to a lack of insulin or resistance to insulin. If left untreated, the increased blood sugar will cause fluid to be withdrawn from the dog’s body. As a result, the dog shows symptoms such as an increased urge to urinate, accompanied by a strong thirst and increased water intake.

If the dog drinks too much water, this can be an indication of kidney disease. This is a common disease that manifests itself as impaired kidney function. With renal insufficiency, toxins can no longer be completely filtered out of the blood by the kidneys. To get rid of toxins in the urine, the dog drinks more water and urinates more often.

In the case of kidney disease, it is crucial that the disease is detected early. As the disease progresses, there is an increased accumulation of toxins in the dog’s body. Serious symptoms up to and including the death of the animal are the result. Unfortunately, the disease is often recognized late, as signs such as increased thirst only appear over time.

Urinary tract infections such as cystitis can make dogs thirsty. Due to a bacterial infection, your four-legged friend constantly needs to urinate. The disease affects bitches more often than males and is often associated with pain and behavioral problems. It can happen that the dog eats little or nothing and drinks a lot.

Cushing’s syndrome, also known as Cushing’s disease or hyperadrenocorticism, is also a disease of the kidneys, more precisely the adrenal glands. The disease leads to excessive amounts of the stress hormone cortisol being produced in the dog’s body. Typical symptoms occur, including an increased appetite and weight gain as well as increased thirst. In most cases, Cushing’s syndrome tends to affect smaller dogs.

Other Causes of Increased Thirst in Dogs

Does He/She Have to Go to the Vet?

If you get the impression that your dog is drinking too much water, pay close attention to their drinking behavior first. To get a better overview of the amount you drink, measure the water in the drinking bowl with a measuring cup and note how much your dog drinks per day.

Also, take into account water that the dog drinks in the garden or while walking. If your dog turns out to be drinking too much water, you should see a veterinarian. Even if there are other symptoms, going to the vet is inevitable. Symptoms of illness that are often associated with increased thirst are fatigue, vomiting or diarrhea, panting, tremors, frequent urination, or a lack of appetite.