Diarrhea can occur acutely or chronically in dogs. It is characteristic of a chronic illness that the liquid excrement persists for at least 14 days. In the acute form of watery stool, the excretions appear suddenly.

Contents hide
1 Why Does My Dog Have Diarrhea?
2 Dog Diarrhea: When the Stool Becomes Runny
3 Symptoms of Diarrhea in Dogs: Thirst, Fever, Loss of Appetite, Pain, Weight Loss
4 Small Intestine or Colon Diarrhea? Your Dog Has This Diarrhea
5 Food and Nutrition are the Main Causes of Diarrhea
5.1 Other reasons for liquid feces in dogs include:
5.2 Dog infection diarrhea
5.3 Soft feces from parasites
5.4 Prevention: feed, worming, probiotic and prebiotic
6 Eating in Case of Diarrhea: Fasting and Light Foods
7 How to React Correctly to Dog Diarrhea

Why Does My Dog Have Diarrhea?

If your animal’s feces are completely or partially liquid, it is referred to as diarrhea. Frequent feces can also lead to the addition of mucus or blood. The pulpy/liquid weaning of stool is not an independent clinical picture, but a symptom that can indicate a disease or is idiopathic. Idiopathic means that there is no apparent cause for diarrhea.

When your pet has diarrhea, it is not only exhausting but also very thirsty. Because of the water loss that comes with frequent droppings, your dog needs a lot of freshwaters. Sometimes the liquid stool is accompanied by vomiting because the gastrointestinal tract can be very irritated.

Depending on the cause of diarrhea, a fever is possible in the dog. The normal temperature of the four-legged friends is between 37 and 39 degrees. If the clinical thermometer reaches a value between 39 and 40 degrees, it is referred to as an increased temperature. Values ​​above 40 degrees are considered a fever. The increased body temperature indicates that the dog is fighting against the pathogen causing diarrhea, which is why a high temperature should not be interpreted negatively.

In animals with gastrointestinal complaints, you will often hear intestinal noises that indicate increased activity of the intestinal and gastrointestinal tract. If your dog shows loss of appetite and restlessness, this can be due to the severe abdominal pain that usually accompanies diarrhea.

If your dog loves to be petted on the belly, it may not like this with liquid feces. Stroking the abdomen can increase the pain so that the dog feels the touch as uncomfortable.

With chronic diarrhea, the dog not only loses a lot of water but also loses weight. Since the usual feed is not digested and the animal cannot absorb the nutrients, it becomes emaciated. Severe weight loss can therefore be the symptom of protracted diarrhea.

Small Intestine or Colon Diarrhea? Your Dog Has This Diarrhea

There is not only the distinction between chronic and acute diarrhea but also between the colon and small intestinal diarrhea. Both types of diarrhea differ in their symptoms. You can find out for yourself what type of diarrhea your animal is suffering from.

If your animal’s feces are bloody or slimy, this indicates colon diarrhea. If the rectum is also affected, this can lead to a painful urge to evacuate stool and urine. If you see your animal trying to pass feces/urine without success, it is likely a sign of a rectal problem.

Food and Nutrition are the Main Causes of Diarrhea 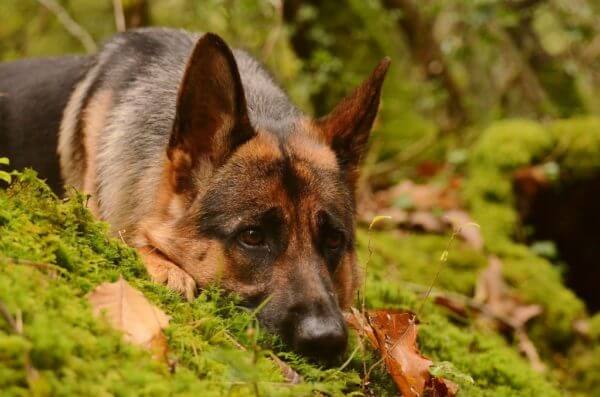 One of the most common reasons for diarrhea is a change in diet. New food is not always tolerated, which is why there is a physical reaction. Sometimes diarrhea develops because the food has been changed too quickly. If you adopt your dog’s eating, it is best to do this in several small steps: Mix the old wet or dry food with the new product and gradually get your pet used to the changed food.

A physical reaction can also occur as a result of the consumption of inferior or incorrect food. For example, feeding your older dog puppy food can lead to diarrhea.

If your dog suffers from food intolerances and eats what he cannot tolerate, the gastric mucosa is stressed. As a result, inflammation of the stomach lining can develop, which also causes other symptoms such as vomiting, blood in the stool, and loss of appetite.

Other reasons for liquid feces in dogs include:

Many people think gastritis is not contagious. However, there are forms of gastric mucosal inflammation that are caused by bacteria or viruses and can therefore be highly contagious.

If you have taken over your new roommate from an animal welfare organization, you should have them checked by the vet upon arrival. In addition to refreshing all vaccinations, it is also important that the animal is checked for parasites.

Giardia (single-celled small intestine parasites) often lead to the occurrence of diarrhea, which is why it makes sense to have the animal tested for single-celled organisms. The parasites are dangerous not only to animals but also to humans, cats, and other pets. Puppies are particularly at risk from the small intestine parasites because the immune system of the young dogs is not yet strong enough to cope with the unicellular organisms. If the Giardia is not discovered early enough, this can be fatal.

If you want to reduce the risk of your pet getting diarrhea, feed the dog small portions of food. By giving smaller portions of food you reduce the strain on the gastrointestinal tract and therefore the occurrence of diarrhea. It is also advisable to leave food from the refrigerator outside for a while and to serve it at room temperature. Also, avoid giving new types of food or treats and instead choose a single type of snack and foods.

Go for a walk with your four-legged friend, make sure that the animal does not sniff at the feces. Not only smelling excrement but also eating it can lead to infection with parasites, bacteria, and viruses. Also, avoid your dog eating rubbish, as it can contain toxic, spoiled, or incompatible substances.

Carry out worming regularly, because these prevent the colonization of roundworms, tapeworms, and roundworms, for example. These worms are mainly located in the intestines and often lead to soft to liquid droppings.

If you want to strengthen your dog’s intestines, give them a probiotic and a prebiotic. Useful microorganisms that support the function of the intestine and therefore keep it healthy are called probiotics. The food of the “good bacteria” is called a prebiotic, which is available for animals and humans and maintains a healthy intestine.

Eating in Case of Diarrhea: Fasting and Light Foods

If your four-legged friend has diarrhea, make sure that the gastrointestinal tract is not stressed during this time. For this reason, a day of fasting is recommended, because your dog’s intestines will recover during this gentle period of time. Note that fasting longer than two days is not recommended. It can have a damaging effect on the intestinal walls. The minimum time for fasting should be twelve hours so that the irritated mucous membrane can slowly calm down.

After your pet has fasted, gradually build up its food intake. Do not serve your dog wet or dry food straight away, but rather:

If your pet doesn’t like rice, oatmeal is an easily digestible alternative. Mix the flakes with cooked carrots, which have a regulating effect on the water balance. If your dog doesn’t like carrots, use grated apples instead.

How to React Correctly to Dog Diarrhea

Diarrhea can have harmless or alarming causes. This is why it is important to show the right response to protect the dog’s health and life.