This is not aggressive but also does not show interest in strangers, has a calm disposition. Since ancient times, these animals have played not only a hunting role but also a protective one. It is these features that are appreciated by owners today. This is a reliable, loyal domestic dog that recognizes its owner as a leader. She is wary of strangers, but not hostile, without aggression.

Ridgebacks are both loyal and independent. This independence sometimes turns into stubbornness. Everyone who has dealt with this breed notes its majesty and intelligence. The dog has a rather strong voice but rarely uses it. Her barking always sounds like a warning if a stranger appears in the house. When the owner is calm, complacent with the guests, the dog understands these emotions and behaves accordingly.

Dogs are supportive of children, accept them as leaders, do not lose their temper, pestered by the child: they would rather leave than show dissatisfaction.

This breed lends itself well to training, dogs like to participate in competitions, run well. Young animals are active but have matured, they gravitate towards comfort, preferring to play games calmly reclining on a sofa, armchair, or rug. Although, like any dogs, they need to be constantly occupied with something and something to train. All commands the dogs follow willingly.

Long walks are beneficial for the animals. In the fresh air, especially outside the city, they are active. In hunting, this is a rather brave, dexterous, and intelligent dog. This breed was bred to hunt a lion, but not in order to take the animal, but to keep it at a safe distance. Dogs have enough courage, intelligence, ability to make their own decisions, so as not to pounce on a predator, and in danger of remaining alive. Agility and maneuverability help this dog. 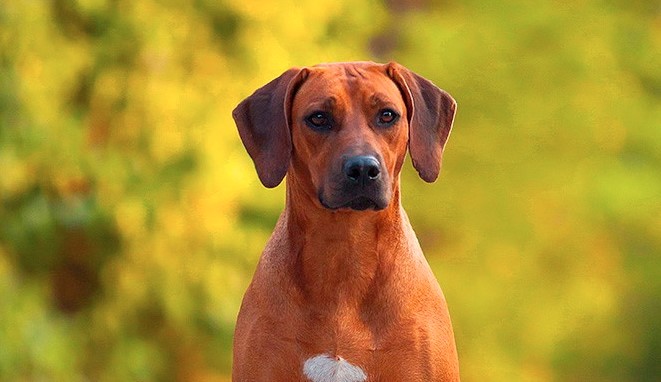 Ridgebacks rely on their sense of smell and sight to hunt. They are considered specialists in the blood trail and can locate a wounded animal at a great distance.