Airedale is a versatile breed, dogs combine all the qualities necessary for a hunter, guard, and companion, they are energetic, curious, intelligent, and moderately angry. They feel great in the forest, in the meadows, in the swamp, and in the mountains, in heat and cold. Airedales are full-fledged service dogs and loyal companions. But their scope is not limited to this. During the First World War, they served as messengers, delivered mail, found the wounded on the battlefield, and brought them medicine. In a relatively short period of their existence, they have successfully proved their importance and won the hearts of fans. 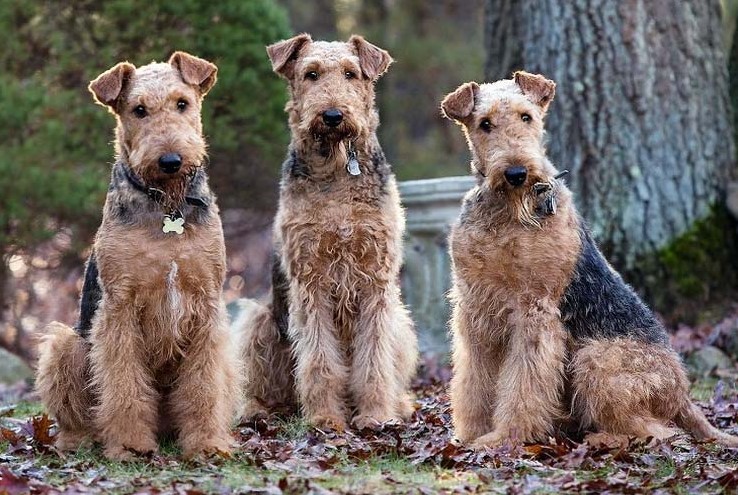 Airedale Terriers were bred in the UK relatively recently. The reason for the creation of the breed was the need for a hunter who could be used for baiting otters. The dog must be hardy, energetic, intelligent, and loyal with a pronounced hunting passion.

To create a new breed, it was decided to cross an Otterhound – and a Black and Tan Terrier. Other dogs also took part in the selection, but almost no information about them has survived. In 1873, the first Airedale Terriers were registered in the Kennel Club of England studbook. By the end of the 19th century, the first standard was developed and adopted. The breed continued to improve on the exterior, working qualities and by the beginning of the 20th century, they made the dogs more compact with an established color. 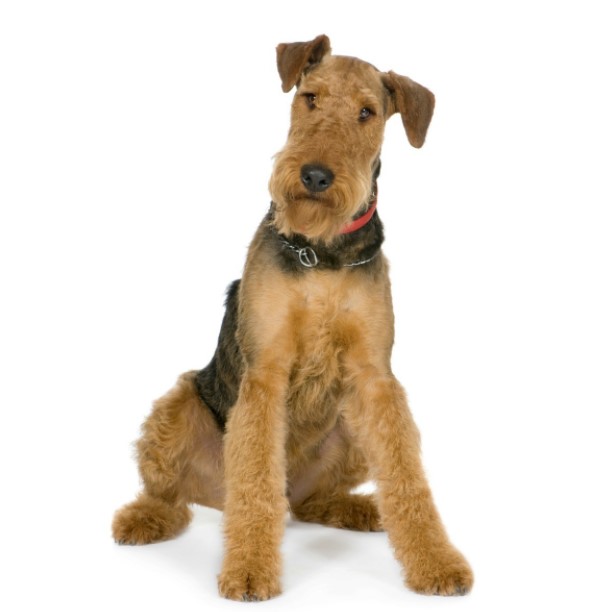 The Airedale is an active, muscular medium-sized dog. Mouth – 58-62 cm, weight – 20-27 kg. The head is proportional, slightly elongated. The border of the forehead and bridge of the nose is smoothed. The nose is black. The lips fit tightly. Scissor bite, but the pincer bite is also allowed. The eyes are small, oval, or triangular in shape, set slightly obliquely, dark in color. The ears are triangular in shape and hang from the cartilage. The neck is of medium length, lean and muscular.

The nape line stands out beautifully. The back is straight. The croup is almost horizontal. The tail is set high and straight. It can be docked by 2/3 of the length, then in the rack, it is almost vertical. The chest is moderately broad and deep. The belly is tucked up. The limbs are parallel, straight, close to each other. Dewclaws are recommended to be removed at an early age.

The coat is dense, coarse, slightly wavy, and snug against the skin. The undercoat is soft, short. On the face, the decorating hair forms a beard and mustache. The color is black-backed – the main background is red, black or streaked spots are scattered on it. White loose hairs on the chest and between the toes are allowed. Ears, back, and neck should be more saturated in color. 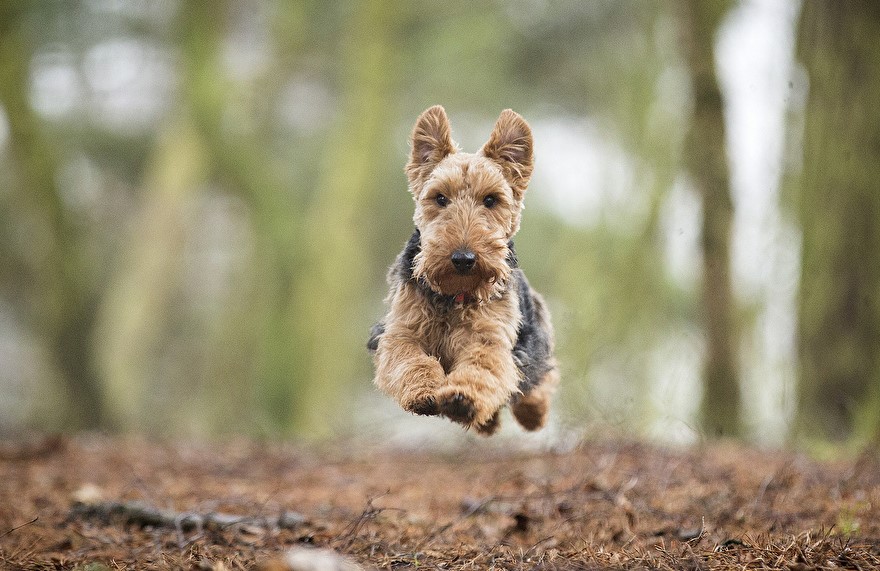 The Airedale is a confident, intelligent, courageous, and friendly dog. He is always in impatient anticipation and, regardless of the circumstances, does not lose his vigilance. Airedale is not aggressive, but if necessary, he will show all his fearlessness. Dogs of this breed are energetic and agile with a lively temperament, curious, and attentive. At times they are very stubborn and independent.

Airedale Terriers are emotional and sociable, self-confident. They are sensitive to the mood of the owner, at the same time, their mood is easy to guess by the expression of the eyes, the position of the tail, and ears. The Airedale is very energetic and curious, they are interested in everything: birds, passers-by, their bags, other dogs, everything that lies on the ground and is in the air. At the same time, they are very intelligent, patient, and loving. Of course, there are more cunning specimens, but against the background of all the positive qualities of their pranks, they look rather funny.

Airedale Terriers require purposeful upbringing, if in the process of growing up a puppy you treat upbringing with sleeves down, a cunning dog will most likely grow out of a baby with which problems will arise both at home and on the street. It is very important to teach the Airedale to behave with small dogs from an early age. Like true hunters, they often grab them as prey. 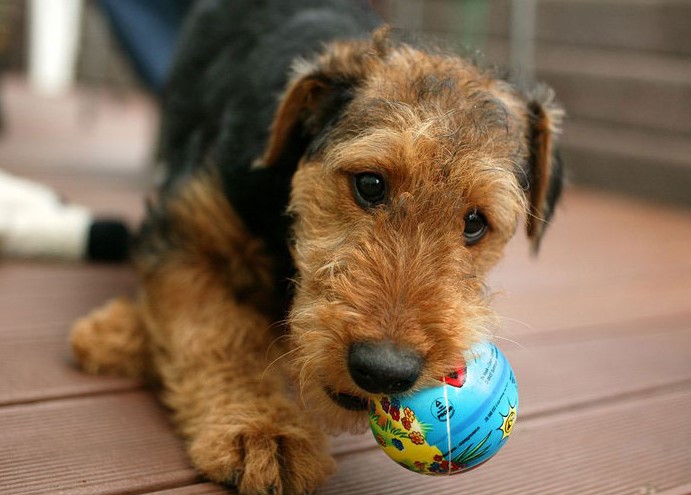 Unpretentious Airedale Terriers are suitable both for keeping in an apartment and in a private house. Those who are going to keep a dog in the yard should give it a place where they can dig holes, as this is one of their favorite activities. Airedale is great for city life and gets along well in an apartment. He is absolutely not intrusive, knows how to be invisible, the dog’s coat sheds weakly, and has practically no smell.

The Airedale is undemanding to food. The basis of the diet can be dry food or organic food. After feeding, it is recommended to wipe the dog’s beard so that food debris does not accumulate in the coat.

To keep your dog comfortable and looking well-groomed, it needs to be brushed regularly. The specific smell is not typical for the breed. Airedale is trimmed at least twice a year, usually in autumn and spring. Trimming is the plucking of dead hairs all over the coat or only in certain areas. Show dogs are trimmed almost all year round. The mustache and beard are only slightly trimmed, left in their natural length, which allows you to emphasize the characteristic features of the breed. The dog’s ears and teeth are examined regularly. Ears are cleaned as needed, and teeth at least once a week. With sufficient physical exertion, the claws usually grind off by themselves, if this does not happen, they must be cut off. 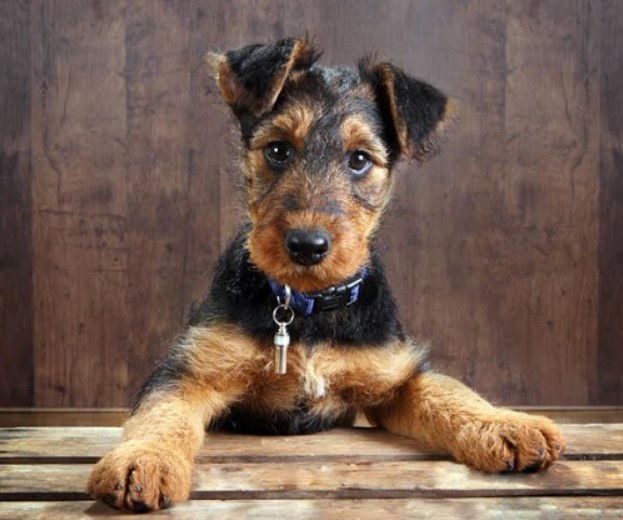 The Airedale is usually a healthy breed; representatives are distinguished by endurance and good health. Among congenital defects and hereditary diseases, the following can be distinguished:

The average life expectancy is 12-13 years. 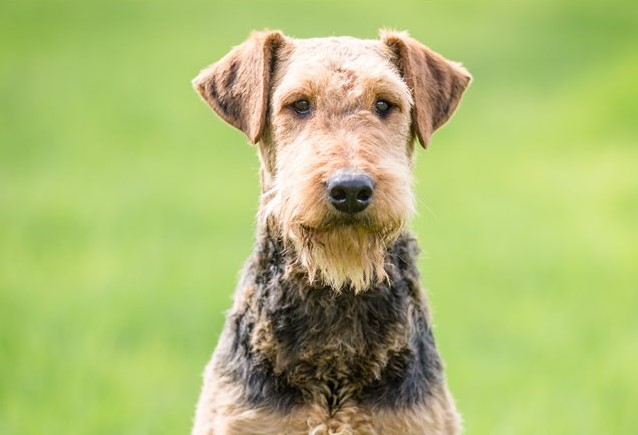 A dog of this breed has a high level of intelligence. The dog is energetic and mobile. Airedale Terriers love to play and have fun, they are brave and capable of heroic deeds. Having bought such a puppy, you will never regret choosing. But you need to educate your pet carefully. It is important not to raise your voice to the dog, but at the same time not to give slack. The dog should feel that the owner dominates her. This pet gets along well with all owners and makes friends with pets. The dog loves walks and space. Needs early socialization and training in important commands due to the hunting instinct inherent in all Airedale Terriers.