Speaking about the danger of a dog, it is worth emphasizing right away that the dog itself (any) is not so much dangerous as its owner can be. What does this expression mean and where did the Bull Terrier notoriety come from? 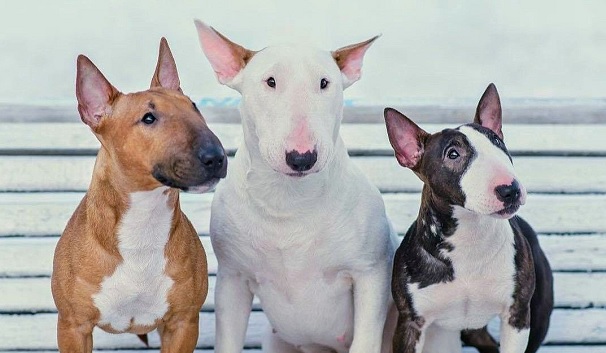 Prejudices about the particular aggressiveness of the breed are far from groundless. Dobermans and Rottweilers no longer scare anyone, and then a breed comes to the aid of formidable businessmen, which frightens with only one appearance – the Bull Terrier. The demand for dogs of this breed was so great that there were stories about Afghan rats (of some unrealistic size), which were specially raised and sold under the guise of bull terriers. Of course, this is just a horror story, however, the more severe the rumors around the breed, the more the demand for it grew.

The dogs were trained to guard, aggressive, merciless. 2-3 English Bull Terriers could easily deal with a group of several people. A very high pain threshold, inherent in all fighters, took a special place in the characteristics influencing the demand for the breed. Even after several shots from a firearm, which did not lead to instant death, the dog will continue to mercilessly squeeze some part of the enemy’s body in its jaws, bleeding.

Another feature that seems to be an element of the “animal” nature is that during the fight the bull terriers lose contact with the owner and, sensing blood, can no longer stop. In fact, everything is simpler and has nothing to do with the psyche of a dog – it’s all about physiology. The fighters have a peculiarity of the auditory canal: when they go into a rage, the pressure rises greatly and the dogs drop, hearing practically disappears. In order for the dog to hear, simply hear the command, it must be shouted directly into its ear. There is no “smell of blood and loss of reality from this”, there is high blood pressure and physiology.

Of course, the genes of the fighter and physiological data: a powerful strong jaw with incredibly high pressure, capable of crushing the bones of an adult’s hand into chips, a frightening look, incredible endurance, and a high pain threshold, make an ordinary dog some kind of vicious and potentially aggressive creature.

A dog is just a tool in the hands of a man. As the owner brings up his pet – so he will behave. If the bull terrier was brought up in love, affection, and care, no matter how much you want to take him out of balance, it will be calm like a boa constrictor. This dog is absolutely safe for children, with the right approach to raising both. Like any other fighter, the Bull Terrier allows the kid to do whatever he wants with it: pull the tongue, climb into the mouth, nose, pull the flews and tail. It will endure all this calmly, simply because it can physically. So the high pain threshold came in handy.

When buying a puppy, you should make sure that in the dog’s pedigree, no less than 10 generations before it, none of its direct relatives participated in battles. If so, you can be sure that fighting genes are dormant or completely extinct.