As well as the varied color preferences in human society, the beagle color is controversial among breeders, show dog owners, and experts. Judges who are not experts in the breed are often unaware of the wide variety of colors among the beagle and prefer the traditional tricolor. Despite the fact that color preferences in judging have not yet been completely eradicated in Britain, they are still less pronounced here than, for example, in some European countries, Australia, New Zealand, and the USA.

One of the reasons for the color problem is the interpretation of the Breed Standard, which states: “Any color other than liver color for hounds. The tip of the tail is white. ” This means that there is no preference for any of the colors and their combinations, as well as their distribution and spots, do not matter, but a white tip of the tail is provided. With one exception – the hound cannot have the wrong color. This exception is liver coloration, which is considered unacceptable because it is most often accompanied by very light eyes or even green eyes with a pink outline. 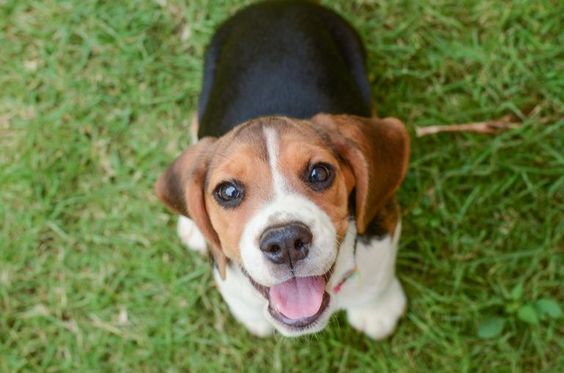 Among the recognized colors of hounds, there are three main ones: black, white, and red, each of which varies in shades, even black and white! The total number of combinations of three primary colors reaches 14, which can be divided into the following groups:

Tricolor consists of solid areas of three primary colors. The tricolor was and remains the most common color, therefore it is most often considered traditional. The tricolor with large patches of white is described as “ragged”; large area of black on the back – “black-and-white” color. A typical description of this color from a doubting nonbred judge is a “hound suit” dog.

The color is very popular in Britain and often has excellent quality. White as the main color is combined with red, which can vary from pale lemon to a rich chestnut shade. White combined with pale lemon – Lemon & whites, brighter shade of red – Tan & whites. If the red color has a reddish or orange tint, then it is a red & white color (red & whites). Black and white are acceptable but rare.

The only permitted solid color is white. Rarely found, but several examples can be counted with small patches of a pale reddish color, barely visible from a distance.

The color of hounds, in which the three primary colors are mixed and are not located in solid areas, except for white. Depending on what color the coat predominates, the overall shade changes, thus, several types of variegated hounds appear: Lemon-pied – mostly lemon or cream-colored hairs are mixed with black and white; Hare-motley (hare-pied) – more red than black and white hair, the hair is similar to a hare; and badger-pied – in which the main ones are black hairs. The variegated color is the rarest.

Similar to tricolor and bi-colored, but with small black and red dots, or specks, against a white coat. The color can be described as tricolor mottles, lemon mottles, tan mottles, red mottles.

Many years ago, hounds found in Wales and Southern Ireland were black in a certain bluish tint and were correctly called “blue-tan-white”. Nowadays, it is rare, however, several specimens have recently been seen in Australia and the United States. These blue-reddish-whites also had blue specks, hence they are called blue mottles.

A light shade of blue, almost gray, is very rare, but usually accompanied by light eyes. Blue / gray is not a real color, but a degenerate black, so it should not be considered a typical hound color.

It must be remembered that the colors of newborn puppies may vary. For example, the head, ears, and shoulders of a tricolor beagle are always black but turn red for several weeks. Likewise, shades of cream, brown, or gray on the back will soon fade away, and small white and red specks on black are usually indistinguishable by 12 weeks, fortunately for novice breeders. The deep black color does not persist throughout the life of the hound; by old age, it often brightens and can completely turn white.

Size, symmetry, and color distribution are irrelevant, except for the white tip of the tail, but can create an optical illusion that the expert must beware of. For example, a wide white stripe on the head running down between the eyes gives the impression of an over broadhead. A solid black blanket from head to tail visually lengthens the hound. A white spot on the back can give the impression of an imperfect topline, while red or black markings on the feet, both front, and back, can give the impression of lost elbows, poor angles, and lack of movement.

So, Beagles are found in a variety of colors, in fact, all are correct, and this is one of the factors that make the breed so popular. Personal preferences can be reflected in the breeding and in the show, but in no case in the judging. Without a doubt, all colors should be equal, with no preference for one over the other.