Today the Pomeranian of the bear type is one of the most popular varieties of this breed of dog. They are distinguished by their miniature size, touching external data, and a rather fighting, active disposition. This is a companion dog that loves to spend time with its owner. 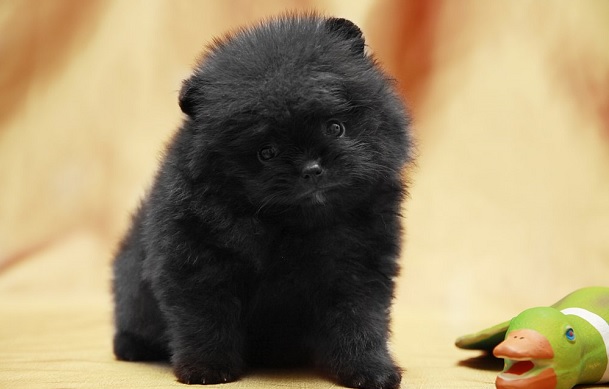 Small charcoal Pomeranian is a rarity. Getting such a pet is a great success. It is not surprising that they are also expensive in terms of cost since the color is extremely rare and breeders cannot vouch immediately after mating even two individuals of the same color that the puppies will be of exactly this color.

Important! The charcoal coat is fluffy and soft to the touch, the undercoat is also black. Such pets can be found on sale very rarely. They are usually sold at a high cost, in contrast to the breed with other popular colors.

Such a Pomeranian should be completely charcoal, without any inclusions and undercoat of a different color. The paw pads and nails should also be pigmented black. Pigmented nose and light eyes are not allowed.

Pomeranians with coal coats differ from their relatives only in the coat. Otherwise, in temperament and appearance, these are the “bears” that have a shortened, flattened, and a rather wide muzzle.

In appearance, the Pomeranian is a very miniature dog with short, rather wide-body, stable, widely spaced legs.

Also, dogs have bright, small eyes, almond-shaped. In black Poms, they are also black. The main difference between Bear-type Pomeranian is the “cheeks”. In this type of dog, they are quite plump and form a good edging.

Coal-colored Pomeranians are completely black in color. Blotches of a different color and pigmented nose, as well as light eyes, claws, and paw pads, are not allowed.

These dogs are included in the breed standard and can build a show career, participate in breeding work. However, getting such a pet is extremely difficult. They are born in droppings with other relatives and their birth cannot be predicted with accuracy.

Animals have a very active and lively disposition. They love to spend time with their master in active games and entertainment. They are attracted by long walks and interesting pastimes with entertainment.

At the same time, they are quite capricious and can dominate, if you do not train them in time, this can turn into unpleasant consequences. Pomeranians are easy to train, they quickly get used to the rules set by the owner. They are well accustomed to the place and walking on the street.

In fact, there are a lot of coat colors of the Pomeranian of the bear type. But the most common colors are still peach and bright red. Pets with this coat color can be found most often.

Such pets are extremely rare and are sold at a high cost, unlike their “standard” relatives. Breeders note that their appearance is almost always a surprise. Even when crossing individuals of exclusively black color and pedigree with a carrier of the coal color gene, there is no guarantee that the puppies in the litter will also be black. If such babies are stillborn, they may differ in the size and quality of the coat.