The algae bloom in summer can pose a threat to humans and animals. We explain what to do in the event of blue-green algae poisoning and the symptoms that can be used to identify it.

High temperatures, insufficient precipitation, and permanent heat mean that the oxygen content in the water of lakes, ponds, and streams drops rapidly. This can cause so-called blue-green algae to form.

What are Blue-Green Algae and Cyanobacteria? 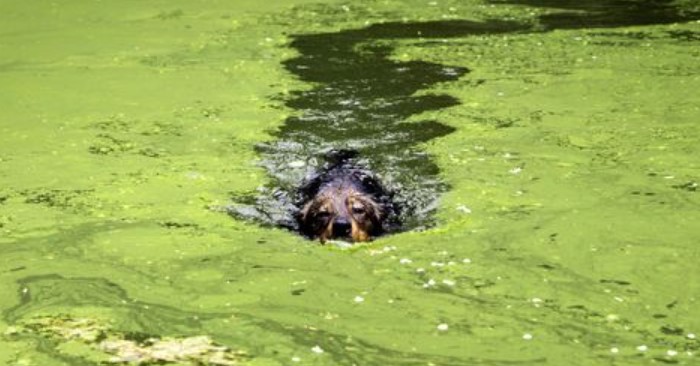 The cyanobacteria in particular are toxic to blue-green algae. Sometimes environmental or water pollution is also to blame for the formation of blue-green algae. Dogs that like to swim a lot are most often affected by this poisoning. If there is a danger of blue algae, there are always warnings from the city or clear signs such as dead mammals and birds near the shore.

Recognize blue-green algae: they are green!

First of all, it is very important to know that blue-green algae are not blue, they are green. They owe their color to chlorophyll. They got their name from the cyanobacteria they contain. Cyano is derived from the Greek word “Kyanos”, which translates as “blue”. They can be seen very clearly on the surface of a body of water. They look like carpets or streaks floating on the surface of the water.

They also cause the water to become cloudy and the algae bloom to foam. Often all of these factors come together near the shore. So exactly where your four-legged friend likes to sniff. Not only stagnant waters can be infested, but blue-green algae are also possible in the Baltic Sea or the Mediterranean Sea. Anyone wondering how blue-green algae smell should be told that it is not a pleasant smell. Often they are surrounded by a smell of putrefaction.

Curious fur noses perceive and absorb the blue-green algae in a wide variety of ways. Whether by drinking contaminated water, chewing on blue-green algae, or gnawing as well as sniffing the algae carpet, all of this leads to poisoning. If you are wondering when the blue algae symptoms appear in dogs, the answer is a 30 minute period.

Blue-green algae produce different types of poison. Therefore the symptoms are very different. If your dog has drunk blue-green algae water, he may develop diarrhea and jaundice. If weakness, light-colored mucous membranes, and shock also occur, it is microcystin. A poison that mainly attacks the liver and causes the organ to fail. If the dog ingests the toxin anatoxins, muscle tremors, cramps, paralysis, and diarrhea occur. In addition, the mucous membranes are bluish or purple in color. Other symptoms could include:

If your four-legged friend suffers from blue-green algae poisoning, you need to act quickly. At best, it goes straight to the veterinary clinic or the vet. The professionals know what to do and can take appropriate countermeasures. It is very helpful if the previous signs can be well described. It can also be useful to know the exact place of origin, as it may be a specific poison. It is very important not to ignore the symptoms. In the worst case, blue-green algae poisoning leads to the death of the beloved four-legged friend.

Prevent the Risk of Blue Algae

Our advice is clearly in the direction of prevention. Don’t let your dog get near blue-green algae in the first place. In summer you should always have a small drinking bottle with you for your four-legged friend anyway. Then it never occurs to him to drink from the pond, lake, etc. A close look at the water also provides information about whether it is contaminated or not. In addition, the local authorities and cities issue a warning when the algal bloom is very strong, which can be viewed on the Internet.