Changing teeth in dogs is a completely natural process. However, if the dog is teething it can be problematic in some cases. Some puppies experience painful symptoms and exhibit unusual behavior, such as becoming snappy or pulling back. Pettime reveals what you need to know about changing teeth in dogs and how to deal with problems that arise.

Changing Teeth in Dogs in Brief 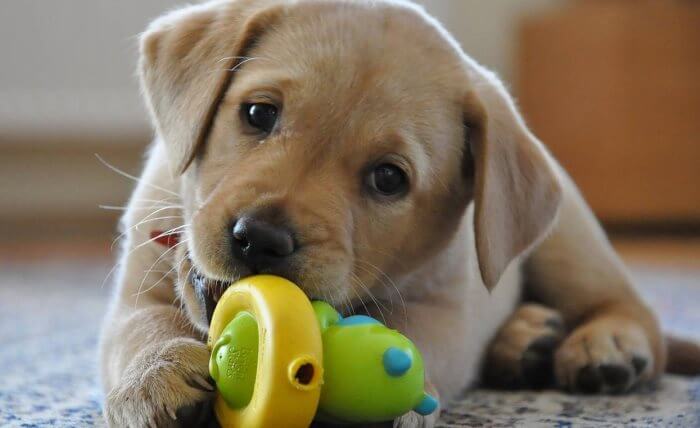 From the third week onwards, milk teeth pierce the puppy’s jaw. 28 teeth result in a complete set of milk teeth, a total of 42 teeth form the permanent set of teeth. The change of teeth to permanent teeth begins in the fourth month and lasts about twelve weeks. The eruption of the canines (canines) is most often associated with difficulties.

What Symptoms Does a Puppy Show When Teething?

If a puppy is teething, it can lead to some serious symptoms that you should discuss with a veterinarian:

What to Do if the Puppy is Teething: How to Help Your Dog?

How you can make it easier for your dog to change teeth: Give him something to chew on. Chewing and biting on an ox pizzle or beef ear will keep the gums soft and make it much easier for the teeth to breakthrough.

Tip: Only give the puppy softened dry food as it is much easier for him to consume it.

Eating is particularly important for the little four-paws because they have a high energy requirement.

It is also helpful if you massage your little dog’s gums with your finger. Chilled food soothes the uncomfortable itching that puppies feel in their jaws. Another option is the administration of calcium to support bone formation.

When the dog is teething, some owners give granules.

For owners who want to support their young dog with homeopathic remedies, there are over-the-counter globules in the pharmacy. The preparation is called Osanit and is actually used by human children to cope better with the pain and problems when changing teeth. Whether it really works is an open question – the only thing that is certain is that you can’t go wrong with it.

Important: If you decide to give your dog globules while it is teething, make sure you use a sugar-free preparation.

Avoid tugging during the sensitive time of changing teeth and make sure that the dog does not pick up any foreign objects such as plastic or stones. During this time he is literally looking for ways to avoid the itching and foreign bodies lying around are also welcome. This is why you need to be extra vigilant, as it could choke your puppy.

Changing Teeth: In What Order Does the Dog Lose Its Teeth?

The deciduous dentition consists of 28 deciduous teeth, which are replaced by 42 permanent teeth. The first milk teeth fall out at around 16 weeks of age. You can find more information about the dog’s teeth and dentition in this article. Changing teeth in dogs is often associated with a little blood, but many owners hardly notice the change. The dog swallows its teeth or spits them out. During the following three months, the old deciduous teeth say goodbye, and the permanent teeth grow back in the following order:

What Complaints Does the Dog Have When Changing Teeth?

As with teething, some dogs suffer more pain than others when they switch from deciduous teeth to permanent teeth. The symptoms are expressed in the following concomitant symptoms:

If you find that a milk tooth does not want to fall out, then visit the vet. In stubborn cases, he will pull the affected teeth.

Why Does the Dog Have Bad Breath When Changing Teeth?

Some dogs smell bad from their mouths when they are changing their teeth. The explanation is very simple: if one of the erupting teeth in the jaw becomes infected and festers, an unpleasant odor develops. You should definitely go to the vet if you have a purulent or putrid smell because inflammation in the jaw can spread to other organs. The veterinarian will take a close look at the jaw and take countermeasures to find and eliminate the pus focus.

Conclusion: Keep an Eye on the Dog During Teething and Changing Teeth

You should keep an eye on the animal while your pup is having a tooth or is changing teeth. Observe the behavior and try to alleviate the symptoms as much as possible. Chilled chew toys, soaked food, and an extra portion of pats help the four-legged friend to survive these two phases as unscathed as possible. However, if you notice that the little companion is in severe pain or that his behavior has changed completely, then visit the vet. This can determine whether the symptoms are to be assessed critically and, in an emergency, help the fur nose to survive the time as lightly as possible.

However, most owners can have no worries, because many puppies have no problems with teething or changing teeth. It is rather rare for animals to be affected so badly that they need veterinary help.