Cruelty to animals has different faces. People often deliberately do bad things to animals, but sometimes without even realizing it. For example, when dog lovers choose the sweet pug with the short nose at the breeder. Short-headedness, also known as brachycephaly, is not a cute feature, but a deformation caused by humans through overbreeding.

The term brachycephaly describes a deformation of the skull in dogs. The disease is specifically amplified by humans through breeding. Affected dog breeds suffer a lot from the associated symptoms, especially shortness of breath during exertion or in summer.

Brachycephalic animals have wider and shorter skulls. The head becomes rounder, the nose, and the jawbone shorter. This leads to a flat face like that of humans, with eyes next to each other. Through targeted pairings, breeders want to achieve the child pattern in the animals concerned. Because: Many people find exactly that sweet and limit their purchase criteria to it.

Which Races are Affected by Brachycephaly?

English and French bulldogs or pugs are among the most affected breeds, as are boxers and Pekingese. Their snouts have largely been bred back. All of these races suffer severely from the following symptoms, depending on the degree of short-headedness.

What Problems Do Brachycephalic Dogs Have? 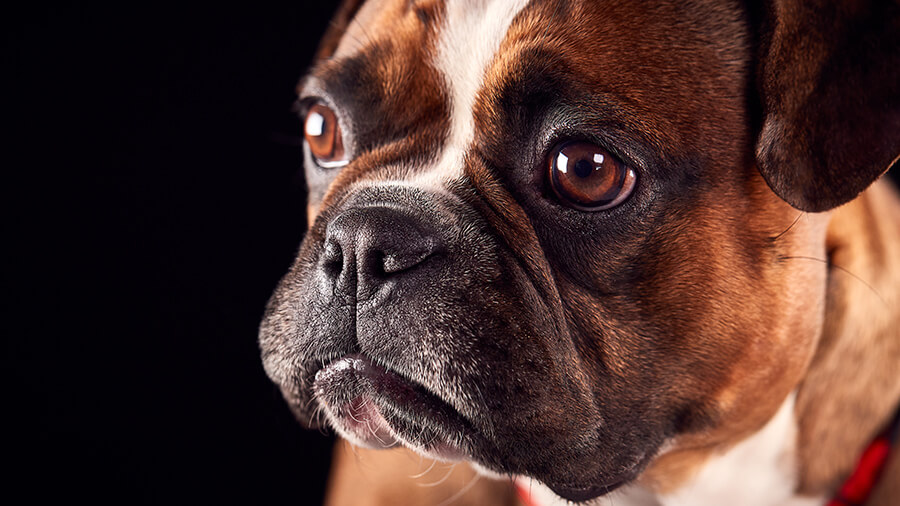 A very typical symptom of brachycephalic syndrome in dogs is a soft palate that is too long. There is also a turbinate that is abnormally deformed. It is combined with narrowed nostrils. In addition, there is a larynx, which is too small, and a trachea, the diameter of which is also too small and thus additionally blocks the airway. In addition, the breeds suffer a collapsed larynx in many cases.

Many brachycephalic dog breeds suffer from shortness of breath due to the deformed nose. The four-legged friends typically make snorkeling, groaning, and grunting noises when breathing and snoring a lot. Their crippled nasal mucosa also does not allow them to regulate their temperature. The consequence of the pathological changes is an excruciating life that is on the verge of suffocation or heat death. Many of the dogs also have to vomit regularly due to their difficulty breathing.

The so-called toy dogs such as Yorkshire terriers, bulldogs, Chihuahuas, and pugs often have a tendency to water their heads in breeding. While deformity is greatly feared in humans, it is considered cute in dogs. The fact that a head of water can cause malfunctions in the brain, which can even lead to the inability to live, is accepted.

Females cannot give birth to puppies with unnaturally large-bred heads themselves. A cesarean section is necessary. Since many breeds are bred to have an underbite, the bitches cannot bite open the amniotic sac of their puppies on their own. If the breeder does not act fast enough, the puppy will suffocate.

Can Brachycephalic Breeds Be Helped?

Many of the problems can be resolved with surgical treatment. However, it is not guaranteed that the dog will get a better life as a result. In the best case – after the torture caused by the operations – his breathing will be easier and he can lead an almost normal life, but in severe cases, he will have to continue to suffer for the rest of his life.

Brachycephaly: Are There No Breeding Regulations?

The modern breeds with brachycephaly or short-headedness are absolute torture breeds. Unfortunately, there are currently no regulations that would prohibit the breeding of mold breeds. Even the association for the German dog industry does not put a stop to this agony breeding.

What Other Torture Breeds are There in Dogs?

Short, crooked legs in dogs are also fashionable. Bulldogs, bassets, dachshunds, pugs, and corgis have to grapple with that. The often broken legs are caused by a cultivated genetic defect in cartilage formation. The genetic defect does not stop at the cartilage in the intervertebral discs, which is why these breeds often also have to struggle with herniated discs at a young age.

Even with certain coat colors that actually seem harmless, it is often a question of genetic defects. Many Dalmatians and other dogs, especially gray ones, with the merle gene are blind or deaf.

The breeding design does not stop at the dog’s eye. The cute goggle eyes, which are so beautifully watery, mean inflammation for dogs, which is favored by certain breeds. If there are no tails or stub tails, the breeds are deprived of a means of communication. Dogs may be able to compensate for this, but not the difficulties in balancing or the malformations of the vertebrae, kneecap displacements, and hip dysplasias. And that is exactly what these crippled rods cause in many cases.

Many people make cuddly toys out of their pets, no matter what price the animal has to pay for them. Animals are humanized, attracted, and downright fattened out of a misunderstood love. Dogs have completely different needs. Instead of accepting genetic defects in breeding so that the dog looks exactly the way people want, animal welfare should be brought back into focus. Breeding is always an issue of supply and demand. When humans understand the suffering of torture breeds and no longer accept them, breeders will be forced to return to the original breeds.