The Bull Terrier dog breed has never been popular. But this dog with an unusual appearance will be recognized by everyone. Among people unfamiliar with the breed, he has a reputation as a killer dog, vicious and dangerous. But in fact, it is a loyal companion, affectionate and gentle with all family members. He is not angry, very playful, and calm. 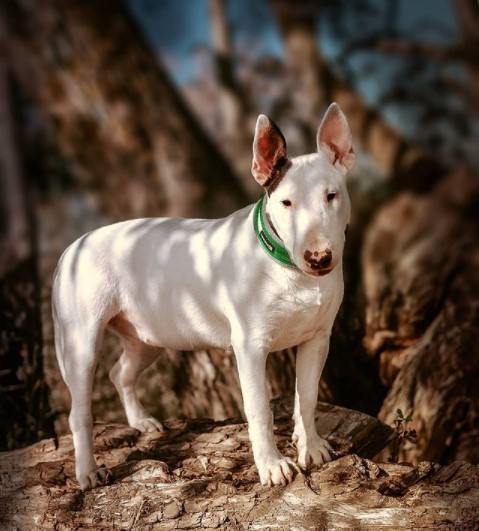 Bull Terriers are medium-sized, but very strong and muscular dogs with a rather unusual appearance. The breed standard does not provide specific data on height and weight. The dog should not give the impression of being ponderous or, conversely, lean. It is important that the Bull Terrier is harmonious and proportional and has a stocky, dense build.

Bull Terriers have a strong physique with developed muscles, wide, powerful chest, short, strong back, muscular, stable limbs. Low-set, long head, devoid of distortions and bends and, when viewed from the front, take the shape of an egg. Strong jaw, strong, healthy teeth, scissor bite. The eyes are narrow, medium-sized, triangle-shaped, color: dark brown. The ears are small, set at a short distance from each other, erect. The tail is set low, short, and tapering towards the tip. The coat is short and dense, color: white (the presence of spots on the head is permissible) or colored (the color prevails over white). 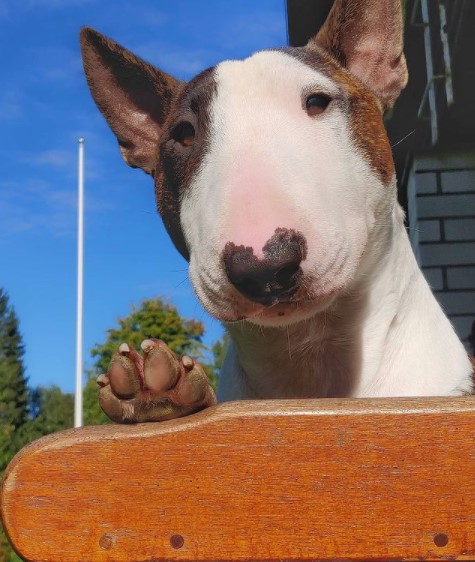 The breed was bred as a strong fighting breed. Therefore, the Bull Terrier does not feel pain, it is a very strong and agile dog. But basically, her character will depend on her upbringing. If the owner of the Bull Terrier subdues the animal, showing that he is the leader of the pack, the dog will unquestioningly carry out all his commands.

The Bull Terrier is a very playful and active dog. She needs daily long walks more than others. That is why active energetic young people need to have such a pet. For retirees, an energetic dog will become a burden.

Don’t be afraid of Bull Terriers. In those days, when he was raised as a fighter, the dog was never turned against a person. According to the standard, even then only balanced individuals were left. Aggression and anger can develop in a dog as a result of improper upbringing or a bad attitude towards it.

Bull Terriers can sometimes be moody and do not want to share the owner with other pets or household members. Also, a dog of this breed is not ready to obey and endure slavery. Therefore, in raising a dog, it is necessary to show maximum patience and care for the pet. The high intelligence of the dog will gladly respond to the intrigues of friendliness. A fair treatment will be rewarded. The animal will become obedient by feeling self-love. She will also be affectionate to her owners. 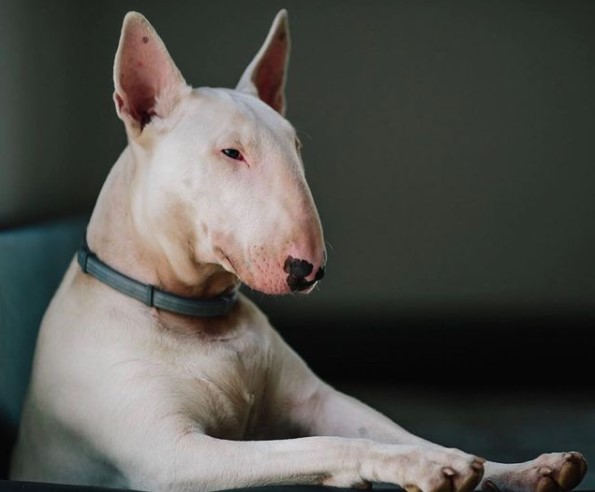 Bull Terriers are hardy dogs with good health. Eyes and ears need regular checks. For good health and well-being, your dog needs active walking, jumping over the bar, jogging, playing with a ball, and a proper diet without disturbances. These dogs tend to be overweight. 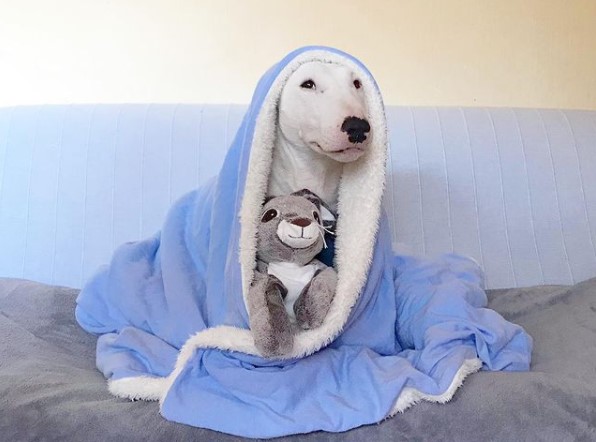 Bull Terriers are unpretentious dogs. They do not require complex maintenance. During the molting period (2 times a year), it is necessary to regularly comb out the dog with a brush or a special mitten. Frequent washing is not necessary. Dirt from dense wool can be easily removed with a damp sponge or towel. Bull Terrier claws are trimmed as needed unless they are naturally worn down during walks. 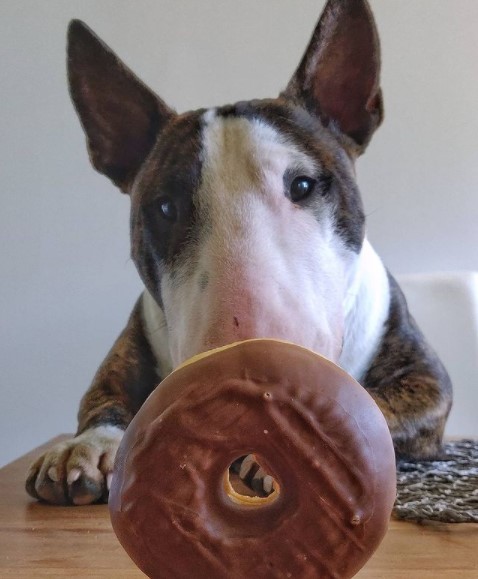 Bull Terrier nutrition is not very different from that of other dogs. However, you should not switch from feed to natural food or vice versa. For example, if you started feeding your puppy from dry food, then the animal’s diet should continue to consist mainly of them. But it is still necessary to periodically add natural food.
As a treat for pets, you can feed him: bread croutons, cheese, and dried fruits.
It is not recommended to give your dogs pastries and sweets. 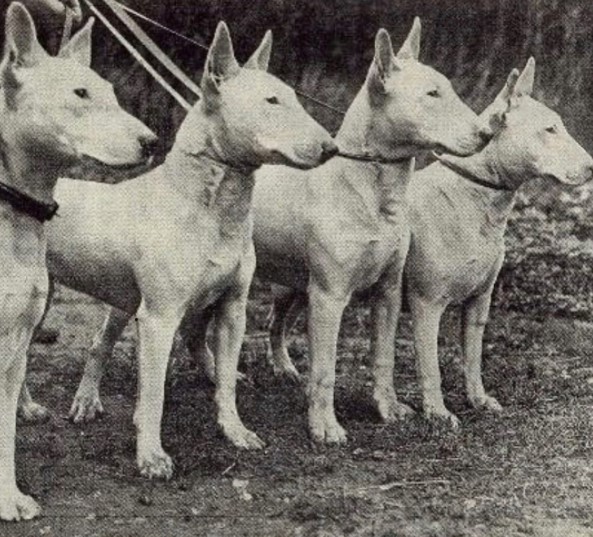 The homeland of the Bull Terrier in England. This breed was bred in the middle of the 19th century through many years of breeding work. The ancestors of the Bull Terriers were the White English Terrier and the English Bulldog. The White Bull Terrier was first introduced at the 1862 dog show by breeder James Hinks. The Bull Terriers have united the best features of their ancestors: well-developed muscles combined with intelligence, stockiness, and almost youthful activity. It is not surprising that the breed immediately gained a lot of fans.

In Oxford, for some time it was believed that every self-respecting teacher and student should definitely have a white Bull Terrier.

The breed was officially recognized by the English Kennel Club at the end of the 19th century, and at the beginning of the 20th century, colored Bull Terriers were bred within the breed. 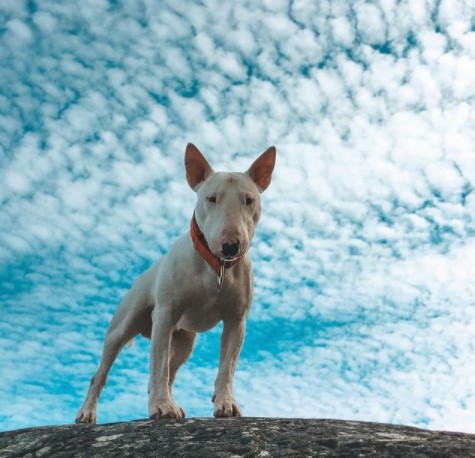 It is a misconception that Bull Terriers are aggressive and vicious dogs. They are smart and kind from birth. But like any other breed of dog, a pet needs to be educated, taught from puppyhood to good behavior and elementary commands.

Bull Terriers need vigorous exercise and long walks so they are not suitable for sedentary people. Dogs can easily get along with other pets in the house if they are used to living with them since childhood. The innate stubbornness of an animal cannot be broken by aggression; one must wait with patience for his obedience.

The Bull Terrier will become an excellent companion and loyal friend, absolutely safe for others if the dog lives in love and affection.