To the human palate, dishes without spices taste bland and boring. But not everything that is good for people is also suitable for dogs. If spicy food ends up in the dog bowl, it can quickly become dangerous for four-legged friends. Here you can find out which spices are harmful to dogs and which are good for them.

Spices for Dogs: What Is It? 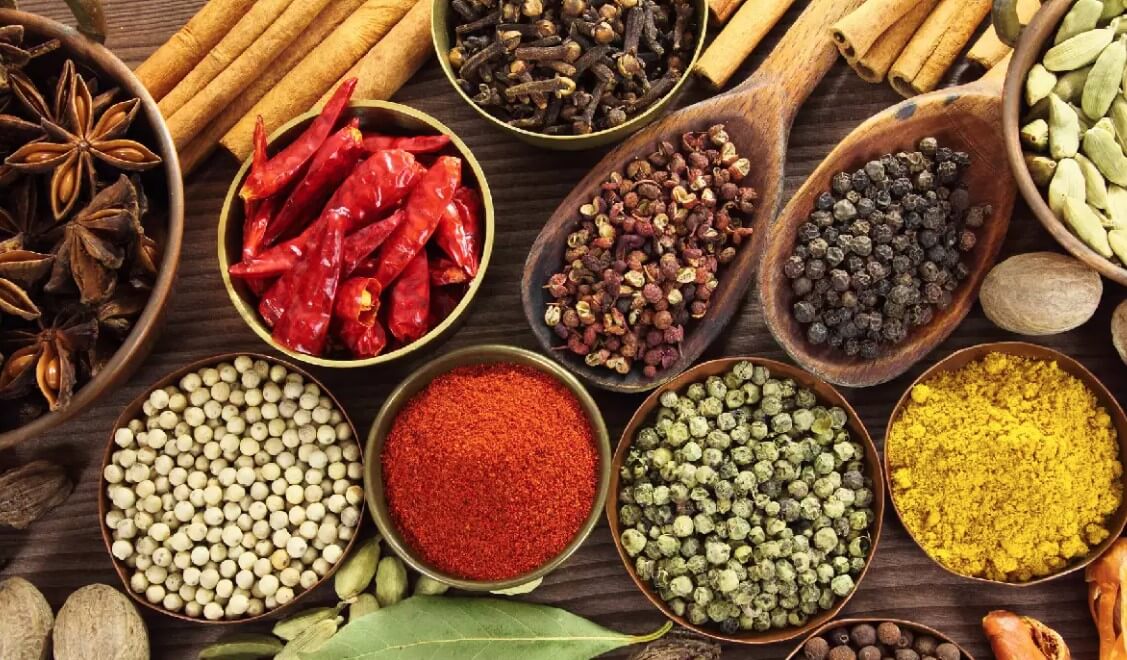 The use of spices is a matter of course in the kitchen. But what exactly falls into the spices category? According to the Food Act, spices are parts of plants with a flavor or odor effect. Thus, spices are a generic term for many different condiments that contain natural flavors or essential oils. These include:

Salt is an exception because it is not a plant, but is extracted from the sea or from salt mines. However, salt is also colloquially referred to as a spice.

Which Spices are Dangerous for Dogs?

Dog nutrition guides usually warn against salt and spices. In fact, spicy food can harm your dog, as many of the spices popular in the kitchen are poisonous or poorly tolerated by dogs. But it also depends on the amount. Salt, for example, is vital for the dog, but only in moderation. Too much salt, on the other hand, can damage the kidneys.

Other spices can cause symptoms of poisoning or intolerance. Symptoms such as vomiting, diarrhea, tremors, and increased drinking are the result. These spices have no place in the dog bowl:

Salt: The dog’s salt requirement is usually covered by the food. An additional dose of salt is not necessary. You should also not give your dog broth, as it consists mainly of salt.

Hot spices such as pepper, chili, or curry are poorly tolerated by dogs. If dogs eat spicy food, stomach upset, vomiting and diarrhea can occur.

Onions and leeks such as onions, shallots, garlic, chives, and wild garlic contain sulfur compounds such as the substance alliin, which is toxic to dogs, and are even life-threatening in high doses.

Nutmeg contains the substance myristicin, which is toxic to dogs and which can lead to neurological reactions. Ingestion can lead to disorientation and respiratory paralysis in the dog.

Rosemary contains essential oils that can induce cramps in dogs. If the dog suffers from epilepsy or cramps, the herb in the bowl is taboo.

Cassia cinnamon contains the substance coumarin, which has a cancer-promoting effect. For this reason, the dog food should not be seasoned with cassia cinnamon.

Which Spices Are Healthy for Dogs?

The herbs basil, coriander, mint, parsley, oregano, and thyme are tolerated in small quantities by dogs. Because of the essential oils, many herbs have anti-inflammatory and digestive effects.

Fennel seeds stimulate the dog’s appetite and, when used as tea, relieve digestive complaints such as flatulence and diarrhea.

Ginger is a proven remedy with antibacterial properties in dogs. As a cure, the spice can be mixed with the usual dog food.

Ceylon cinnamon contains less coumarin than cassia cinnamon and, in very low doses, can refine the dog’s food and stimulate the metabolism. However, regular cinnamon feeding is not recommended.

Turmeric has antioxidant, anti-inflammatory, and cancer-preventive effects and can therefore be used as a spice in dog food from time to time.

Conclusion: the Dose Makes the Poison

Spices are not generally harmful to dogs. In small amounts, selected spices and herbs can have a beneficial effect on digestion and the well-being of your four-legged friend.

When feeding, you should always follow the motto “less is more” and only dose spices very carefully.

If you are unsure about the tolerable amount, simply resort to dog foods that are already seasoned and contain an easily digestible dose of spices. Food for people such as sausage products are generally not suitable for dogs, especially if they contain large amounts of spices or salt.