Nutmegs are known less as nuts and more as spices. The small brown seeds give dishes a unique flavor. But are dogs allowed to eat nutmeg or is nutmeg toxic to dogs? We have summarized the most important information for you.

Contents hide
1 What is Nutmeg?
2 Can Dogs Eat Nutmeg?
2.1 This is What Makes Nutmeg So Toxic to Dogs
2.2 Nutmeg Poisoning: Dog Can Show Severe Symptoms
3 How Much Nutmeg is Toxic to Dogs?
4 Dog Ate a Pinch of Nutmeg – What to Do?
5 Storing Nutmeg: Protect Dog From Poisoning 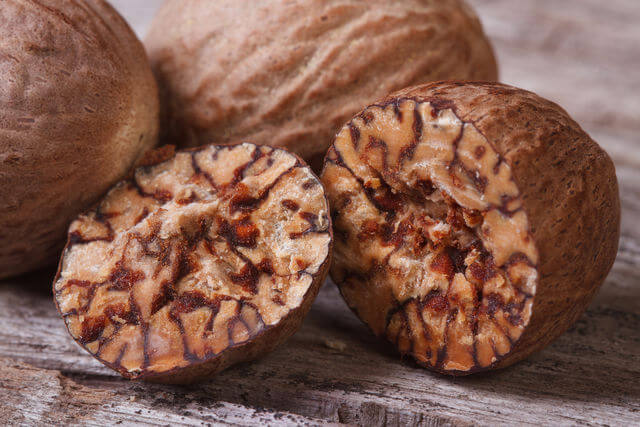 Nutmegs are the seeds of the nutmeg tree. Most of the nutmegs are produced in Guatemala, Indonesia, and India. The grated brown nut is mainly used as a spice in the kitchen, but also in traditional medicine.

Dogs are never allowed to eat nutmegs. Unlike many other nuts, nutmeg is very poisonous to dogs. Even small amounts can cause poisoning or even be fatal.

This is What Makes Nutmeg So Toxic to Dogs

Nutmegs contain the substances elemicin, myristicin, and safrole. These active ingredients are hallucinogens. They have a mind-altered effect and lead to states of intoxication. The nut owes its reputation as an aphrodisiac in humans to the intoxicating effect. Even in dogs, nutmegs cause intoxication that can be life-threatening.

If the dog eats nutmeg, it will cause severe symptoms of intoxication. The active ingredients elemicin, myristicin, and safrole act on the brain and nervous system, so that mainly neurological symptoms occur. In the worst case, the nutmeg can be fatal to the dog. The following symptoms are typical:

How Much Nutmeg is Toxic to Dogs?

Nutmeg is poisonous even in very small quantities. Incidentally, this does not only apply to dogs: in humans, a quantity of around three nuts is considered fatal. In dogs, severe symptoms occur even after significantly smaller amounts. Therefore, you should not even give your dog a pinch of nutmeg, but completely refrain from feeding the poisonous nut.

Dog Ate a Pinch of Nutmeg – What to Do?

If your dog has eaten nutmeg or you suspect poisoning, be sure to contact your veterinarian right away.

As with all poisoning, it is important to get the dog to the practice as quickly as possible. Do not try to make your pet vomit or give the dog milk or other food as these can potentially increase the toxicity.

To protect your beloved four-legged friend, always keep nutmegs and other spices and nuts inaccessible. This is the only way you can be sure that the dog does not eat nutmeg.