Laughter is the most beautiful language in the world. It relaxes, has a contagious effect, and is a balm for the soul. In short: laughter is a real treat for the body and mind. The question arises whether only we humans benefit from these positive properties. Let’s take a look at our four-legged friend: Can dogs interpret the laughter of masters and even imitate them? You can read about the current state of science on the interesting question “Can dogs laugh?”

Contents hide
1 Can Dogs Laugh? That’s What Science Says
1.1 Dogs recognize human facial expressions
1.2 Imitation of behavior
2 What Does a Dog Laugh Look Like?
2.1 Parallels to human laughter
3 Can Dogs Laugh? Do Not Confuse It With the Threatening Gesture!
4 What About the Wolves?
5 Friendly Breeds of Dogs That Smile
6 Can Dogs Laugh? – Conclusion 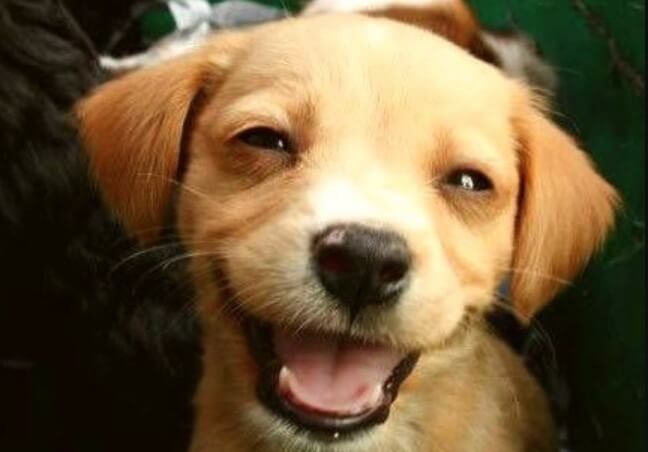 Anyone who previously assumed that the happy facial expression is only reserved for humans will be taught better. Dogs are able to demonstrate their joy with a grin. While the question “Can dogs cry?” Has been little researched, many scientists agree on this. Even before a study published in 2015 (under the supervision of Ludwig Huber, university professor at the University of Veterinary Medicine, Vienna), it was assumed that four-legged friends had adapted to human behavior during the millennia of domestication. But to date, no study has shown that dogs can distinguish facial expressions from other species. They are true masters at it!

Laughter is a popular means of communication that we humans show our dogs every day. Four-legged friends are not only excellent at reading and interpreting people’s facial expressions, but much more: The German specialist veterinarian for behavioral science, Dr. Dorit Feddersen-Petersen, discovered during her research that dogs imitate human behavior.

The majority of dog owners will answer the question “Can dogs laugh?” In the affirmative. Often we notice a dog laugh as a kind of greeting ritual. Every dog owner knows the situation: We unlock the door and are happy to see our dog again. The mere sight of the fur nose is enough and we forget the stressful day and immediately start smiling. The joy of reunion is great – on both sides. The four-legged friend rushes towards his loved one happily. We observe a wagging tail, an eager running back and forth, and finally a beaming smile on the muzzle.

A dog’s laugh is similar to that of a human: The fur nose pulls the corners of the mouth up and shows its teeth. At the same time, as with humans, you can see shining eyes and the body posture is relaxed. Only the sounds that we humans make when we laugh heartily are gone. Otherwise, a dog laugh is like a human laugh: it immediately puts you in a good mood and is extremely contagious.

Can Dogs Laugh? Do Not Confuse It With the Threatening Gesture!

As with laughing, an aggressive dog will also show its teeth. But observers can clearly distinguish the threatening gesture from a relaxed laugh. If a dog intends to intimidate its counterpart, this can be recognized by the following features:

It turns out that apart from the common feature – showing teeth – there are no parallels. This makes it easy to tell the difference between the two gestures.

What About the Wolves?

During the millennia of domestication, the dog’s behavior has clearly diverged from that of its ancestor, the wolf. The genetic match is around 99% – but the high percentage doesn’t say much. Humans and monkeys are genetically identical to 98.7% and a mouse still approximates Homo sapiens with at least 90%.

In contrast to the dog, a wolf uses the signal “show teeth” only to threaten. This seldom happens because wolves in packs mostly resolve conflicts peacefully and are only prone to aggression in absolutely exceptional situations. The contrary facial expressions of wolves and dogs show: the woof-woof has adapted his body language including his facial expressions to the people.

Friendly Breeds of Dogs That Smile

Breed breeding has produced an enormous variety, which is not only reflected in nature but also in appearance. There are fur noses that wrap their humans around their fingers with grim expressions on their faces. These include, for example, the English bulldog and the Brussels griffon.

Then there are dog breeds whose facial expressions produce a radiant smile. These include, for example:

Every dog laugh is unique and a sight to behold. Dr. Dorit Feddersen-Petersen sees differences in dog breeds. In her opinion, there is one breed among all dogs that stands out with its extraordinary smile: the Dalmatian!

Over the millennia, man’s best friend has become an expert in human communication. One of the many means of communication among many is laughter. Many dog owners are not surprised that science now answers the question “Can dogs laugh?” With a “Yes”. Even if dogs and humans are two species, there are numerous similarities that have developed due to their special bond with one another.
We humans don’t need to watch a comedy to laugh with all our hearts. A dog can do this without trying too hard. So what could be more obvious, often to laugh together with your own furry friend?