In canicross, dogs and humans compete as a team on varied trails in nature. Everything you need to know about dog pulling can be found here.

Contents hide
1 Definition: What is Canicross?
2 What is Important in Canicross with a Dog?
3 How to Teach Canicross to the Dog?
3.1 Start with Canicross Step by Step
4 Canicross Equipment: Belts, Harness, etc
4.1 Joring line
4.2 Canicross harness
4.3 Canicross lap belt
5 What Breeds of Dogs for Canicross?
6 Canicross: the Fitness of the Dog
7 At What Age Do You Stop Canicross?

Definition: What is Canicross? 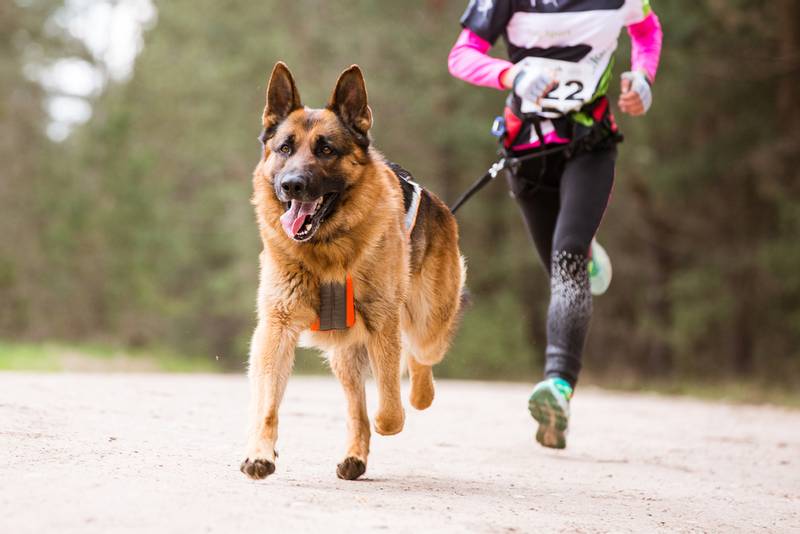 Canicross is a relatively young dog sport, which, like a bike, scooter, and skijoring, is part of the pulling dog sport. In canicross, one or more dogs do not run next to, but in front of their humans. The pulling power and speed of the dogs make Canicross a demanding sport.

A joring line, which is attached to a waist belt on the human being, connects the dog-human team. The dog sport requires good fitness, healthy joints and the dog to be able to run.

What is Important in Canicross with a Dog?

Before starting the first training lesson in canicross, a few tips must be followed:

How to Teach Canicross to the Dog?

Step by step to the perfect canicross team – that’s the motto. Not everything will go smoothly at first. The more training units are completed, the tenser the canicross team becomes. It is generally advisable to do the first few hours of training under the supervision of an experienced canicrosser.

Later on, dog owners can also take part in canicross competitions there. The trend sport inspires more and more people, which is why the range of canicross courses is increasing. The first steps can be as follows:

Start with Canicross Step by Step

Dog owners need the right equipment for this dog sport. The individual components are important for the safety and for the correct practice of Canicross.

The flexible canicross leash should be made of sturdy material. In addition, it is important to ensure that the leash is light so that comfort does not fall by the wayside during dog pulling. It is also important to have to cushion that is based on the dog’s weight. The integrated cushioning protects both the dog and the biped from jerky shock movements and is essential for canicross. If the line is in a normal condition, it is about 1.70-1.90 m long. When stretched out, it extends by around 30 cm or more, depending on the manufacturer.

Just as important as the leash is the right harness for the dog. It should adapt perfectly to the silhouette of the four-legged friend, relieve the tension on the neck and back, and also be padded all around. Thanks to the padding, the tensile load on the four-legged friend remains pleasant and comfortable. If Canicross is carried out in poor visibility, reflectors are recommended for increased visibility. In the specialized trade, there is the possibility to test the harness on the dog and to take the advice of an expert. Orientation values ​​with measurements on the back and neck or weight information are available in online retail.

A comfortable lap belt, which is characterized by its low weight and is also equipped with reflectors, is recommended for the dog owner. A good lap belt also impresses with the fact that it evenly distributes the tensile load and never loads it at certain points. Ideally, it is equipped with a so-called “panic snap”. This is an add-on that enables the leash to be disconnected in dangerous situations – for example in the event of a fall.

What Breeds of Dogs for Canicross?

Examples of running dogs with optimal body weight are:

In principle, every dog who enjoys running is eligible for Canicross. But there are a few criteria to consider: Massive dog breeds, such as Newfoundland dogs or mastiffs, are unsuitable for running long distances.

In principle, even a lightweight is not ideal for pulling dog sports. Small, agile dogs, such as Cairn Terriers or Fox Terriers, will certainly enjoy Canicross. In the case of small dogs, draft dog sport can be a welcome change as a hobby for both of them.

Canicross: the Fitness of the Dog

Dog health is an important issue in all canine sports. Sports dogs should have their general health checked regularly by a veterinarian. They can give the go-ahead for Canicross during a check-up.

Special attention is paid to all those who do not belong to the seniors but are no longer youngsters either. Here the dog sport is to be discussed with the veterinarian. In the case of findings such as osteoarthritis, hip dysplasia, and other health problems, Canicross can of course no longer be continued. It is also important to get an idea of the general condition of the dog directly before the canicross.

At What Age Do You Stop Canicross?

With age, the dog’s urge to move, firstly, and secondly, the strength in the muscles diminishes. Therefore, canicross is not a suitable leisure activity for elderly four-legged friends. However, there is no general age limit. Entry into senior age varies depending on the dog and breed. As a rule, small dogs are fit longer, while extremely large four-legged friends experience age problems from the age of 5. Caution is also advised against too much motivation in the case of owners of young dogs or puppies.

Dogs should only be able to enjoy the dog sport after they have reached their final size – at the earliest from the first year of life.

As the age and growth phases of the dog differ depending on the breed, size, and state of health, the advice of the veterinarian should be sought.