According to the official breed standard, Cavalier King Charles Spaniels can only have four colors. Black and tan, ruby, tricolor, and Blenheim. The last option is considered the most interesting and attractive. 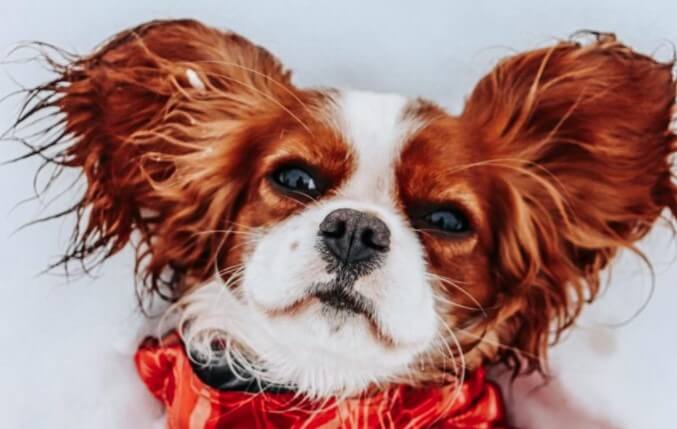 Initially, the breed had only two color options – red or black. These were the direct ancestors of the cavaliers – the King Charles Spaniels. These miniature dogs were extremely popular in the 16th century at the court of the English crown. An extraordinary interest in the external data of these dogs allowed them to retrain from hunters to court sloths.

The peak of fashion for these spaniels came during the reign of King Charles II. The court dog breeders so wanted to please their ruler that they only did what they tried to change the appearance of the Cavalier King Charles Spaniels. They tried to dilute the black and red suit of the gentlemen with new colors and shapes.

From crossing with water dogs, the Cavalier Spaniels acquired a new black and tan color. However, this connection also had negative consequences. More than half of the offspring born had certain genetic defects in appearance. The tricolor color was achieved thanks to the mating of a black and white Dutch spaniel and a red and white Italian spaniel.

The two-tone chestnut-white color was formed thanks to the ancestor of the famous W. Churchill. The castle given to him by Queen Anne was named Blenheim House. It was there that the first large and powerful cavaliers with an unprecedented color appeared. The new variety was named after the castle.

Important! Blenheim Cavalier King Charles Spaniels have a snow-white coat with red spots. The spots are located on the torso and head. On the forehead, there is a distinctive feature of color – a snow-white blaze in the form of an elongated shape. It is called the “kiss of the Buddha.”

This variety has another distinctive feature – a small mark. According to legend, it appeared thanks to one duchess. She was waiting for her husband from the war and in excitement squeezed the ear of her beloved dog with her fingers. She was waiting for the next offspring. After the dog gave birth, a small white spot was visible on each of the puppies’ ears. In shape, it resembled the fingerprint of their mother’s mistress.