The Cichlidae family belongs to a fairly large group of perches, the German name for the cichlids – “variegated perches” – reflects the peculiarities of their color. About 1300 species are described in this group, and the total number reaches 1900.

Cichlids are extremely diverse and are among the three largest families of vertebrates. In size, among the representatives of the family, there are both tiny fish less than 2.5 cm in length (Neolamprologus, some apistograms), and giants reaching 1 m (Bulangerochrome and Tsikhly). The crumb Apistogramma has a minimum size (2.2 cm), the largest (60-80 cm, with a weight of 9 kg) is an ocellated cichlid. There are also several varieties in body shape – from species strongly compressed from the sides, the body of which looks like a disc (Altolamprologus, Scalaria, and Discus), to representatives in which the body is cylindrical and strongly elongated (Yulidochromis, Teleogram, Teleocychla, Krenitsichla, and Gobiotsichla ). Most fish are still of medium size and a body slightly compressed from the sides. In many species, sexual dimorphism is expressed; males are larger than females and are brighter in color.

Since cichlids are of interest to humans in several areas of use: some are of commercial importance, for example, the Mozambican tilapia, which was acclimatized in Russia and bred in ponds, others are objects of sport fishing (for example, Tsikhla), others are widely used in aquarium culture (scalar, discus, astronauts, cichlids of lakes Malawi and Tanganyika) – many natural species are endangered.

In appearance, cichlids are characterized by great diversity. The signs by which the family differs from other representatives of teleost fish are one pair of nostrils (one hole on each side of the snout, while most fish have two) and two lateral lines – the upper and lower. There are species with different structures of snouts and teeth; the mouth can be lower, terminal, or upper, as a rule, wide with ridged lips. Many cichlids have a large head with a prominent forehead, and males often have a fatty build-up. The dorsal and anal fins in many species are rather long, with hard anterior rays and softer hind rays. The caudal fin is rounded.

The body shape can also be different for individual members of the family and often characterizes the type of food. So, there are species with torpedo-like bodies, fast predators (for example, krenitsichli native to America and African cichlids lepidiolamprologus). Other species, such as discus, severum, and scalar, have a flat, tall, rounded, or nearly triangular body, which helps them hide from predators among plants and tree roots. Dissecting coloration – vertical stripes on the body – is also a good disguise technique. 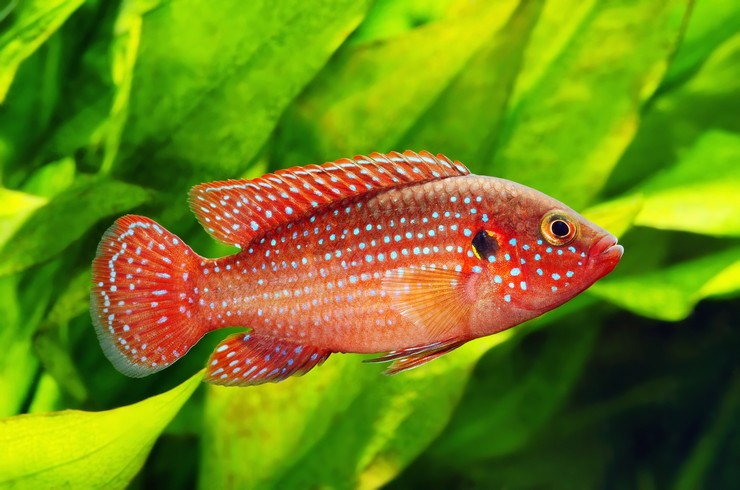 Unlike their American cousins, African lake cichlids are often very brightly colored. Such bright colors serve to attract and identify the female (which in most cases differs from the male in color), as well as in skirmishes with rivals since many cichlids are territorial.

During spawning, many species change their outfit, their color becomes brighter and more contrasting, stripes and spots on the body may appear. So, females of apistograms acquire a yellowish tint, females of green nannacars are covered with patterns of black spots.

This phenomenon of color change is observed not only during the spawning process, but also when the water parameters change or in the case of excitation, and it can occur very quickly.

In the process of selection from natural species, many breeds have been bred, differing in stable traits (for example, color). The most popular and widespread fish for this purpose were discus, scalar, astronauts, and Apistogramma. Another well-known artificially produced cichlid is the Red Parrot, a group of hybrids created by crossing several species of American cichlids.

Depending on the natural habitat, several groups of cichlids are distinguished – they are widespread in Central and South America in the Amazon River basin, in Africa and South-West Asia (this includes only three species), also found in southern India, in Sri Lanka, and on the island of Madagascar. The range of many endemic species includes the Great African Lakes – Victoria, Malawi, and Tanganyika, these fish existed for a long time in isolation, which led to the emergence of very large diversity. Tsikhlovye prefers stagnant and slowly flowing water bodies with a high oxygen content and stable water parameters. Some representatives can live in brackish water at river mouths, or even spend part of their life at sea. 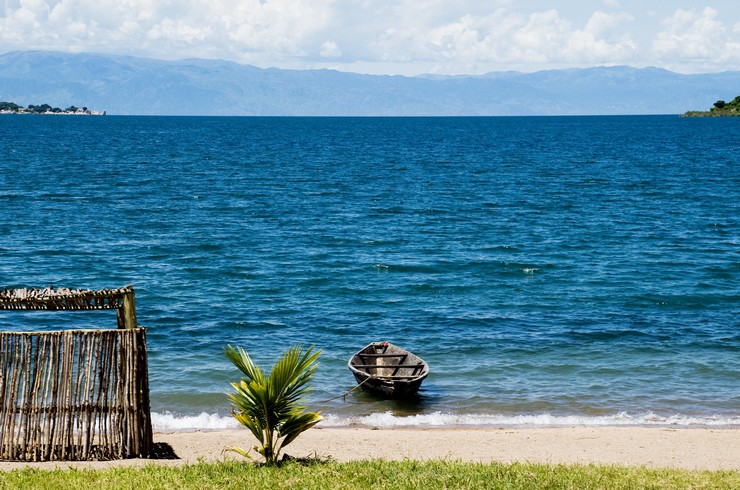 Due to the very large variety of cichlids and their presence on several continents, the region of origin of the species must be taken into account when keeping. The two major geographic centers of speciation are South America and Africa. Also found three species of cichlids in Asia, and five species – on the island of Madagascar.

American cichlids naturally live in soft, low pH water. Among African relatives, two groups can be distinguished: river species and species of the African Great Lakes. The living conditions for the former (pelvicachromis, handsome Chromis, etc.) are almost identical to their American relatives, but the lake inhabitants will require the aquarist to maintain very hard and alkaline water. Perhaps, only the requirements for the water temperature will be common. All species are thermophilic and a comfortable temperature for them will be 22-27 ° C. Some African species also tolerate increased salinity of up to 30-50% without problems.

The second very important point when keeping cichlids is the correct size of the aquarium. As noted earlier, the group of fish is very heterogeneous: some species are “dwarf” – their size is several centimeters, others are giants, for which the size of 30-40 cm is not the limit. It is also necessary to take into account that cichlids are very territorial fish. This mechanism (especially among African representatives) developed in them as a result of fierce competition for limited food resources. Any outsider intruding into the territory will be immediately attacked. And if in nature a weaker individual swims away from the bully, then in the conditions of the aquarium it will have nowhere to swim, which can lead to reprisals. From this, it follows that in an aquarium of a suitable volume, it is necessary to make clear zoning and place a large number of shelters, which will allow leveling intra- and interspecific aggression.

Almost all types of cichlids are not compatible with living plants. This is reflected not only in the direct eating of the green parts but also in the frequent habit of digging up soil in the aquarium. Only dwarf and calm cichlids, such as apistograms, pelvicachromis, and scalars, will be more loyal to greenery. Of the plants suitable for growing in an aquarium with cichlids, anubias can be distinguished – they have tough leaves and are able to grow without planting in the ground, so they are not afraid of the threat of digging up and eating.