In the basins of major rivers in South America, you can find a group of fish with unusual behavior. Periodically, they take a handful of sand into their mouths and then release it through the gills. From the outside, it may seem that the fish are eating the soil. The name of these interesting representatives of cichlids is geophagous. But why they have such strange gastronomic addictions, you can find out from our article.

Geophaguses (Geophaginae) are a group of ray-finned fishes from the Tsikhlov family. It includes a number of closely related genera that live in South America and are distinguished by a wide variety in body size, color, behavior.

The name of the group comes from two Greek words “geos” – earth and “phages” – to eat. Thus, the esophagus is an “earth-eater”. The Latin name reflects the habit typical of all members of the family to swallow sand from the bottom of rivers. The thing is that a large number of invertebrates – insect larvae, worms, and mollusks – live on sandy and silty glades. Geophaguses capture them together with a piece of the substrate and strain out all the most delicious in their mouths, and the sand is sent out through the gills.

Geophagus is highly prized by cichlid lovers, even though some species require aquariums of 400-500 liters. They also have a well-defined parental instinct.

Geophaguses have a powerful, laterally compressed body. The characteristic feature is a conical head with high-set eyes. A large fatty cap is often formed on it. The mouth is directed downward, with fleshy lips, adapted to eat food from the bottom. The fins are well developed, the dorsal extending from the head and widening near the tail. The caudal fin is single-lobed; its extreme rays can be elongated. The pectoral fins end with the same threadlike outgrowths.

The average geophagous size is 10-12 cm, but there are also large species that grow up to 30 cm. 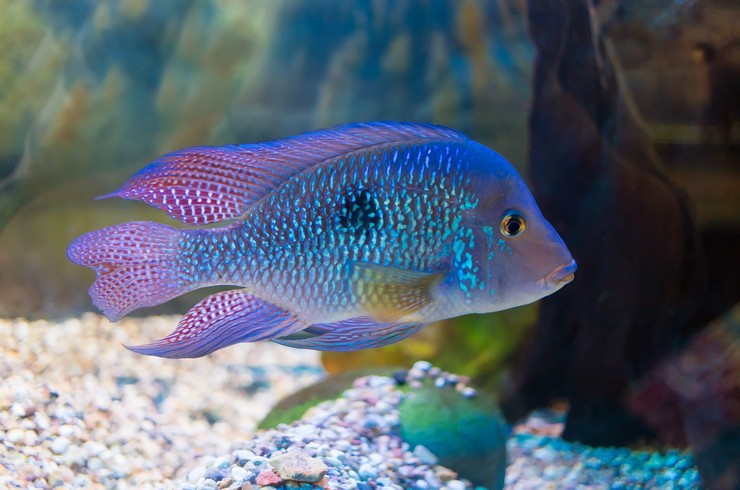 The body coloration of geophagous is different. There are species with yellow-green, olive, bluish, and other colors of scales. Of the general features, one can distinguish the metallic sheen of numerous spots scattered over the body and fins, forming even rows. A small black spot is observed behind the gills in many species. Sexual dimorphism is weak.

Geophagus are inhabitants of the equatorial and tropical parts of South America. They are found in numerous tributaries of large rivers – the Amazon and Orinoco. Geophaguses inhabit a variety of biotopes: they can be found both in fast-flowing rivers and in slow-flowing streams with “black” tropical water, rich in humic substances from decaying leaves and branches. The temperature regime also does not play a special role for the fish. Some species easily tolerate nighttime drops in water temperature up to + 10 ° C.

Keeping geophagous at home is not particularly difficult, because the fish are enduring. However, there are a few things to pay close attention to.

It is best if the geophagous live in the aquarium in flocks of 5 to 15 individuals. In such conditions, they will feel as comfortable as possible. The fish will be more confident and active. Along the way, you can observe the construction of hierarchical relationships between individuals, and the chances of successful breeding increase dramatically. Considering the average size of geophagous, the minimum volume of the aquarium should be at least 300 liters, ideally from 500. 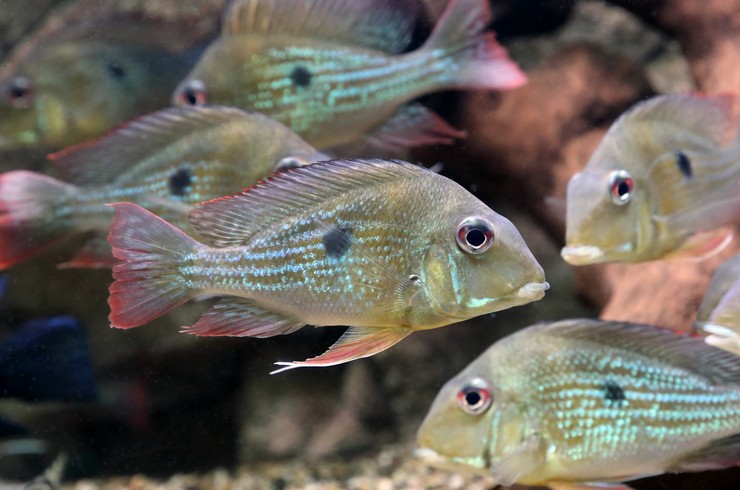 The next important point is soil selection. The desire to dig in it is inherent in the fish at the level of instinct, even though it is no longer necessary for the cichlids to get food on their own. Therefore, the best choice is fine quartz sand, which will allow geophagous to sift it safely through their gills.

The best option for decorations will be natural driftwood and stones, which will make excellent shelters. Driftwood is also beneficial because it releases tannins into the water. The digging of soil by geophagous, unfortunately, imposes some restrictions on the use of living plants in decoration. Fish can easily dig out the roots of the bush, which makes the plant float up. Most often in aquariums with these cichlids, Anubias, Cryptocorynes, Echinodorus are used. The latter two are best planted in pots to avoid damage to the root system. 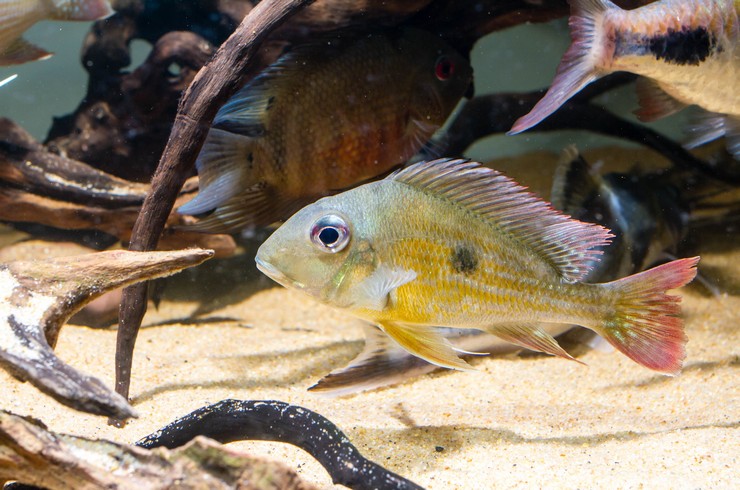 The lighting should not be bright, geophagous prefer a slight twilight. It is important to organize the proper filtration in the aquarium. This, again, is due to the fish’s habit of digging in the sand. During such procedures, a large amount of suspension rises into the water, which will create severe pollution if not filtered out in time. For this reason, it is also necessary to regularly clean the bottom of the aquarium from organic debris. The water should be saturated with oxygen because geophagous are very active fish. This is especially true of species that live in rivers with a rapid current. The thermostat is also necessary when keeping a heat-loving geophagous.

Most geophagous are calm in nature fish that get along well with proportionate species. Pronounced aggression is manifested only during the spawning period.

A flock of geophagous looks best in a species aquarium. But they can easily be settled with neighbors in natural biotopes, for example, other cichlids (scalars, serums), catfish (such as corridors, ancistrus, torakatum).

But the neighborhood with small species is best avoided. Neons, guppies, tetras, rasbora will not be the best neighbors and, most likely, will be quickly eaten. Goldfish (even large ones) should also not be attached to geophagous, which can bite the fins of goldfish, which will end up with their death. 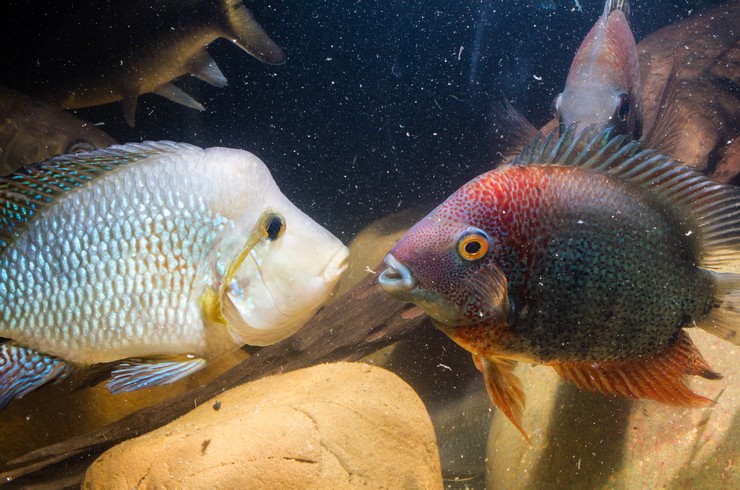 Geophagus are omnivorous fish. Their natural diet is quite varied and includes insect larvae, worms, and pieces of fruit falling into the water. When kept in an aquarium, cichlids should also be offered a varied menu. It is better to refuse live or frozen food. They are unbalanced and pose a threat of contamination of the aquarium with infections. High-quality dry food is devoid of these disadvantages, it has a good effect on the growth and well-being of fish.

Geophagus food is best suited for cichlids with a high plant content, such as Tetra Cichlid Algae Mini or Tetra Malawi. Vegetable fiber is important in the diet, it supports the normal functioning of the digestive tract.

Species with red, orange, or yellow colors are recommended to be fed with natural color enhancers such as Tetra Cichlid Color. Within a few weeks, your pets will become much brighter.

Tetra Cichlid XL Flakes and Tetra Cichlid Sticks are excellent staple foods. They are versatile and suitable for all types of cichlids. These feeds contain selected animal and plant components, as well as a complex of vitamins to maintain health and longevity.

Do not forget to pamper your pets with the Tetra FreshDelica natural treats, they will definitely please your cichlids.